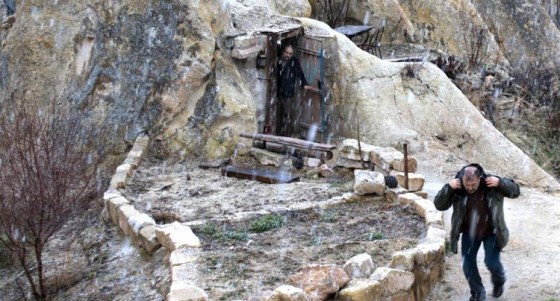 Seemingly preordained, director Nuri Bilge Ceylan’s overdue Palme d’Or win provided a nonetheless satisfying conclusion to a rather undramatic Cannes film festival—and, further, to a closing awards ceremony of otherwise empty gestures and mostly uninspired selections. A two-time recipient of the Grand Prix for Distant (2002) and Once Upon a Time in Anatolia (2011), as well as Best Director for Three Monkeys (2008), the 55-year-old Turkish master had not only history on his side, but an anticipant passion amongst cinephiles that portended something major. What we got was something certainly grand in scope: a 196-minute domestic drama which methodically indexes the internal trials and tribulations of three individuals confined, both physically and psychologically, to a remote, snow-capped enclave in the mountainous Anatolian hinterland region of Cappadocia. In both emotional range and pictorial scale, Winter Sleep easily supersedes anything in Ceylan’s already ambitious filmography.

Hanging in the home of Winter Sleep’s central couple, Aydin (Haluk Bilginer) and Nihal (Melisa Sözen), is an illustration by contemporary Russian artist Ilya Glazunov, known for his impressionistic social realism. Titled “Despair (the Mad Musician),” the sketch was commissioned to accompany the unfinished Dostoevsky novel Netochka Nezvanova, which now survives as a short story. In terms of narrative consequence, the image, a greyscale rendering of two unidentified figures caught in a blizzard, is negligible. However, as a visual analogue for the literal and figurative storms which Aydin and Nihal will be forced to weather throughout the film, it’s appropriately expressive (and so fitting, in fact, that Ceylan has appropriated the concept for the film’s promotional material). The drawing itself is seen most prominently in the second of two extended argument scenes which anchor the middle portion of the film, accruing greater functionality as we witness a painful quarrel between Aydin and Nihal, their endless barrage of verbal abuse as claustrophobic to the senses as the film’s dimly lit interiors. In the absence of natural light, the picture becomes a much-needed window to the outside world.

Aydin, a former actor and moonlighting author researching a book on the history of Turkish theatre, owns the Hotel Othello, an elevated tavern built directly into a vertical precipice amid the Turkish alpines. Aydin’s sister, Necla (Demet Akbag), lives with Aydin and Nihal in the hotel, and together the three of them tend to its day-to-day operations. As the film opens, the grounds are sparsely populated as guests begin to vacate the region in anticipation of winter—one quickly gets the sense of a yearly routine setting in. But when a rock smashes the window of Aydin’s truck while he is travelling into town, dormant tension and resentments surface which threaten to cripple his dominion. “My kingdom may be small, but at least I’m king,” Aydin fatefully professes just before the incident. A subsequent confrontation with Ismail (Nejat Isler), the father of the boy who hurled the stone, is the first of many instances where Aydin’s delusions of grandeur foretell a downfall. In his attempt to discipline the boy, he stirs the ire of Ismail, recently released from prison and on the brink of relinquishing his home to Aydin, who we learn also manages properties in the nearby village. These early sequences, set outdoors in the shadow of the surrounding ridge, are reminiscent, in both tone and visual language, of the exterior reality of Once Upon a Time in Anatolia; they further function as a breath, however brief, of fresh air before a retreat indoors for much of the remainder of the film.

It’s in these indoor scenes, contrasted with persistent snowfall outside, where Winter Sleep configures its formal and thematic elements and thus fosters its power. Despite the aforementioned allusion to Dostoevsky, the bulk of the film carries distinctly Chekhovian overtones. This is essentially an elaborately staged chamber drama, methodically paced and near-uncomfortable in its detailed diagnosis of a patriarchal infrastructure. Ceylan continues to internalize in a similar manner his cinematic influences, transposing the metaphysical inquiries and observational visual sense of Anatolia’s references to Michelangelo Antonioni and Abbas Kiarostami to a more expressly emotive and modulated mise en scène reminiscent of Terence Davies or, most especially, Ingmar Bergman (even Bilginer’s beard can’t help but call to mind Erland Josephson’s warmly seasoned façade, intentionally or not one of the film’s many parallels with Scenes from a Marriage [1973]). As such, Winter Sleep is a decidedly interior experience, both in terms of visceral nuance and in its respect for the materiality of physical space. These characters seems uncommonly attuned to their surroundings, to mostly adverse affect. Impressions of evil permeate the confines, and when Necla, skeptical of her brother’s literary pursuits and artistic persona, then Nihal, who is chastised by her husband for her charity work, decide to express such misgivings, inexorable steps toward self-reckoning commence; where each character arrives, while perhaps inevitable for a film built on equal parts Russian dramaturgy and European psychology, is nonetheless devastating in its comprehensive dissection of domestic autonomy and national identity.

Following the pair of draining verbal altercations pitting each woman’s professional and personal misgivings with Aydin against his own sovereign ignorance, the trio disperses and the film’s focus falls squarely on Nihal, who, strident in her faith in the reciprocity of goodwill and the generosity of the human spirit, experiences the most severe awakening of all when attempting to financially redress her husband’s relationship with Ismail. Despite its restricted setting, Winter Sleep unfolds through a distinct succession of movements, each unique in visual and, in some cases tonal, conceptualization. And yet Ceylan, writing here with his wife and collaborator Ebru Ceylan, balances the behavioural and situational extremes of the narrative (one late scene involving copious amounts of liquor even devolves into outright comedy) with an expert display of thematic integrity and formal coherence. Gökhan Tiryaki’s digital cinematography is particularly ravishing, trading the nocturnal, amber expanses so specific to Anatolia for the rich autumnal illumination and stark white neutrality emblematic of a snowy, isolated summit. A discreet but aching piano theme, meanwhile, is employed on a handful of occasions to both demarcate passages and illustrate gradations in emotion. Together with an ever-developing interest in the nuances of language—each word deeply felt and hung heavy with regret—these aggregate virtues go some way toward reinforcing the notion of Winter Sleep as Ceylan’s most involving, overwhelming film to date.

Finally, a brief coda effectively reunites the couple on screen without actually bringing Aydin and Nihal into physical proximity, again breaking with Ceylan’s established narrative syntax while serving as both formal reprieve and moral rejoinder. Framed as a kind of classical montage, and yet told in only a few stirring shots, the sequence offers a seemingly remorseful Aydin speaking in voiceover in a first-person address to Nihal, who we watch seated in a state of quiet contemplation, dismayed at an inescapable evil she once believed to be an isolated trait. It’s an at once deeply felt and dire summation of a relationship that will likely perversely persevere despite, or perhaps because of, its inherent contradictions. As Winter Sleep closes, Aydin and Nihal’s proverbial winter of discontent may appear to have reached a tenuous state of serenity, and their future remains not only ambiguous, but unmistakably volatile. Such thematic paradoxes are indicative of a filmmaker whose unique methodology has somehow consistently produced such bleakly beautiful work and, indeed, whose fascination with the most damning dimensions of the human condition have only grown more universal as his parables have become ever more intimate. It’s thus tempting to consider this moment, and this film, a rare instance of critical and creative harmony—Ceylan’s perfect storm.

Posted in CS59, Festivals, From The Magazine, Spotlight