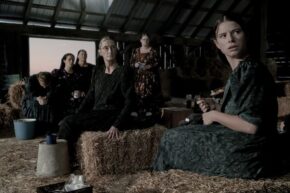 Sarah Polley’s adaptation of Miriam Toews’ 2018 novel Women Talking is set in a remote Mennonite community that exists out of time and under its own jurisdiction, with its own rules and superstitions. For years, the nocturnal disturbances that left local girls and women bruised and bleeding were thought to be a result of divine retribution, demons, or “female imagination”; it was later discovered that their collective nightmare was, in fact, repeated sexual assaults carried out by men armed with animal tranquillizers, many of whom were brothers, cousins, or uncles of the victims.
Read More →

By Winnie Wang The nocturnal attacks against the Mennonite girls and women, it turns out, weren’t ghosts or retributions for their sins, but a recurring collective nightmare in the form of repeated sexual assaults carried out by men armed with animal tranquillizers. After one assailant is identified and threatened with a scythe, the men of…
Read More →

By Winnie Wang Brian D. Johnson’s second feature documentary is abundant with close-up shots of ink blooming into pools of colour. The pigment diffuses onto paper, branching into dendritic configurations that bear resemblance to fluvial processes. Water carries sediment from one place to another, depositing material to compose new arrangements. The Colour of Ink could…
Read More →

By Winnie Wang Amidst stark plains and interiors in rural Missouri, 18-year-old Haas (Hannah Schiller) is faced with an uncertain future after the sudden death of her father Al, an outcast burdened with debt and dubious plans to flip properties along the Mississippi River. Alone with a house pending foreclosure, her most pressing concern is…
Read More →

By Winnie Wang In his follow-up to Mariupolis (2016), the late Lithuanian filmmaker Mantas Kvedaravičius returns to the Ukrainian city of Mariupol to document the devastating effects of the 2022 Russian invasion as it unfolds. Composed entirely of verité footage, Mariupolis 2 follows a group of displaced citizens who struggle for survival in abandoned houses…
Read More →

By Winnie Wang Lynn (​​Yao Honggui), a young flight attendant in training, shuttles tirelessly between odd jobs modelling at a jewelry store, assisting her boyfriend with a clothing business, and selling medical masks. Her mother runs a fertility clinic, but prefers to climb the ranks of a multi-level marketing scheme for a skincare company that…
Read More → 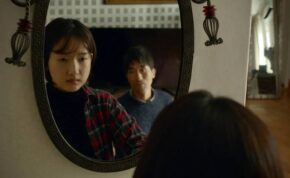 By Winnie Wang In Hong Sangsoo’s Tale of Cinema (2005) a depressed young man reunites with a female former classmate through a chance encounter and joins her after a night of emotional conversations and heavy drinking in an impulsive suicide pact. In a hotel room, the two take turns swallowing sleeping pills collected from pharmacies…
Read More →