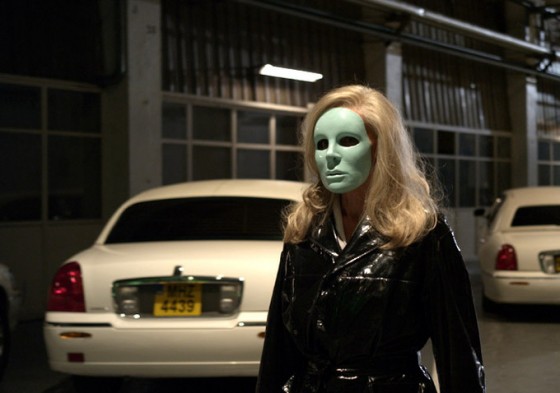 The media gauntlet is so much a part of the Cannes infrastructure that Leos Carax’s decision to withdraw from it was both bold and telling. Despite having one of the most talked-about films at this year’s festival with Holy Motors, Carax granted no interviews, and his public pronouncements were confined to a few terse aphorisms at his press conference. Uttered in response to generally clueless goading, his curt statements said more about his new film—and his idea of cinema as an all-consuming force—than most of the frenzied critical responses, pro and con, put together. More than one journalist wondered about the meaning of the film and the wisdom of foisting something so strange on the moviegoing public. Carax shot back: “I don’t know who is the public. All I know is it’s a bunch of people who will be dead very soon.” You could say that Nanni Moretti and his jury agreed. A few days later, in picking Michael Haneke’s Amour over Carax’s amour fou, they opted for an allegory of the death of the art film (and its audience) over a glimpse of its possible reanimation.

Carax attested to the pull of the dead, the past, when he described cinema as “a beautiful island with a big cemetery.” But he also implicitly warned against the practice of checklist box-ticking that often doubles for criticism when it comes to his films: “I have always hated that word ‘reference.’” It is of course hard to talk about Carax’s films without also talking about the films he clearly loves, beginning with the pantheon of French cine-poets that includes Vigo, Epstein, Grémillon, and Cocteau. Even more than his previous films, Holy Motors invites a cinephile game of spot-the-allusion, with Edith Scob in a face mask and Kylie Minogue in a Jean Seberg hair-do, not to mention a full-flight Denis Lavant, evoking as always the pathos and playful anarchy of Chaplin and—as the “Denis Lavant x 11” closing credit emphasizes—the malleability of Lon Chaney.

The rampant intertextuality is not in service of nostalgia but in the spirit of reclamation. Carax thinks of classic cinema not as fodder for citation or imitation but as communal dream material, to be mined for something new and mysterious (an attitude shared by the year’s other great movie, Miguel Gomes’ Tabu). Complete with a Lynchian prologue (in which the pajama-clad Carax emerges from his bedroom, through a secret passageway, into a movie theatre filled with silent spectators) and an accordion-scored entr’acte, Holy Motors is as close as Carax has come to an artistic manifesto: a film about life as cinema and cinema as life.

Chauffeured around Paris by a chicly creepy assistant (Scob) in a stretch limousine-cum-dressing room over a long day and night, Lavant’s Monsieur Oscar fully inhabits the pre-assigned roles of a hunched bag lady, a feral leprechaun, the father of a teenage daughter, an assassin, his döppelganger victim, an old man on his deathbed, and so on. Each costume change, determined by the instructions in a series of dossiers, occasions a shift in tone, a dalliance with a new genre. By the end, Holy Motors has traversed vast expanses of film history, going from monster movie to film noir to domestic drama to musical, and even collapsed the entire trajectory of the medium: one of Lavant’s missions turns him into the disembodied object of digital motion-capture, but just as often, he calls to mind an original man of cinema, a subject of one of Marey’s locomotion studies (snatches from which bookend the film).

The episodic form is, on one level, an open acknowledgment that Carax’s films advance less through narrative mechanics than through a principle of thrill seeking, always in search of the next convulsive delirium. What’s new is the overt, albeit open-ended, philosophical resonance of the conceit. Boy Meets Girl (1984), the title of Carax’s first film, describes the plot of his first three (and even of Pola X [1999], in which the “girl” is a phantom embodiment of personal and First World guilt and self-doubt). In Holy Motors Carax sidelines his customary subject of an outlaw romance in favour of an enigmatic, multiply allegorical scenario. Who is Monsieur Oscar and what motivates his play-acting routine? For whom is Oscar performing? Are the cameras and viewers simply out of view? Were they ever there? Does an actor without an audience even exist, and, if so, on whose terms? There are no clear-cut explanations, just a few clues along the way—we surmise that this professional shape-shifter is but a worker in a dream factory, but that he also does it for “the beauty of the act.” (The phrase calls to mind the eerie reenactments of Tom McCarthy’s brilliant novel Remainder, whose monomaniacal hero is compelled to achieve “tingles” of authenticity through the elaborately inauthentic practices of staging and repetition.)

Of all the movies visible in the rearview mirror as Holy Motors glides from one destination to another, none are more pertinent, more poignantly invoked, than Carax’s own. Lavant, who played a character named Alex in their first three films together (Leos Carax is an anagram of Alex, the filmmaker’s given name, and Oscar), also reprises the red-bearded terrorist-troll of their 2009 short Merde and, for the film’s emotional climax, returns to the charged vicinity of the Pont-Neuf, this time venturing into the iconic Art Deco shell of the now-empty Samaritaine department store.

This is hardly mere navel-gazing but the concerted effort of an obsessively personal, even private, artist to create a summa, to mourn a past, to imagine a future. Holy Motors, it bears remembering, is only the fifth feature in a sporadic career, one increasingly dogged by questions of what a boy genius does for an encore. If the cinema of Jean Vigo, cut off in its prime, remained forever that of a young man, Carax, a 51-year-old who was most productive in his 20s, is still synonymous with the reckless euphoria of his early work. After the sustained head rush of Boy Meets Girl, Mauvais sang (1986), and Les amants du Pont-Neuf (1991), Carax endured a hiatus of nearly a decade before Pola X, and an even longer one after. Haunted by its predecessors and by the unwritten chapters that have become central to his cinéaste maudit legend, Holy Motors has the pent-up energy of a first film. But Carax’s grand gestures signify differently these days. Pola X marked a turn, from a cinema of adolescent intensity to one of apocalyptic urgency, from the excessiveness of first sensations to the enormity of the end of things.

It is impossible to miss the odd funereal glow of the new film (Carax’s first feature shot on digital), which returns after each rendezvous to the coffin-like enclosure of the limo. The Paris of the movie is still a repository of nocturnal mystery but somehow less alive than the city-playground of Carax’s previous films, a touch synthetic (and, in moments, even data-moshed). No less than Pola X, a rumination on failure in the wake of a commercial disaster, Holy Motors is a defiant stare into the void: a demonstration of movie enchantment in the twilight of cinema, an assertion of physical presence in a virtual world. Some of the film’s holy motors—present in both man and machine, in the wired guts of elaborate contraptions and in sense and muscle memory—are nearing extinction but some are eternal. Nearly 30 years ago Boy Meets Girl convinced Serge Daney “that the cinema will go on, will produce a Rimbaud and a ‘Poet at Seven Years’ against all odds, that it will start again at zero, that it will not die.” That cinematic Rimbaud is now middle-aged, and those words are no less true.