This Is Martin Bonner (Chad Hartigan, US) 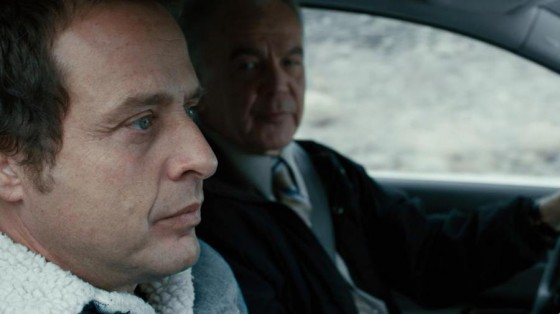 Chad Hartigan’s This Is Martin Bonner tells a simple story: two fiftysomething men develop what can only be described, in clichéd trailer-speak, as an unlikely friendship. Thankfully this proves less precious than it sounds. Its men are serious, world-weary, and inhabited so naturally by their performers that they seem to carry the weight of lived experience. This is particularly true of Travis Holloway, about whom everything seems tentative. Played by Richmond Arquette, lesser-known brother of siblings Rosanna and David et al, he has the look of a man who has long ago learned to stay quiet and keep out of the way, receding into his surroundings as if he might will himself to fade through them. He is evasive, meek, weary of something constant but unspecific. He often stares blankly into the middle distance, not so much lost in thought as consumed by it. We first see him walking in the gravel alongside the sort of broad rural road not meant for pedestrians, sullen face cast downward, his hands plunged way down into the pockets of his wool-collared jean jacket. Travis, we learn, has just been released from a state prison in Reno, Nevada, after serving more than a decade for a one-time drunk driving incident—“I’ve never been to Reno,” he observes, “but technically I’ve lived here for 12 years”—and his every word and gesture is inflected with the fear that he may find himself suddenly banished there once again.

Travis is, in a sense, the quintessential Foucauldian body: years of confinement have conditioned him to defer to authority and internalize institutional surveillance, his punishment and ostensible ‘rehabilitation’ ironically rendering him uniquely unsuited to life on the outside. Part of the problem is that Travis is incapable of regarding himself as anything but a convict. What the system calls “reintegration”—the process by which an ex-con rejoins society as a high-functioning contributor to it—is a matter not only of learning to adapt to the rhythms of freedom, but also, perhaps more significantly, of learning to identify as legitimately free, of accepting that 12 years of purgatorial existence have been swallowed up by the state but that life, to invoke a useful cliché, must go on all the same. It is clear in his face, often lingered over in spare close-ups, that Travis is not so much haunted by his past mistakes as he is hollowed out by their consequences. His sins have been atoned for; he has been both legally and morally exonerated.

He finds a state-approved job as a tollbooth operator with very little effort, he has a comfortable if unglamorous place to stay, and society, as it were, seems quite willing to embrace him. What’s difficult is just living: Travis Holloway’s most unconquerable struggle is to simply be comfortable enduring the mundane. The film’s pared-down, almost ascetic manner thus finds its focus in the quotidian, in the long moments of repose afforded to a man without much direction or purpose. Hartigan never shows us the inside of a prison, but his depiction of the arid Reno desert—littered with rundown commercial strips and one-storey motels, the lot of it sun-bleached and wholly uninviting—is similarly oppressive, its wide-open spaces conveying not so much freedom as a different kind of restraint.

Adrift in a transitional limbo, Travis is both joined and aided by the eponymous Martin Bonner (Paul Eenhoorn), an Australian emigre finding it difficult to settle into life alone in Reno. Martin, a longtime employee of an East Coast church, recently suffered what he refers to flatly as a “crisis of faith”, one which, coupled with an unexpected divorce, effectively torpedoed any semblance of his economic and familial stability. After two years spent exhausting his resources and literally bankrupting himself searching for suitable work near home—“I applied for a manager position at Starbucks”, he explains, “but I didn’t even get an interview”—he finds himself shuttled across the country to take what is apparently the one job for which his background and experience are considered pertinent, as a mentor and volunteer coordinator for a Christian nonprofit organization established to assist recent ex-convicts transition more seamlessly into a new career and an ordinary life.

This is a career that naturally requires patience, tolerance, and a basic desire to help other people—qualities that, for a recently displaced fiftysomething resigned to abandon his family in desperation, are doubtless in short supply. But Martin proves qualified for more surprising reasons. Eenhoorn, who proves both a perceptive and nuanced performer, has a natural warmth to his person, almost a radiance, which often seems at odds with the disposition of his character. This results in an intriguing friction. On those frequent occasions when, for instance, Martin calls his somewhat estranged son, a trendy SoHo artist with a burgeoning career, the messages he leaves seem justifiably impatient and frustrated, his loneliness in Reno compounded by the feeling that he is rapidly losing touch with someone he loves. And yet Eenhoorn’s voice has such a natural affection and sincerity that these calls somehow avoid even the slightest hint of irritation or passive-aggression. In this and other cases, Martin becomes a man who, though at maybe the lowest point of his life, cannot help but seem appealing.

This may account for why Travis, though he has already been assigned a perfectly competent post-release mentor, finds himself gravitating to Martin for supplementary guidance, insisting that they meet for coffee and tagging along to Martin’s weekend gig as volunteer referee for a local girls’ soccer league. Martin hardly seems to encourage the development of this relationship, and in a way he doesn’t even seem particularly receptive to the idea. But Travis sees in Martin the same seemingly incompatible qualities that make him so compelling as a protagonist: the crisis of faith which has so greatly disrupted the security and constancy of his former life has made Martin a good man rather than a saintly one, a representative of the church whose devotion has curdled into something like a jaded hope. He is a damaged man but basically still a good one, and if he lacks what he might have once considered a higher calling it has been replaced by a sober outlook and a more acute understanding of pain. Travis senses that there is more to Martin than the religious dogma and self-help rhetoric on which the institutions in his life are founded, because he perceives in him not an enlightened messenger of God but a man still figuring things out for himself. He sees, in other words, a man enough like himself that he may be able to help.

Travis, of course, eventually does require the assistance of his newfound friend, seeking a steady hand to guide him through a lunchtime reunion with the daughter he has not seen in years. Lacking the nerve to ask explicitly for help, Travis invites Martin along under false pretenses, and it is a credit to Hartigan’s unsentimental view of these characters that he permits Martin to promptly excuse himself from lunch when he realizes that he has been deceived. Travis is left to fend for himself, fumbling through an awkward exchange at a Denny’s-like chain diner without the slightest notion of how best to navigate the tumultuous emotional landscape before him. His daughter, Diana (Sam Buchanan), seems about as amenable as possible given her age and the circumstances, and though she remains sympathetic to her father’s efforts, Hartigan depicts their attempted reconciliation as authentically strained. The film suggests that the best one can hope for in the pursuit of redemption isn’t that everything will go back to the way it was before, but merely that the prospect of happiness will emerge at all. When Martin returns to the restaurant mid-meal, compelled despite himself to help Travis see this through, the gesture represents, for Travis, something like divine intervention. His sign is meager but legible: he can get through this.

The sentiment may be somewhat mawkish, but Hartigan’s articulates his ideas with such understatement that they are ultimately quite affecting. There is something refreshing about a twentysomething American filmmaker engaging in earnest with concepts like faith and spirituality and redemption, themes roughly as unfashionable as, say, making a movie about men in their mid-50s developing an unlikely friendship. Hartigan tempers the sentimentality of his premise with an equally uncommon formal rigor, shooting largely in precisely composed long takes and glacial 360-degree pans, attuned to the psychic effects of the landscape and the articulating the pain felt by his leads through suggestion rather than explication. The result has a certain sophistication—and not only of style, but, more impressively, of expression. Hartigan is establishing himself as a filmmaker whose interest in interior drama and patience in conveying it distinguishes him from the bulk of his young American-indie contemporaries, whose youth typically proves evident in their approach. It is common enough for older filmmakers to make what is described as a “young man’s” film. Hartigan has done the opposite.

Posted in Currency, Web Only