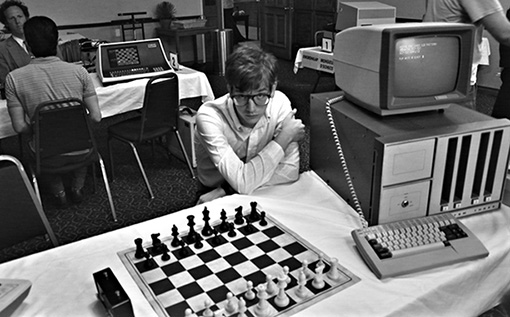 First of all, apologies for the quality of this issue, and this editor’s note in general. I take full blame when things go wrong at Cinema Scope headquarters, which for the better part of six weeks has been in hotel and conference rooms in Rotterdam, Berlin, Mexico City, Guadalajara, and Austin, oh, and on airplanes galore, where I am finishing up typing this, and trying to figure out how best to explain the shambles that lies before you. But I guess I just explained that (with equal blame being placed, to be fair, on both me and the festivals). Man, writing on airplanes, there’s nothing like it.

Let me stop myself before I go too far, because this isn’t a good strategy. Nothing is wrong with this magazine or this editor’s note. Rather, this is all a bit crazy, and of course we all go a bit crazy sometimes. Crazy in a good way, like a film such as Andrew Bujalski’s Computer Chess, or Joseph Kahn’s wonderful, underappreciated Detention (that I regret we did not pay more attention to upon its theatrical release: buy it on DVD, Blu-ray, or VOD today—I did, and I never buy Blu-rays). Crazy like a photo collage emerging from the blink of an eye whilst watching a Tony Scott film, or a lengthy appreciation of the late Michael Winner. And batshit crazy like Canada’s own Silver Bear winner, Denis Côté, whose Vic+Flo is unlike any Canadian film you’ll see this year. (Though to be honest, I think there might be a Canadian-Filipino co-production that ramps up the level of craziness emerging hopefully in the very near future.)

So, there are lowlights, sure, but we’ve covered them up with pretty pictures, and I guess there are some highlights. I only wish there were more filmmakers (and critics) who could take themselves in unfamiliar directions once in a while, because we’ll continue to cover them, I guarantee it. And that’s where the Top Ten comes in. Before I run out of both paper and head space, I’m going to once again turn to archive-making, as this is where we commit last year’s Top Ten to paper (it’s already been released online, as maybe some of you know). Rules have been described repeatedly elsewhere, and I don’t like to repeat myself, so if you’re curious, I suggest either going to your local university library and demanding they subscribe to Cinema Scope, or doing the same thing yourself. And live paper is better, bumper stickers will be issued.

Posted in Columns, CS54, From The Magazine