The Master (Paul Thomas Anderson, US)

Gabe Klinger/CS52, Currency, From The Magazine 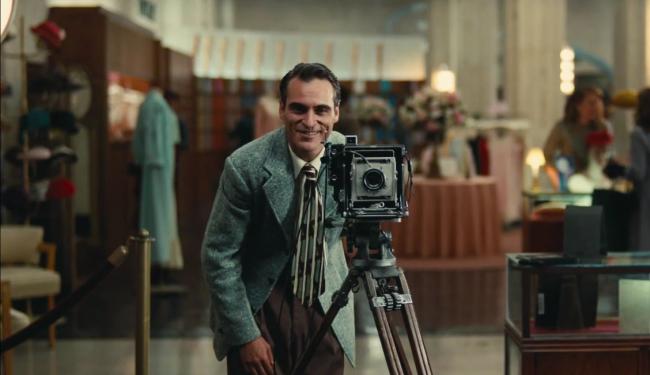 The evolution in Paul Thomas Anderson’s oeuvre towards impeccably researched, stunningly visualized mythological explorations of the American character in There Will Be Blood (2007) and The Master represents a starling 180-degree turn. Staying within a certain autobiographical comfort zone in his first four features—Hard Eight (1996), Boogie Nights (1997), Magnolia (1999) and Punch-Drunk Love (2002), which, seen together, comprise something of a subjective history of contemporary Los Angeles—the recent films ambitiously work to place Anderson’s omnipowerful magnates against a sprawling historical tableau, expanding his temporal and geographical reach by decades and to far-flung corners of North America and beyond. Simply put, Anderson has become a more inherently interesting writer, researcher, social critic, and painter.

Discarding ensemble pieces in favour of intimate character studies, he has opened his films up to more focused performances, with Daniel Day-Lewis’s Daniel Plainview being arguably his greatest creation. There Will Be Blood announced the end of a protracted calling-card phase in Anderson’s career, and The Master, an equally impressive achievement, confirms that his intent is a serious one. Like Stroheim with Greed (1924) or Vidor with The Crowd (1928), his cinema has entered its visionary stage—and boy, let’s hope it stays in it. Anderson may still get called out for his narrative imperfections (see Adam Nayman’s summary of PTA’s faults and virtues in Cinema Scope 50), but there isn’t a cinephile on the planet—at least none in my own midst—who isn’t salivating to see what he does next.

Bringing to mind Sam Fuller’s The Steel Helmet (1951), one of the earliest shots in The Master is a dramatic close-up of a battle helmet donned by Freddie Quell (Joaquin Phoenix), presumably at the end of his term as a Navy man in the Pacific theatre. Much later, Quell will announce that he obtained 13 battle stars and how he was on the “boat that saved the war.” Anderson sets the tone with General MacArthur’s speech aboard the USS Missouri as we see Quell crawling around in the lower depths of a torpedo vessel and hanging aloft in the masts of a battleship, his fellow seamen hurling objects at him (like many shots in The Master, this moment doesn’t seem to be compatible with any plausible reality). Proceeding into peacetime, Quell and several other recruits are hanging out on a beach where they sculpt a large-breasted figure in the sand. In the first indication of his full-scale lunacy, Quell begins to make love to the inert siren.

And the post-war drift begins. Back on the continent, Quell lands work snapping portraits at a department store (perhaps the most lovingly recreated period details in the film are the Technicolor-tinged master shots of Freddie’s subjects). After an unprovoked row with a customer, Quell moves on to cabbage fields tended to by what appear to be formerly interned Japanese. Disenfranchising himself from every itinerant task presented to him, he winds up sneaking onto a luxury ship in the San Francisco bay chartered by one Lancaster Dodd (Phillip Seymour Hoffman), or “Master,” a self-professed philosopher, physicist, author, and sea captain, but most of all a spiritual leader of dubious origin. Having recently parted ways with one cause, Quell’s troubled loner latches onto Master’s “The Cause,” which is based on the belief that men are plagued by the failures of their former lives, and that they must tame their animal instincts in order to reach the innate perfection of their psyches…or something. If you haven’t already connected the dots to this belief system’s lunatic real-world, multi-million dollar institution, you probably live under a rock.

Beyond passing out flyers, subjecting himself to sadistic examination, or taking book-jacket photos for Dodd, Quell evolves an ambiguous henchman relationship with Master in the way he goes so far as to brutally assault those who dare question the Cause’s methods. Though the off- and on-screen violence in The Master certainly lingers in the mind—one questions whether these confrontations initiate solely from Quell—it’s the powerful suggestion of Dodd’s influence on his environment in certain enigmatic scenes that reverberate chillingly. An orgy hosted by Master that would resemble Eyes Wide Shut (1999) if Kubrick had transplanted the setting of his film from the wealthy ‘burbs of New York City to the boonies of Wisconsin, is something like the salacious height of The Master’s abstruse portrayal of the Cause.

The Master settles on a strategy of presenting scenes concerning the relationship of Dodd and Quell parallel to oblique depictions of the Cause’s activities. Quell rarely seems up to the tasks presented to him, unless they involve physical contact, or him concocting paint thinner hooch to consume together with Master. Even when Master engages in extended interrogations of Quell—these lengthy sequences present Phoenix with the opportunity to exhibit his most impressive range of facial contortions—the revealing of a wounded past relationship with a girl named Doris is emotionally devastating but never sets up the character for a total immersion. “Perhaps he’s past help,” concludes Dodd’s wife Mary Sue (Amy Adams), a discreet influence on Master who is seen, in one of the film’s truly oddball moments, ferociously masturbating her husband in the bathroom.

Much of The Master builds up to explosions, and while there’s no denying that the different displays of Master’s outlandish theatre of pseudoscience evidence a superior design and execution, Anderson’s continued reliance on “show-stoppers” (per Nayman) to advance the drama remains mildly troubling. To his credit, Anderson has at least come to the conclusion this time around that he doesn’t need to go out with fire and brimstone—no milkshakes drunk, no frogs. Significantly, too, The Master does not look as elegant as There Will Be Blood. Its visual palette is more varied and less predictable. In addition, much of the film’s sombre action is moderated with humour (Quell is ultimately tragicomic), and significant departures are made from the storyline that seem owed entirely to last-minute editing decisions (Anderson has confirmed this, at least of the film’s final shot). The Master’s skewed chronology and elliptical editing are perhaps two aspects of the film that will reward on a second viewing.

Lastly, it might be worthwhile to explore some of The Master’s thematic divergences from There Willl Be Blood. If the earlier film suggests the corrosive power of industry (oil), let me propose an opposite formulation for The Master: the corrosive industry of power (religion). Much will be made of Phoenix’s Quell, whose psychotic outbursts are spectacularly envisaged, but it’s Dodd who is the genuinely seductive creation, and Hoffman’s uncanny embodiment of the title epithet is the subtler, more rewarding performance. (Perhaps Hoffman’s recent stage turn as Willy Loman in Death of a Salesman helped the actor form the basis for Master’s period affectations.) Quell progresses through the narrative largely unchanged, while it’s evident that Dodd grows more powerful and resolute. A frustration of The Master is that Anderson never fully decides which character he is more invested in—superficially, he might have gained more from Dodd. Quell starts and ends on the beach, a spectral, unresolved presence. By bookending the film with these images, Paul Thomas Anderson suggests that Freddie Quell may have never existed.