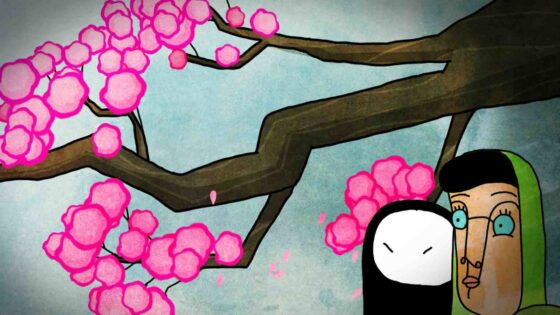 Though it’s a bit scrappy on first glance, Window Horses director Ann Marie Fleming’s drawing style has a good story behind it. After surviving a car accident while she was an animation student, Fleming resorted to the barest of shorthands in her minimalist sketches of a character she called Stick Girl, made entirely out of a circle, some triangles, and a couple of angular lines standing for her eyes—a self-conscious nod to her Japanese-Canadian heritage, perhaps in the tradition of Frida Kahlo’s unibrow-heavy self-portraits. Window Horses turns Stick Girl into Rosie (voiced by Sandra Oh), an aspiring Chinese-Canadian poet who begins to explore her heritage on her father’s side when she is invited to participate in an Iranian poetry festival.

Though it is tempting to read that personal, handmade style as minor, it makes Window Horses a lot more charming than it might have been given its relatively simplistic take on poetry and Persian culture. Fleming handles the educational material aimed at children here pretty well, offering tidy introductory stories about the historical and aesthetic baggage of the poets Rosie meets. (No such luck for a snarky German bro named Dietmar, who at least has the good fortune to be voiced by Don McKellar.) She’s aided there by her time-tested conceit—no better way to introduce a new world with very specific rules than through the perspective of a young initiate who doesn’t know any better than we do—as well as her cast. Oh’s unassuming, modest vocal work makes Rosie an ideal identification point, the naïf who just wants to know more (so we can learn over her shoulder), and Shohreh Aghdashloo makes for a velvety, unpretentious tour guide as the festival’s master of ceremonies.

One wishes, though, that the central narrative line wasn’t so scrawny, just as one might have hoped for more grit and specificity from the only fleetingly compelling B-plot about the history of arts and culture in Iran—probably too big a subject for stick drawings, however much they may be Fleming’s signature. Rosie’s belated search for her father is affecting but in the end too familiar, and the film’s insistence upon her preciousness grows tiring in light of the more devastating personal and political stories unfolding all around her.