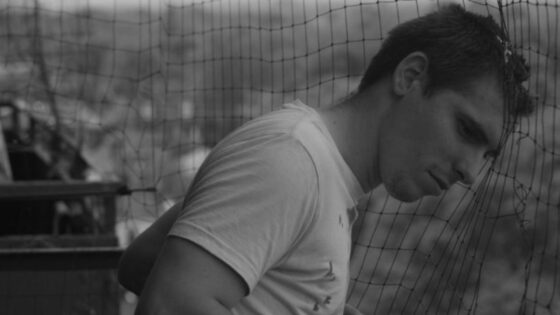 Tales of Two Who Dreamt

“This film tells the story of a boy who turned into a bird.”

Portending something fantastic, these are the first words spoken in Tales of Two Who Dreamt, a cagey new feature co-directed by Andrea Bussmann and Nicolás Pereda. Set in an anonymous, rundown apartment complex on the margins of Toronto, this small-scale portrait of an asylum-seeking community shot on black-and-white digital video is a contemporary work in the truest sense. Emblematic of a post-millennial trend in independent cinema that freely combines elements of narrative and nonfiction storytelling, the film unfolds in a highly reflexive manner, as if in a state of constant regeneration as its main characters, a family of Hungarian Roma immigrants, tell and discuss stories from a script written for a forthcoming film. Bussmann and Pereda at first observe and then mediate the process, alternating extended sequences of readings and preparation with scenes of the actors performing each episode (including that of the young bird-boy, outfitted with makeup and a rubber beak). Little by little, the film absorbs its provisional trappings, blossoming into a fable of existential ennui and alienation that turns quotidian existence into something stranger than any fiction.

Following its premiere at the Berlinale and its Stateside bow at New York’s Art of the Real, Tales of Two Who Dreamt was the most high profile selection of the inaugural Future//Present program at the 35th Vancouver International Film Festival. Comprised of eight Canadian features by ten directors—all, save for Pereda, making their feature debuts—the program represents a significant, if belated, gesture of recognition for a new generation of young Canadian filmmaking talent that has emerged over the last half-decade. Like the work of contemporaries Matt Johnson, Anne Émond, Kazik Radwanski and Andrew Cividino, the films in the Future//Present program speak to both a distinct national sensibility and a broad cinematic outlook, applying a number of styles and narrative techniques to stories as culturally specific as they are universally engaging. Indeed, that the stories told in Tales of Two Who Dreamt were nearly prosaic in comparison to those featured in many other titles speaks to the vision of Bussmann and Pereda’s peers: ambitious and preternaturally assured, these filmmakers brought no shortage of ideas to a program poised to both bolster a festival that’s recently scaled back on some of its more adventurous programming, and embolden this new filmmaking demimonde as institutional funding for Canadian independent cinema continues to come under fire.

Taken as a whole, the program played something like a microcosm of contemporary indie trends and assorted nonfiction impulses, Canadian and otherwise. Reminiscent of such recent poetic reveries as Northern Light (2013), Tired Moonlight (2015), and the work of Roberto Minervini, Lights Above Water, co-directed by the team of Nicolas Lachapelle and Ariel St-Louis Lamoureux, takes an observational approach to its depiction of a group of First Nations children in Waswanipi, Québec, who spend their days playing, dancing, and innocently bonding over a shared, culturally burdened upbringing. Shot over the period of one year, the film discreetly folds its organizational and sociopolitical particulars into a weightless 60-minute whole, its form and subtle narrative trajectory emerging in bursts of adolescent imagination. By comparison, another Québécois director, Lawrence Côté-Collins, makes only provisional gestures at concealing the fictitious parameters of her film Écartée, in which she stages a convoluted and increasingly humorous story of a filmmaker living with a middle-aged ex-con and his vivacious girlfriend in suburban Québec. At a glance a conventional, if strange, documentary about an odd couple with odder hobbies (he constructs 3D puzzles, she collects dolphin-related trinkets), the film quickly announces itself as a blatant fabrication as the director becomes an increasingly prominent character in her own film, her presence wearing on the husband’s nerves just as her flirtatious advances toward the sexually frustrated wife prompt an additionally volatile dynamic. Luckily, the film’s increasingly farcical tone is largely tempered by Côté-Collins’ incisive critique of nonfiction tropes and the ethical quandaries documentary filmmakers must confront in their quest for truth.

Toronto’s Sofia Bohdanowicz arrives somewhere honest and heartfelt with Never Eat Alone, a work of speculative fiction that subtly brings the past to bear on the present through an uncommonly intimate appraisal of history and biography. Shot at a tranquil, contemplative remove, the film patiently follows a widowed television actress (Joan Benac) whose one-time co-star’s romantic overtures, including a final plea to not go through with her marriage, continue to haunt her memories and elicit regret. Belatedly attempting to reconnect with her would-be lover (George Radovics), the elderly actress enlists her granddaughter (Deragh Campbell) to secretly search for the man by sifting through the CBC archives for any information she may be able to uncover. Interspersed with evocative archival footage of Toronto’s Casa Loma, where the two actors performed in a mid-century television musical, the film is imbued with a historical gravity that finds personal expression through Benac’s touching recollections, Campbell’s graceful attentiveness, and Radovics’ thoughtful, wordless reflections. Bohdanowicz’s approach to the material—both the director and her two actresses are credited as screenwriters—is well-considered and judicious. This is a film about nostalgia that never leans saccharine or overly morose; instead, a gentle melancholy courses between its aging protagonists, who, though separated by time and distance, live together in the memory of an era that set them on diverging paths.

Even the program’s more traditional narratives found memorable means of expression. The Lockpicker, by Calgary’s Randall Okita, tells its story of a disenchanted teen boy who grows increasingly resentful of his malicious classmates through a wintry visual palette and a meticulously shaped sonic environment. With its suspended pace and high-contrast black-and- white cinematography, Montreal experimental filmmaker Karl Lemieux’s Maudite Poutine, a backwoods revenge saga-cum-parable of brotherly bonds, is as reminiscent of the road movies of Wim Wenders and Jim Jarmusch as it is of its director’s evocative visuals for post-rock figureheads Godspeed You! Black Emperor. And what in other hands might be a tired tale of co-dependent teen junkies is, in Werewolf, rendered sensitive and ultimately tragic through Nova Scotia-born director Ashley McKenzie’s discreet storytelling and austere, resonant imagery. That each of these films manage to parlay their familiar setups into something far more intriguing speaks to these filmmakers’ shared desire to enliven narrative cinema by subtly reshaping its conventions.

The most daring and original Future//Present selection, however, was the one that did away with convention altogether. The Intestine, a hauntingly beautiful work by Toronto-based Lev Lewis, is a work that thrives on its ability to confound while instilling genuine curiosity as to its intent and possible meanings. When Maya (Melanie Scheiner), a young woman with a drug-addicted mother and an unfulfilling job, wakes up alone in a luxurious house after a one-night stand, she doesn’t appear concerned or confused as much as consumed by her posh surroundings—so much so that she decides to make herself at home while her lover remains mysteriously absent. Is Maya dreaming? Did something grave befall her partner, a man who, in the film’s first scene, we see breaking up with his boyfriend and whose concerned sister (Claudia Dey) remains unconvinced of Maya’s story? What begins as a study of isolation and emotional languor moves methodically into the realm of metaphysical mystery as Maya’s curious connection to the house prompts a dispute over the property and, by extension, Maya’s newly constructed identity.

Shot in dreamy, impressionistic hues by cinematographer Nikolay Michaylov, The Intestine utilizes space and domestic interiors as loci for psychological paralysis in a manner that can’t help but call to mind Todd Haynes’ Safe (1995). And like Haynes, or, more recently, the work of Joanna Hogg, Lewis seems drawn to the more ineffable aspects of feminine identity, tracing connections between characters and their physical surroundings through austere compositions built around negative space and stark architectural designs. When Maya’s mother passes—an event that appears to be just one last inconvenience passed from mother to daughter—her interests shift solely to that of the house and its proprietorship. An allegory for the quest for female autonomy, perhaps, or a comment on the existential correlations between people and the places they occupy? In either case, the film is consistently involving and thought-provoking even as it offers no firm answers. At once emblematic of this new generation’s burgeoning creative constitution as well as its cinephilic bona fides, Lewis has, with The Intestine, decisively joined the ranks of a national scene that is reimagining established modes of production. As the best of the Future//Present films reiterate, talent can not only persevere, but thrive under less than ideal conditions.