Web Only | DVD: A Glance at North Korean Cinema 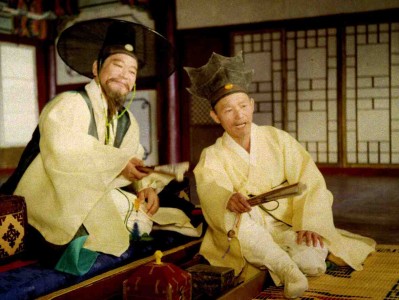 “Depicting the typical man of the new era means creating images of people who live, work and struggle with the conviction that they are masters of the revolution and the work of socialist construction…Stressing this principle of Chajusong and creating human images based on the concept of Juche allows literature to make an effective contribution to the education of people as true communists and to changes in every sector of the economy and culture, ideology and morality, in accordance with the concept of Juche.”

—Kim Jong-il, On the Art of the Cinema

Certain stereotypes persist about the nature of North Korean cinema, but it’s worth recalling that until the late 1980s, North and South Korea were two sides of the same coin: the former a Stalinist totalitarian state but the latter a right-wing military dictatorship. As late as 1975, according to an article in The Economist (Dec 29, 2010), the per capita income of the North still in fact exceeded the South’s. The same source more familiarly calls contemporary North Korea “the world’s most repulsive regime” in an May 8, 2008 article that detailed the devastation caused by the country’s recent famines. The Dear Leader of the hermit kingdom is unique among heads of state in penning a book-length treatise in film theory (first published April 1973, re-issued 1989, English version 2001), and anyone who has but glanced at passages should inevitably be led to expect that most of North Korean cinema will be ridiculous. Until recently, the only North Korean film widely available on video (outside of secret torrent sites) has been Shin Sang-ok’s monster movie Pulgasari (1985), and that’s not a work that encourages a nuanced vision of the country’s cinema.

Snippets of Kim Jong-il-supported cinema appeared in Jim Finn’s characteristically mad mock fantasy The Juche Idea (2008), but the French label Wild Side’s release of a four-film set, Regards sur le cinéma nord-coréen, seems to offer some antidote to this quandary. Finally we can see some complete North Korean films, in decent copies—albeit, only with French subtitles—and as a bonus all presented by someone who knows what he’s talking about. (Each film is introduced by Antoine Coppola, who teaches at Université de Provence and at Seoul’s Sunkynkwan University and is the author of Le cinéma asiatique, published in Paris by L’Harmattan). There’s a pretty good historical spread here too, taking us from the ‘70s through to the present day; altogether the collection includes Jang In-hak’s Journal d’une jeune nord-coréenne (2006), Jo Kyungsoon’s Le Calice (1987), Yoo Won-jun and Yoon Ryong-gu’s La légende de Chunhyang (1980), and Pak Hak and Choi Ik-kyu’s La fille aux fleurs (1972).

To actually watch these films is to have a strangely dualistic experience. At first blush, one’s Kim Jong-il-led assumptions about the kitsch of totalitarianism are very strongly reinforced. The ridiculousness of the project of North Korean cinema seems vivid in a way that went way beyond a sniggering response to Pulgasari. And then, with the next disc, a mystery was solved and deepened at the same time, making me long for more even as I sometimes thought that this was all really a bit too much.

Totalitarian kitsch first. Jang In-hak’s Journal d’une jeune nord-coréenne (2006) starts surprisingly well. Early in the film there is some very striking footage shot in low, brushy hills of a young woman watching a train pass by; it’s not exactly Pather Panchali (1955), but Jang shows that he’s got an eye for landscape, knows how to frame a fairly long take, and has some real empathy for the way that a restless young person sees the world around her. That makes the bulk of the film all the more unpleasant to watch. The titular young woman has various worries about her father’s ability to live life fully and thus make a real contribution to the state—and, by extension, her own life. The narrative is punctuated by socialist-realist pop-musical numbers that seem to be taken directly out of a Finn piece. Overall, it’s the sort of film that encourages snickering, and upon further reflection just encourages sadness. There’s quite a lot in Journal d’une jeune nord-coréenne to indicate that Jang is not a bad filmmaker, but it’s a very bad film.

The experience of watching Yu Won-jun and Yun Ryong-guy’s La légende de Chunhyang, made two decades earlier in 1980, is completely different. The importance of the Chunhyang narrative in Korean cinema cannot be understated. It’s a very old folktale about a young woman (Chunhyang) who remains faithful to her fiancée (an aspiring magistrate named Mong-ryong), even though, as the daughter of a courtesan, she is ordered by a cruel local governor to marry another. In the 19th century it migrated into the Pansori song tradition, and remains one of the few surviving exemplars of that form. Altogether it’s been made into a film around 30 times, first in pre-partition Korea (there is a 1923 silent version, and a 1935 version that was Korea’s first sound film) and later on both sides of the DMZ.

I had long been curious about this “Northern Chunhyang” because I am a great admirer of both Im Kwon-taek’s 2000 version and of Shin Sang-ok’s 1961 version, both made in the South. The idea of a Northern version spaced exactly in-between these two great films always seemed too perfect. And I can now confirm: perfect it is. Yu and Yun’s “Northern Chunhyang” predictably emphasises the class-struggle aspects of the story. It features a slightly silly scene where Mong-ryong tells his right-hand man how he wishes that Chunhyang was noble and his man replies that it would be great if there was no nobility. But class is a very real part of the narrative, and so while that scene feels a bit forced, it’s consistent with the rest of the piece. Moreover, Yu and Yun’s Northern version clarifies the importance of the scenes set in the evil governor’s fortress. In Shin’s version this material is breathtaking, shot at crazy low angles in incredibly vivid colour widescreen. In this Northern version the camera is always looking down at Chunhyang, but the compositions are no less complex, dynamic, and kinetic.

The Northern Chunhyang finally crystallised some of my tentative thoughts on the genealogy of these film versions. Shin’s 1961 version is, essentially, the nationalist Chunhyang, with its glorification of the Korean landscape and its sentimental appeal to epic narrative. Yu and Yun tried their best to make an insurgent Chunhyang, with a focus on very real political elements of a narrative that centres, in even its most primal forms, on the suffering of a young underclass woman at the hands of feudal overlords and the radicalization of her middle-class-functionary lover. And Im made, in essence, a folk Chunhyang, with the actual narrative cross-cut with a modern-day stage performance of the Pansori song, to tremendously visceral effect.

So progress made on one film-historical problem, but the solution to a related puzzle remains even more tantalisingly out of reach. Shin Sang-ok, of course, was famously kidnapped by North Korean agents in 1978, only to re-defect during a 1986 trip to Vienna. One of the last films that he made north of the partition, according to Hyangjin Lee’s 2000 book Contemporary Korean Cinema, was Love, Love, My Love (1985), a musical version of Chunhyang. Lee seems to have seen it, although I find his discussion a little turgid; I’d love nothing more than for my naïve, Kim Jong-il-led sense of North Korea’s cinema to be problematized even more than it was by La légende de Chunhyang. I admit that my “nationalist/insurgent/folk” explanation of Chunhyang’s cinematic evolution is a little too tidy, an amateur’s reading: Chunhyang, Shin Sang-ok, and North Korean cinema in general remains topics for further viewing.

Posted in CS46, Web Only