Web Only | You’re Next (Adam Wingard, US) 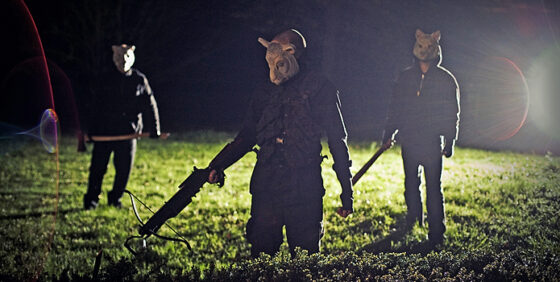 The question of whether the horror genre is dead has become as predictable as the very cinematic ouroboroi—such as Saws and Paranormal Activities, constantly finding new ways to die within the same immovable structure—that tend to inspire such sweeping generalizations. It’s also necrophiliac in nature: if horror is dead, why do people keep lining up to hump the corpse? With this in mind it might be better to inquire how the genre is being reanimated, for alongside the so-called “torture-porn” movement there has been a consistent, if not small, subgenre developing: call it mumblecore horror.

Mumblecore, another ill-defined sub-genre, has become synonymous with not only “low-budget” but with navel-gazing, character-driven films about white, bourgeois twenty- to thirty-somethings musing over the meaning of their lives, and maybe featuring a prolonged dance sequence: cf. Dance Party USA (2006), Hannah Takes the Stairs (2007), or the counterintuitive “mainstream” mumblecore entry Greenberg (2010). Despite the seemingly incongruous connection between soft-spoken slackers and hardcore violence and gore, the genres have nonetheless become increasingly tangled—a genre Rat King if you will—their curiously shared similarities creating something new and, quite happily, monstrous. Mumblecore stalwart Joe Swanberg (of the aforementioned Hannah as well as LOL [2008]) also stars in Adam Wingard’s A Horrible Way to Die (2010), a grungy addiction-recovery tale featuring a psychotic serial killer searching for a girl trying to work though the 12 steps; his muse Greta Gerwig did the scream-queen thing in Baghead (2008) and had her face shot off in the awesome The House of the Devil (2009). In a recent interview, that film’s director Ti West points out that “most of these [mumblecore] filmmakers and horror filmmakers are very like-minded, which makes collaboration easy and worthwhile.”

Which brings us to You’re Next, Wingard’s follow-up to A Horrible Way to Die, which again engages with these American indie roots but in a defter and more clever way. Unlike the slow burn of Horrible, which embraced a handheld aesthetic, ragged lighting cues, and a portentous sense of impending violence (finally rushing to this in a frantic scene of torture in the last ten minutes), You’re Next instantly establishes its ruthlessly tight pacing in its opening sex n’ death scene, which also strikes the sustained balance between winking genre parody and genuine scares. Toying with the conventions of its de rigueur set-up—He is too old (and played, inequitably and inevitably, by Larry Fessenden), She (Kate Lyn Sheil) is too disengaged, and their brutally interrupted post-coital interlude is scored to the sweet and incongruous sounds of the Dwight Tilley Band—this initial sequence acknowledges its stereotypical predictability without dulling the impact of the gory money shot that caps it off, and takes us right into an ‘80s-inspired credit sequence complete with titles written out in corn-syrup blood splatter.

After handily establishing his horror-movie chops, Wingard moves in on the mumblecore tropes as the members of an upper-class family and their respective partners gather at the country mansion for the parents’ wedding anniversary. While this motley bourgie bunch—including Crispin (A.J. Bowen), a physically and emotionally soft academic and Erin (Sharni Vinson), his deceptively capable girlfriend; peacemaker brother Felix (Nicholas Tucci) and his morose, sardonic partner Zee (Wendy Glenn); unbearable favourite son Drake (Swanberg, back for another round), and Ti West as one of the daughters’ new boyfriends, an indie filmmaker (as he plays in Swanberg’s Silver Bullets)—echo the familiar types that make up the navel-gazing mumblecore universe, those navels soon get punctured with various sharp implements as a group of heavily armed intruders in animal masks go all Straw Dogs on the combative clan. Yet while screwdrivers, machetes, arrows, and numerous other items from the exotic to the mundane come in for inventively gruesome use, You’re Next is not merely a gore show; for one, Wingard’s uncannily precise use of sound, from the obvious (the ironic, and chilling, repeated use of the Dwight Tilley Band’s “Looking for the Magic” on the soundtrack) to the subtle (setting the sound levels slightly off to collapse spaces between characters, while amplifying the weathered house’s accidental groans), attests to a high level of craft that both amplifies and cheekily comments on the film’s many and manifest absurdities. In the finale, as the embattled group’s sole survivor aims to fend off the last of the masked murderers by rigging up a ludicrous Rube Goldbergian device—akin to something out of Home Alone (1990), though considerably more lethal—the score’s switch from its previous low throb to a pulsing kinetic beat is so utterly out of joint from the rest of film that it both highlights the silliness of the scenario without disrupting the mounting tension that the film has built towards.

It also consolidates the film’s forays into dark comedy, purposefully exposing horror genre conventions and reflexively mocking itself (not to mention indie filmmakers). The authentic horror of the early passages earns Wingard the right to get deconstructive, and it helps that Simon Barrett’s script is actually funny: lines like “Fuck me next to your dead mother” and “I grew up on a survivalist compound” may be you-had-to-be-there propositions, but the cast sells them in the moment. There are still more layers, too: beneath this humour there lingers a palpable cynicism—towards family, relationships and even academia—that never allows You’re Next to descend into deliberate exaggerations for comic effect, just as the humorous flourishes don’t distract from its status as a lean, mean jolt machine.  Instead, the film creates both a fresh text from old conventions and fresh kills with innocuous objects. Both of these are admirable enough achievements to make us look forward to whatever Wingard does next.