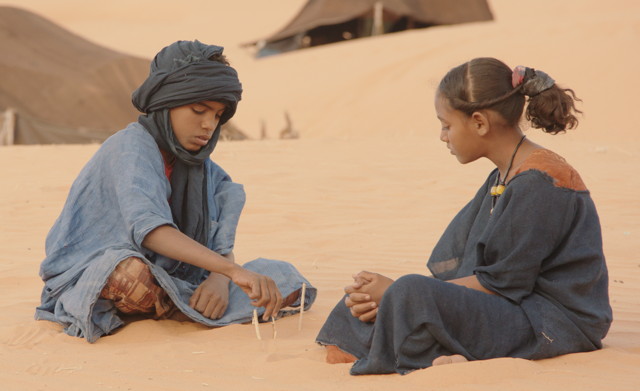 Early in Abderrahmane Sissako’s Timbuktu, an army of young Islamic rebels marches into a mosque, automatic rifles slung at their sides. It might look like the start of a proper siege if we hadn’t just seen the same men ineptly chasing a gazelle through the desert in a jeep (calling to mind the garish kangaroo hunt from Ted Kotcheff’s Wake in Fright [1971]) then firing on a series of West African idols in a heavy-handed act of iconoclasm. The camera roams through the halls as aimlessly as the occupiers, until it halts as one of the men comes across the resident imam (Adel Mahmoud Cherif) and finds himself scolded like a child for his misconduct. “You can’t walk around in the house of God with guns and shoes,” protests the imam, to which the young man—apparently a bit wounded by the accusation—answers that of course they can: “We’re doing jihad.”

Sissako has rightly been praised for his ability to bring out the basic humanity on both sides of such diametrically opposed factions, but what impresses most in Timbuktu is his ability to express that humanity in such a subtle, formally restrained manner, calmly observing the way characters bring their respective energies and convictions to every interpersonal encounter. Timbuktu might have been a righteous but reductive screed about the way religious fundamentalism insinuates itself into every aspect of a community’s quotidian life, rotting it out from the inside; instead, it is a tonally complex social comedy about the fraught neighbourly relations that spring up in such disputed spaces.

Though essentially an ensemble piece, Timbuktu focuses on the plight of Kidane (Ibrahim Ahmed dit Pino), a cattle herder whose life in the dunes adjacent to Timbuktu with his wife Satima (Toulou Kiki) and daughter Toya (Layla Walet Mohamed) has so far remained more or less untouched by the jihadists who stormed the city in 2012. That changes when he is drawn into a violent dispute over his errant cow (named GPS), which wanders into a local fisherman’s nets one too many times and is finally killed by the highly irritated neighbour. The rarely ill-tempered Kidane charges into a fight with the fisherman and his gun goes off in the tussle, which lands him in the city’s rudimentary court and subjects him to the newly instated Sharia law. Blissfully neutral up until now, Kidane now finds himself forced to either furnish his victim’s family with an impossible payment of blood money or its equivalent in 40 cows—equally impossible, as his stocks have been depleted to six—or face death by stoning.

It’s plain from the moment the cow begins to stray how Timbuktu will end up: as a story about a rural oasis whose residents will eventually be drawn in by the inescapable centripetal pull of the conquered and corrupted city, no matter the proclaimed neutrality of those like Kidane, who early on protests that there’s no use either fleeing from the new regime or taking up arms against it. (Though he’s not much of a talker, we learn most of what we need to know about our quiet hero from his young shepherd Issai, who reminds Toya that if her father were a warrior he’d have been killed well before this dispute over the cow.) But Sissako finds real tension as well as wry humour in the disjunction between the ancient roots of the jihadists’ legal system and its makeshift, comically inept enforcement in the present, as the bureaucrats of the new regime—nearly all of them strangers to the region they are supposed to administrate—attempt to impose regulations that they themselves can barely interpret in any instrumental fashion on a people who have a far greater claim to and understanding of the land and its customs than do they. The most evocative of such moments finds a judicial functionary hunched over a desk in clerical pose, handing Kidane’s charge down to him through the aid of a local jihadist who speaks broken Arabic, translating the basic sense but not the full meaning of the impending trial to the accused in a high-stakes game of broken telephone. Another bleakly funny set piece sees a soldier listening in on some local musicians, wondering what exactly would constitute a legal breach that he might police. (“They’re singing praise to the Lord and his Prophet,” he tells his superior. “Shall I arrest them?”)

Sissako’s treatment of Kidane’s legal quagmire, as well as the community’s uneasy relationship with the rebels who share their religious beliefs in spirit if not in intensity, has been compared to Samuel Beckett. There is admittedly something reminiscent of Vladimir and Estragon in Sissako’s portrait of life on earth—for both occupied and occupier—as a vast expanse of unfulfilled time spent idly kicking sand, sneaking smokes despite the ban on tobacco, and (for women) either obeying or ignoring arbitrary loudspeaker commands about the importance of wearing socks and gloves. Far from positing a sort of universal community of existential malaise running from the West to militant-occupied Mali, however, Sissako is seeking specificity. Attuned to the peculiar strain of absurdism bred by this particular situation in this particular space, he crafts not simply a broad satire of religious extremism (whose extremes are only compounded by the equally blinkered dictates of bureaucracy), but an astute, highly situated study of how one navigates a contested territory.

While this regionalist specificity and resistance to essentialist generalizations about the incompatibility of strict moral governance with the stuff of everyday life is admirable, there are nevertheless moments in Timbuktu that feel conspicuously torqued for Western appeal: a conversation between militants about the relative value of Zidane versus Messi, for instance, or a breathlessly cut sequence that follows a children’s soccer game played without an actual ball (sports being banned under the new regime), which the rebels can only impotently stand by and watch. Equally suspect are the segments featuring Zabou (Kettly Noël), an eccentric who roams through the streets in brightly-coloured robes (loudspeaker orders be damned) with a rooster at her side, who is seemingly on hand because stories of communities in crisis can always use a holy fool as a speaker of truths and audience surrogate.

A generous, uncynical reading would take these sequences as evidence of the varieties of cultural life that have to go underground during times of extremist rule, rather than as calculated efforts to promote the sort of cross-cultural humanism that wins Césars, and gets nominated for Oscars. If such moments rankle, however, it’s only because the fabric Sissako has woven is so remarkably tensile. While there is a certain inevitability to the return of that gazelle in the film’s closing moments, as well as to the narrative resolution of Kidane’s trial—his interpolation into a global context beyond his humble life in the dunes determined from the very start by the incongruous name of his animal—this structural neatness is not simply an interpretive shortcut, but a token of Sissako’s adroitness at pivoting between individual dramas and the overarching social and political systems to which they are so inextricably bound.