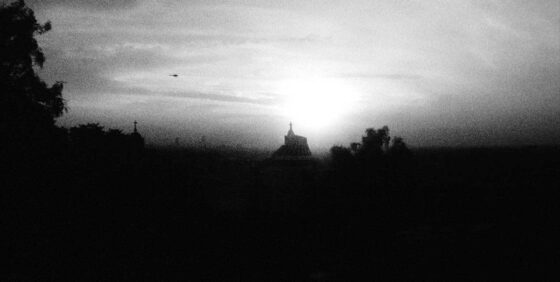 The term “documentary,” with all of its multifarious associations and attenuated definitions, has become an increasingly ineffective designation in recent years. While generic classifications of and distinctions within the category have long proven problematic (if not arbitrary), the recent documentary turn in the art world, combined with contemporary cinema’s increased cross-pollination of nonfiction with elements of fiction and abstraction, have made matters still more confusing. But even though, like KFC and AARP, FIDMarseille has quietly disavowed part of its acronym—an arguably necessary step, considering that the 2015 edition featured some works that would have to be deemed fictional by even the most lax taxonomic standards—the “D” that once denoted “documentary” remains ever present, if largely unremarked upon. If anything, the recalcitrance of the term suggests that it might still be useful after all—to at least denote a sensibility, if not necessarily an instantly recognizable set of aesthetic choices.

FID’s usual lineup of films ranges vastly, not just in “content” but in aesthetic strategies and running times as well, including a fair number of medium-length works that wouldn’t seem to sit comfortably in any other context. Blissfully banished from the festival is the kind of just-barely-feature-length, talking-heads issue doc that plagues North American documentary festivals, and in its stead is a certain species of hybrid work that seems perpetually in search of newer, stranger forms. This emphasis is risky by definition, and because of the festival’s insistence on showing premieres over films that have already traveled the festival circuit, there can be downsides. For whatever reason, this year’s lineup suffered from a dearth of female filmmakers, despite screening some 130 films and putting over three dozen in competition. But this is an anomaly for a festival that champions a wide variety of artists working in diverse modes, formats, and national contexts.

Nonetheless, FID’s function in the festival ecology as trailblazer, or possibly harbinger—its competition films are world or international premieres only, hence not yet chewed over and tweeted about by festival-hoppers—seems to benefit veteran and neophyte filmmakers alike. Thus there were out-of-the-blue surprises like Mariana Caló and Francisco Queimadela’s The Mesh and the Circle, an essayistic accumulation of precisely rendered images of artisanal labour and geometric abstraction; and hotly anticipated items such as Philippe Grandrieux’s latest film, Meurtrière. Apparently the second frame in a proposed triptych with Grandrieux’s last film, White Epilepsy (2012), the new work is a somewhat unnecessary and too literal revisiting of the same glacial pornotopia of its predecessor—a cavalcade of writhing, grunting, grinding naked female bodies that are a bit too finely toned for the sort of body horror Grandrieux seems to be going for.

Jerónimo Rodríguez’s debut feature The Monument Hunter explores intimacies of another kind altogether. Through subtle oscillations between Brooklyn and Santiago, the film’s narrator and first-person camera elegantly unravel the personal and the political, memory and history: of Chilean soccer, of the Unidad Popular, of the many near-anonymous statues and memorials that populate urban landscapes. Along the way, observational images of contemporary landscapes—inscribed with the past yet constantly changing, gentrifying, or being erased—merge with borrowed ones from films by Joaquim Jordà, Hong Sangsoo, Raúl Ruiz, and Harry Smith, and a few internet videos. This experience of searching (in both physical and virtual spaces) gives the film an air of laconic mystery, evincing a certain cool melancholy for the smoothing out of geography, temporality, and experience.

Riccardo Giacconi’s medium-length film Entangled—a refreshingly weird choice for the International Competition’s Grand Prix winner—follows a search of a cosmic and wayward nature. What begins as a loose compendium of fragmentary images centred on the city of Calí, Colombia—archival images of flooded streets and submerged trolley cars; a lion lazing around as flies swarm on its nose; a tiny bloodstain on the back of a man’s shirt; a dead cockroach besieged by ants—soon emerges as an intricate, polymorphous assemblage of stories: a puppeteer’s crazed ramblings about drugs and madness; musings on creation and perfection from a Freudian tailor; a psychic healer’s story of a UFO sighting; a physicist calmly explaining John Bell’s notion of quantum entanglement, in which two particles, however distant from each other, share information. In Giacconi’s hands, the film itself becomes an entangling machine, colliding stray images with skittering insect sounds and theremin music alongside textual citations from Samuel Beckett and Andrés Caicedo, and threading narratives with documentary observations and strange hallucinations.

A similar confrontation between the observational and the psychedelic occurs in Nelson De Los Santos Arias’ Santa Teresa and Other Stories, a (very) loose adaptation of parts of Roberto Bolaño’s epic novel 2666 which the filmmaker interweaves with the stories of friends and collaborators. Again, the title is a hint: Santa Teresa and Other Stories is something of a grab-bag, shot on a variety of film and video formats, and—with its cacophony of narrative voices, types and textures of images—a bit overloaded. But with this ambition comes an unmistakable talent, even grace, as De Los Santos Arias amasses a rich audiovisual portrait of Mexico through fragments of stories, patches of sound and music, and still and moving images.

Following in the footsteps of Bolaño’s detective protagonist Juan de Dios Martínez, the film functions as a compendium of dreams and visions of the fictional locale of Santa Teresa, a stand-in for 2666’s Ciudad Juárez, a city dominated by both religion and extreme violence. Among the many stops along De Los Santos Arias’s route: a portrait of the traditional Zapotec figure of the muxe, a cisgender man who lives as a woman; a performance in the form of witness testimony by the filmmaker and activist Judit Gómez; and photographs taken from Chihuahua’s archive of unidentified murder victims, evidence of the femicides which make up the unremitting fourth chapter of Bolaño’s novel. The structure of the film is difficult to discern, but throughout there is a constant tension between beauty and encroaching violence as it begins to incorporate increasingly violent stories on the one hand, and on the other images of a raw and vividly present natural world: animals, cacti, dry topography. Santa Teresa and Other Stories seems to use these narratives, images, and dreams as a way of exorcizing the present, to wind it back to a more primitive and innocent state as if curing it of an illness.

The festival’s standout film by some measure, Hassen Ferhani’s Fi rassi rond-point (roughly translated, A Roundabout in My Head) is in many ways a more traditionally structured observational documentary, but this in no way holds the film back from developing a complex set of themes. A portrait of the insular demimonde of an Algerian slaughterhouse, the film plays with expectations that it will be a variation on Franju’s Le Sang des bêtes (1949) with its first image of a young man, dangling a cigarette from his lips and wearing a soccer jersey that’s stained copper-brown with dried blood, operating the whining crank that hauls the exsanguinating bovines aloft. But the film soon evolves into a portrait of masculinity and its frustrations, focusing on two young men: an Arab with a faux-hawk who occasionally pauses in his work to do some push-ups, and a zaftig Berber who eggs him on. The two sit around on their breaks, chew gum, smoke, talk about love, and listen to love songs emanating from the tiny speaker of a cell phone.

The friendship between this unlikely, Laurel-and-Hardyesque duo gives us some sense of the dynamic between Arabs and Kabyles, both within the slaughterhouse and in Algeria at large. Both men share the frustration of economic stagnation and lack of opportunity, but the Kabyle, facing unequal wages and responsibilities in comparison to his Arab colleagues, is alternately the more defiant and the more resigned. But the other denizens of the abattoir don’t suggest that many better options await him: there’s a drunk who has quit his job but lurks just outside the building all the same, and an old man who began working there in 1945 and now cleans the toilets. “In my head, a roundabout…many paths,” muses the young Arab man. But later, he notes that these paths really amount to three options: drugs, migration, or suicide (and he doesn’t fancy himself a drug addict).

Throughout, Ferhani demonstrates a keen eye for character and detail, which he reveals through precisely rendered, occasionally surreal sequences of crushing banality and apathy: a captured bird that one of the workers found as a stowaway on a ship coming from England; a man intently reading a newspaper in a golden shaft of light as a cow loudly bleeds to death at the other end of the frame. Later, in a near-perfect sequence shot, Ferhani captures the almost Tati-esque spectacle of an obstinate bull being slowly coaxed across the frame as the rest of the men try to watch soccer on TV. Soon, it’s all hands on the bull as spectators drag the animal to its death in a comic push-and-pull that culminates in a lusty cheer: Goal! “Today and yesterday,” blares the sportscaster, “the country has strong men.” It’s a moment of painfully fleeting joy for those in front of the camera, and of keenly felt irony for the spectator, and the film’s mediation between these two states attests to something still useful within the documentary form: its capacity for reflection, translation, even metamorphosis.