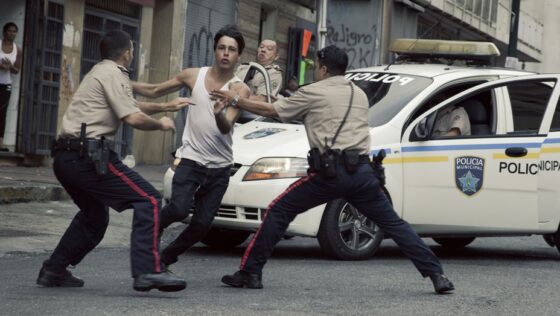 There are three films to be found in From Afar, an altogether astute, pompous, and false work that won the Golden Lion this year in Venice thanks to jury president Alfonso Cuarón and his band of collaborators. The first one is a story of seduction between mechanics: Armando (Alfredo Castro), a lonely and disturbed middle-aged dental technician, falls in love with the much younger Elder (Luis Silva), a part-time car mechanic and part-time juvenile delinquent. In the beginning, the boy rejects the man, beats him, and steals from him. Then, Elder falls ill and Armando takes care of him. They establish a sort of father-son relationship, until the boy falls for the man. The man rejects the boy sexually, until they finally make love. It’s a small story with a modestly happy ending, shot with the camera leaving almost everything out of focus except the boy’s body, the plot proclaiming the power of homosexual passion.

But this first film, rather sound and simple, is concealed in a second one that’s much more complicated, and, in the end, much weaker. In order to bring some volume to the proceedings, first-time director and scriptwriter Lorenzo Vigas asks for help from Fernando Vallejo’s novel Our Lady of the Assassins (which was previously filmed in 2000 by Barbet Schroeder). The lovers are actually more than that just lovers: they are the excuse for staging a personal tragedy, which ends with Elder being arrested after killing Armando’s father. While in From Afar’s first film the absence of dialogue and long silences between the two protagonists serve a purpose, in the second they fail to help explain a set of rather arbitrary plot decisions that lead to that ominous ending. While the first film is rather physical, the second one is psychological; while in the first the élan for characters is desire, in the second it’s guilt and memory.

But guilt and memory don’t reveal themselves easily onscreen—they need to be communicated through acting. We need to believe that Elder kills Armando’s father because he also hates his own father, who used to beat him when he was a child (or something of the sort). Unfortunately, the acting is one of the low points in From Afar. While Silva is simply not a skilled performer, the usually praised Castro is in the business of overacting; he’s the kind of actor who is usually framed in close-ups to show his complex feelings and profound suffering. (Glimpses of Dirk Bogarde in Death in Venice may be seen in Castro’s performance, but Bogarde didn’t make his eyes move slightly.) Accordingly, Vigas captures innumerable shots of Castro’s face to underline over and over again the ravages of Armando’s twisted soul.

To keep things moving in this film that has by now become a bad theatre piece, Vigas adds more characters, every one of them superfluous: Armando’s sister and her newborn baby, Elder’s mother and siblings, Elder’s girlfriend and his boss, Armando’s boss, Elder’s pals…you name it. The expanded scope of the film’s milieu facilitates scenes like a dance where Elder’s little brother discovers him kissing Armando in the men’s room, so that it can be followed by a scene in which Elder’s mother repudiates him. None of this makes much sense, but each scene doggedly works to ratchet up the levels of disturbance and anxiety, so that the environment becomes so oppressive that the ending comes as a relief; it’s the perfect set-up for the last close-up on Castro’s face as Armando watches Elder being arrested by the police, a shot that (maybe) shows how guilty he feels. But why Armando informs on Elder—as Elder is sure to eventually implicate him as an accomplice—remains a huge mystery. My guess (and I truly don’t have a better one) is that Vigas wants to pay homage to À bout de souffle (1960), and tell the same story from the point of view of Jean Seberg.

And then there is the third film—but this is a film that’s missing. In Our Lady of the Assassins, the love story and the violence were entangled with another element: the social context of Medellín, at the time run by drug lords, where death in the streets was a daily experience. In From Afar there is absolutely no context. Vigas’ film takes place in present-day Caracas, but the viewer comes to know that only because it’s mentioned 25 minutes in; the city could be, for example, the rather peaceful Montevideo, and not the capital of Venezuela, a city of widespread poverty where people fight in the supermarket for a piece of meat or queue hours for a roll of toilet paper, where the opposition leaders are in prison, the police chase students, the crime rate is extremely high, and the military are almost fully in charge not only of the government, but the drug dealing as well.

Officially funded by government grants, From Afar is evidently based on the premise that it shouldn’t show anything that is remotely close to the reality in the country, which is described by The New Yorker’s Jon Lee Anderson (somebody who cannot definitively be labelled as right-wing) as the most devastated he has seen outside of a war zone. In From Afar there is no hunger, no street violence, no drugs, and no political battles; even as he keeps widening the frame around his two lovers, Vigas n’a rien vu a Caracas. The procedure that the director and regular Pablo Larraín cinematographer Sergio Armstrong use to blur the margins of the widescreen frame (in the first scene, Armando approaches a teenager at a bus stop, but the crowd in the street remains almost invisible) provides a perfect metaphor for a film that so assiduously strives to shut out the world.