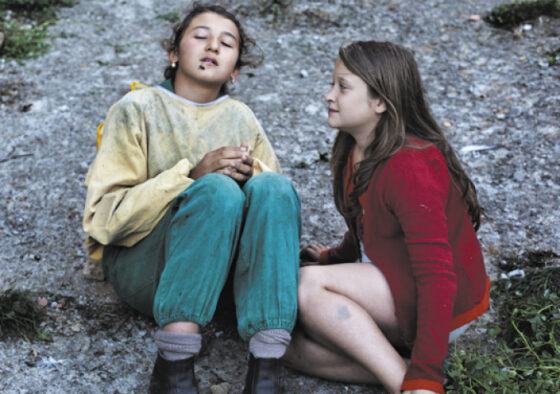 For those “in the know,” the Grand Jury Prize accorded to Alice Rohrwacher’s second film was the one surprise on a night where Jane Campion’s jury otherwise played things safe and sure, dispensing awards with dutiful nods to all sides. (Libération described it as the one prize with the flavour of a personal choice.)

Of course there were some who speculated that it was a politically correct sop, the natural extension of Campion’s introductory complaints about institutionalized sexism in the industry and the paucity of female directors among the ranks of Cannes’ Palmares. Alice Rohrwacher and Naomi Kawase were outnumbered 16-2 in this year’s lineup, and while The Homesman and Timbuktu were not the only films in the Official Selection with feminist themes, the women in these movies had a gruelling time of it: hysteria, rape, suicide, murder, not to mention the grunting favours of Timothy Spall’s J.W. Turner.

The Wonders eschews such melodrama. Outwardly modest, even self-effacing, it’s a coming-of-age film, like Rohrwacher’s debut Corpo celeste (2011). As the title hints, there is an element of fairy tale here, enchantment and dream, even carnival, but it’s rooted in grubby naturalism and authenticity, the soil and toil of a rundown farm in Umbria in the late ’80s or early ’90s. Before Corpo celeste, Rohrwacher worked in documentary, and DP Hélène Louvart (who has worked with Sandrine Veysette, Jacques Doillon, Christophe Honoré, and Agnès Varda) mostly shoots in the handheld, organic style popularized by those other former documentarians the Dardennes. Shooting on film, she vividly conjures the textures and colours of an adolescent summer without self-consciousness, fanfare or fuss. Not for nothing does an early sequence observe the mayhem when a younger sibling awkwardly wakes up the entire household with her insistence on getting up to poop in a home she’s still unsure about—as Godard points out in his Jury Prize winner Adieu au langage, taking a shit may be the last word in equality, the messy stuff of life.

In some ways The Wonders feels even more like a first film than Corpo celeste. “Personal, not autobiographical,” was the filmmaker’s disclaimer, though, yes, her sister Alba plays the mother here, and yes, the Tuscan-born Rohrwacher had a German father and an Italian mother, and yes, she was a beekeeper in a previous life—just like Gelsomina (Maria Alexandra Lungu), the watchful, conscientious 12-year-old who aids her father in minding the hives and draining off the honey as they attempt to carve out a new, self-sufficient existence safe from what he believes is the impending Collapse. (The process of beekeeping is observed closely enough that you might be tempted to use the film as a training tool, and Lord knows you’ll remember to change the bucket!)

It’s a fraught project. Gelsomina and her three younger sisters constitute a cost-effective (if unreliable) labour force, Dad is the demanding, determined farmer, while his wife and her sister (speaking Italian between themselves and sometimes French to him) seem more keenly aware of what’s lacking—money, naturally; creature comforts; and the kind of investment that will bring the farm up to Brussels’ health and safety codes.

Rohrwacher deftly sketches the stress points within the family, but the film’s real focus is the bond between eldest daughter and father. At the beginning of the summer Gelso is appreciative of her role as Wolfgang’s most trusted helper (as well as default child-minder), even if she’s also dimly apprehensive of her dad’s short fuse, his coercive methods, and obsessive personality. He’s the patriarch, but also an outsider in a house overflowing with women and girls (literally: he sleeps on a mattress out under the stars). Over the course of a couple of months, the film traces how the balance shifts from admiration towards a more nuanced understanding of Wolfgang’s shortcomings, a trajectory from daddy’s girl towards the first stirrings of Gelsomina’s emancipation and womanhood.

Two incursions from the outside world serve as catalysts. The first comes in the form of a TV show, a weirdly kitsch “celebration” of tradition, local produce, and rural colour disconcertingly incarnated by presenter Milly (Monica Bellucci) and no doubt broadcast on one of Berlusconi’s channels. Introduced as a vision of the feminine divine—a river goddess, perhaps, or a muse, modelling improbably swank Etruscan gowns and headwear when the girls discover her shooting an exotic scene-setting piece upstream from the beach where they have been playing—she’s the most glamorous being Gelso has ever seen, the film’s first eye-opening Wonder, and as she immediately intuits, a tacit threat to the Father’s isolationist idyll. (Bellucci is indeed marvellous in this faintly absurd cameo role, imbuing her handful of scenes with a star’s grace and charisma.)

The second incursion is more conventional: a teenage boy, Martin, a German youth offender, whom the family agrees to billet as part of a rehabilitation program (in return for some extra income), and whose case worker’s vehement denunciation of Wolfgang’s paranoia will be an eye-opener for Gelsomina. If Martin is scarcely fleshed out enough to transcend the status of dramatic device, this subplot’s sketchiness could more generously be interpreted as restraint, never quite succumbing to the romance we expect. Certainly Rohrwacher’s knack for implication—show, not tell—is one of her defining strengths, so that when Gelso’s aunt clumsily attempts to contrive a first kiss between her niece and Martin, the moment expresses something about her own sentimentality and desire, as well as the seemingly broken relationship between the girl’s parents.

The movie’s singular showpiece sequence (not quite the climax) is the recording of Milly’s television show, with local farmers competing to prove their traditional bona fides with a mixture of party pieces, hand-on-heart pitches to camera, and product samplings, all in an ancient system of caves on a nearby Etruscan island. It’s a bizarre spectacle, part comedy, part tragedy, as Wolfgang definitively flunks his big chance to explain himself and put the world to rights even after Gelso has gifted him the perfect opportunity. The producers cut away as soon as they get a whiff of whatever craziness is eating him up, as well they might. But Rohrwacher doesn’t need to spell out the irony. A couple of decades on, Wolfgang’s concerns for a purer, environmentally sustainable life—a countryside that’s for agriculture, not just sightseeing—seem unerringly prescient. After all, it’s not just the bees facing colony collapse.

Grounded in direct experience but alive to the unexpected, to transformative moments of revelation and unchecked (if often unspoken) emotion, The Wonders signals the maturation of a significant cinematic talent, and kudos to Jane Campion and her jury for recognizing as much.

Posted in CS59, Festivals, From The Magazine, Spotlight