It’s the Earth Not the Moon (Gonçalo Tocha, Portugal)

Robert Koehler/CS48, From The Magazine, Spotlight 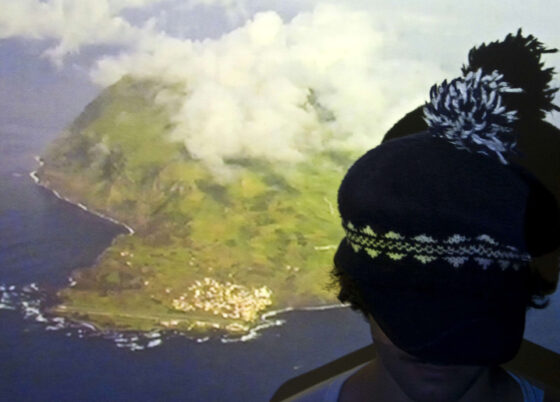 The lure of islands, their fundamental thereness, their separation from, and fragile connections to, the rest of civilization, their existence as an ideal metonym for individual identity but also for the world as a whole—all these, and more, make islands powerful places for filmmakers to land upon. When they do, they’re hopefully aware that they follow the wake left by Homer, Shakespeare, Defoe, Golding, and others drawn to the island—the “island mind,” as the English novelist John Fowles precisely termed it—as a place to unpack immense ideas about creation and being. Whatever Gonçalo Tocha’s reading may be, his physical connection to the sea, as first seen in his astonishing, out-of-nowhere diary documentary Balaou (2007), is intense, and the ocean odyssey of his debut logically leads to an oceanic landing on the remote Azores island of Corvo, Europe’s furthest western tip, in It’s the Earth Not the Moon. Already in the title is the inherent consciousness of island-as-world, but also the need of a reminder that, on this island (and maybe any island one lands upon), the voyager is still on this planet, even while the nature of the island is to promulgate the idea and feeling of being on a distinct satellite.

This might suggest that Tocha isn’t just surfing in the wake of Homer but also of Herzog, extending the German’s never-ending quest for the inexplicable, immeasurable, mystical, something beyond. Some of the first words heard on the soundtrack are from a man who says of Corvo: “In the Azores, it’s crazy, and there, it’s crazier.” But what’s found on the island isn’t crazy at all. Tocha, is, if anything, the anti-Herzog: embracing Corvo’s lure, for sure, but interested in its people more than even its powerful natural forces, which are almost too easy in any case for a filmmaker to capture. Probably 80-90% of the film’s three-hour running time, and likely the large majority of the filming (with Tocha on camera and collaborator Didio Pestana on sound and also, just as crucially, as half of a running voiceover conversation that forms the backbone of the film’s casually witty soundtrack), is spent in and around the tiny town at the island’s far southern tip. No mad visionaries or demented eccentrics drift into frame; instead, one of the central observations of the film is that, for all of the ways in which islands like Corvo can isolate and separate its inhabitants from the rest of society, it’s in fact society that has reached the island, gradually transforming it to bring it into line with the rest of the world—and its governing nation-state, Portugal—on the distant mainland.

The film’s fascination with the island’s human community is a surprise for admirers of Balaou, a film of extreme interiority that’s built up almost entirely of Tocha’s images and thoughts as he traces his late mother’s voyage to the Azores. The new film goes just as extreme in exteriority, establishing an opposite pole to Balaou, similarly concerned with existence, but now less solitary and built more around a collective consciousness. Just as important is that Tocha has Pestana (who composed the score for Balaou) to play off of, at first dryly arguing back and forth about basic facts from the island’s size (actually, 6 x 4 km) and population (actually, 440), as if the place can’t be truly known. Yet the project’s frankly absurd goal is to “film everything we can, we will try to be everywhere at the same time and not miss a thing…we will try to meet everyone, to film every face, every service, every house, every street, every workplace, every corner of the island, every tree, every rock, every bird…” Thus, a furtive satire of the anthropological documentary, the informational documentary, and the armchair adventure, but made at the same time with almost naïve sincerity.

Tocha creates a slightly fictitious thread—almost literally—by connecting the film’s structure of 14 chapters with the ongoing weaving of a knitted cap being made for him by local handcraft artisan Inês Inêz, appropriate for a film that becomes obsessed with work, whether it’s making handmade objects (Inês’ husband carves wooden bolt locks, inherently absurd for a town in which there are no robberies or crime), fishing, cattle-herding, pig-slaughtering (traditional and industrial), teaching music, shipping, maintaining municipal equipment, managing a karaoke bar. The cap, made in the exact mode of the island’s traditional whaler’s cap—inspired by similar caps worn by Scottish whalers whom Corvo fishermen met in the US and then brought back to the island—becomes a symbol of the place’s living heritage and also of a dying culture. (Tocha proudly wore the billed cap topped with a pom-pom everywhere he went in Locarno, where the film premiered in the Filmmakers of the Present competition; it won a Special Mention from the jury.) Inês comments that the younger women of Corvo no longer seem to have the patience for such exacting, time-consuming work, and that such knitting will die with her. The fiction inside this reality is that Inês appears to have worked on the cap the entire time that Tocha and Pestana spend on the island; she presents her complete work to him at the end of the film, when it actually took her only about ten days to do the work and the filmmakers revisited the island a few times during the course of nearly four years, from 2007 to 2011.

This myth is a gentle framework for a film constantly dancing between impressions and moments captured in the present. Tocha is attuned to surprise, and sniffs it out. He finds all sorts of unexpectedly urban-looking images, including: busy traffic zipping in and out of the active port, a growing landfill with trash blowing everywhere, factories, an airport, a light-pulsing and bass-pounding dance club, wide-angle shots of highway pavement, town streets and squares that could be in any Portuguese town or city, a gas station, a city planner unveiling blueprints and drawings for a multi-use performing-arts centre. Industrial culture’s invasion has already happened, on a place first seen as if it’s floating, uninhabited, in the middle of the Atlantic, closely resembling the shape of a small rock which one of the island’s older residents—a man who once kept a 40-year, day-by-day journal of island activities and the only thing close to a history of the place, and then burned it—places in front of Tocha’s digital camera.

When Tocha and Pestana venture beyond the town limits, they find a place that often resembles three other islands: Ireland, Iceland, and Maui. The valued pasture, blindingly green, is where cattle are grazed, land on which islanders once raised hordes of sheep (also documented by images, aging black-and-white photographs, a thin slice of the place’s spare library of documentation). The cattlemen talk of how they used to leave their herds to race down to the shore when whales were spotted from a still-existing whale-spotting perch resembling a Nazi bunker facing the Normandy coast. So even beyond the town, people dominate; only when Tocha and Pestana go even further into the heart of the island, formed by a large volcanic crater, do they find something beyond human touch, as close to wilderness as the place allows. Islands, if humans live on them, usually lose their wildness, but this pocket of Corvo seems to have escaped the human invasion. The crater is a giant green bowl, with a few small lakes formed at the bottom, a place that Tocha’s camera can only ponder humbly as it is sent into a kind of rapt silence by the near-unreality of the landscape. It’s not the moon, but a thought may seep into the viewer’s mind when watching this and other images in which island civilization gives way to nature: perhaps this is what we wish the moon, visibly glowing above Corvo, would look like.

Gonçalo Tocha, It's the Earth Not the Moon