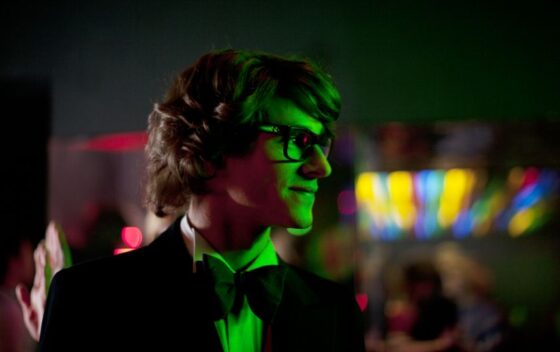 “Names, no doubt, are whimsical draughtsmen, giving us of people as well as of places sketches so unlike the reality that we often experience a kind of stupour when we have before our eyes in place of the imagined, the visible world (which, for that matter, is not the real world, our senses being little more endowed than our imagination with the art of portraiture—so little, indeed, that the final and approximately lifelike pictures which we manage to obtain of reality are at least as different from the visible world as that was from the imagined.)”—Marcel Proust, Within a Budding Grove

Conventional biopics are most often as inadequate as they are because their authors purport to be truth-seekers, carefully calibrating psychological motivations and assembling narratives around their subjects in order to recreate that which defies recreation. And the paradox of the entire genre is that, premised upon the magical aura conjured up by a famous name—“Yves Saint Laurent,” let’s say—it then tries to ground it in a “reality” that is as fabricated as the inspiring fantasy. So who, then, was Yves Saint Laurent? Only a filmmaker as supremely gifted as Bertrand Bonello could tackle that question and then answer it with a verdict that would please few: a mystery. “This is you, but a calmer you,” says one of the viewers to the legendary designer while looking at Andy Warhol’s four-panelled portrait of YSL in Bonello’s Saint Laurent. How many Saint Laurents are there? Let’s see: YSL #2 by Warhol; YSL #3 by Bonello; #4 is mine, forever ingrained in my imagination following the Cannes premiere of #3.

Spanning the years 1967 to 1977 (with a brief flash-forward to 1989), Saint Laurent immediately avoids one of the pitfalls of the biopic by forgoing the genre’s typical rise-and-fall template—if for no other reason than that Saint Laurent, who skipped the typical struggles and failures of one’s early years and found himself head of the House of Dior at age 21, took spectacularly little time to rise. Bonello does, of course, cover or at least note in passing most of the pivotal moments in his protagonist’s biography: YSL (Gaspard Ulliel) makes gowns for the stage production of Marguerite Duras’ L’amante anglaise and for Catherine Deneuve in both Alain Cavalier’s La chamade (1968) and François Truffaut’s La sirène du Mississippi (1969), corresponds with Andy Warhol, poses in the nude, scandalizes the public with his ’40s-themed “Libération” collection. Omitted are his employment at Dior, his fateful acquaintance with Dior co-founder (and later life partner) Pierre Bergé, and the 20 days he spent in the army during the Algerian War which resulted in a mental disorder, bouts of drug abuse, and shock therapy sessions. (You saw nothing in Algeria. Nothing.)

The laconic title of Bonello’s latest opus practically begs for the same appendix he affixed to his previous project, a concert film of actress-chanteuse and former Fassbinder spouse Ingrid Caven: Music and Voice. This is a film you could watch with your eyes closed, submerged in Ulliel’s soothing whisper, the carefully curated, decade-spanning soundtrack that captures the passage of time with a seismograph’s precision, and every extravagant walk down the runway, each one a veritable theatrical extravaganza where Bergé ritualistically issues his mantra to his underlings: the louder the music, the better.

A consummate hoarder—he owned one of the world’s largest private collections, including Art Deco furniture, several Mondrians and Rothkos, a 17th-century bestiary, countless murals and angel figurines, and a Buddha statue—Saint Laurent himself eventually ends up a collector’s item when Warhol’s portrait of him is hauled into the Louvre, eliciting his mumbled protestation: “I don’t want to go to a museum. I want to be alive.” In Only Lovers Left Alive (2013), Tilda Swinton taught us that to be alive means to dance, and Saint Laurent is, in essence, a dance film. As Saint Laurent’s model and muse Betty Catroux (Aymeline Valade) cavorts in a nightclub, the screen suddenly splits: on the left flashes a brief historical overview encompassing the turmoil of May ’68, de Gaulle’s resignation and death, and Jan Palach’s self-immolation in Prague’s Wenceslas Square; on the right unfolds a seasonal fashion show of Spring/Summer, Fall/Winter, and Spring/Summer again. (One is reminded of experimental filmmaker Toshio Matsumoto’s 1968 For the Damaged Right Eye, which projected three separate reels of abstract images onto a single split-screen: student rallies, the police cracking down on them, and people dancing to the Rolling Stones. And also, of course, of Warhol’s 1966 Chelsea Girls.) Blonde Betty dances through it all, just as in Bonello’s previous feature L’Apollonide—Souvenirs de la maison close (2011) the patrons of an upscale Parisian brothel staved off the inexorable advance of the 20th century by bolting the doors and dancing, in a melancholic trance, to ’60s psychedelic rock.

Just as Bonello’s anachronisms blithely cross disparate eras, so Saint Laurent gainsaid the passage of time. His collections resurrected bygone epochs, drawing heavily on the fashions of the ’20s, ’30s, and ’40s; when his beloved bulldog—named, à la russe, Moujik—passed away, he embarked on a meticulous search for a replacement, browsing dozens of puppies for one with the same spot on its paw. In his dreams, he even denies death: meeting Chanel by her house on Rue Cambon, he encounters his lover Jacques de Bascher (Louis Garrel), one of the early victims of AIDS. (De Bascher serves as a doppelgänger of sorts for the syphilis-ridden courtesan of L’Apollonide; the turnout at his funeral is pathetic.) Time marches inexorably on regardless, of course, and the icons duly take their place in the mausoleums and museums: in 1989, YSL—now played by none other than Helmut Berger—looks at himself in a mirror and sees himself reflected back as a mural painting of a saint. “I’m sick of looking at myself,” Saint Laurent claims, and his worries about being a has-been resonate poignantly in the aged actor (dubbed by Ulliel) who embodies him—a poignancy made all the sharper when YSL lies in bed, watching the gorgeous and youthful Berger in the French-dubbed version of Visconti’s The Damned (1969) on television.

Proust was Saint Laurent’s favourite writer, and the designer long dreamed of walking into the author’s sparsely furnished room, so much so that he manufactured an exact replica of it in his house. Now, bedridden and beset by memories, he is truly in Proust’s bedroom at last, thinking back on his childhood (lines from an adolescent poem, a lock of child’s hair kept by his mother) and recalling images from favourite movies, particularly Danielle Darrieux in Ophüls’ Madame de... (1953). (Movies do stay with us forevermore, and Darrieux doesn’t forsake those who have been dreaming about her for as long as they can remember––neither Saint Laurent nor his contemporary Paul Vecchiali, who fell in love with cinema once he saw her on screen at age six, and those whose lives were altered by Vecchiali’s Femmes Femmes [1974] cannot help but remember the French filmmaker at this moment.) At one point, YSL stands against a wall plastered with dozens of black-and-white photos of illustrious actresses as two unsuccessful actresses, Hélène and Sonia, languish beneath the graven images of these icons, a silent testimony to their own failure. One wonders what Saint Laurent thinks of as he exchanges glances with these portraits of his equals—he who triumphed in his youth, never knowing until much later in life how it feels to realize that you’re no great shakes, or to be unable to fulfill your destiny.

In Proustian fashion, each scene in Bonello’s film begets the next by the logic of association, and this same logic is perhaps the best fit when trying to describe the film itself. (Every movie, after all, requires a different language.) Saint Laurent underwent electroshock treatment, and shock therapy in French cinema is emblematized by Philippe Garrel––hence the fitting presence of his son Louis in Saint Laurent, an actor who direly needed to break free from typecasting. “I am tired, I am weary. I could sleep for a thousand years,” went a quote from a Velvet Underground song in the opening scene of L’Apollonide; little wonder that “Venus in Furs” pops up again on the Saint Laurent soundtrack. Saint Laurent is transfixed by Maria Callas, a fascination he shared with Werner Schroeter, who cast Ingrid Caven in his Day of the Idiots (1981) three decades prior to Bonello’s film of her. And how organic is the quoting in Bonello’s short movie of lines from Rose Poussière by Jean-Jacques Schuhl, Caven’s partner and author of the novel Ingrid Caven. Schuhl’s Rose Poussière, Schroeter’s Poussières d’amour (1996)—the word poussière contains dust and its taste, ashes, soil, and rocks that Saint Laurent remembers as he lies in an empty foundation pit indulging in recollections of a lost lover (a shot that appears at the very beginning of the film, echoing Saint Laurent’s memories of Algeria).

Names. Proust assiduously tracked the transformation of names: demimondaine Odette de Crécy becomes Madame Swann, and later entertains guests at her salon as the aristocratic Madame de Forcheville. Saint Laurent sheds his name: Yves Henri Donat Mathieu-Saint-Laurent becomes the simplified contraction Yves Saint Laurent, and later must fight to preserve his leading “Y,” as “YSL” is now not only a man but an international brand, an asset to be fought over. (The fight is encapsulated in an amazing eight-minute scene of a bilingual bargaining session.) Bonello re-enacts the legendary Helmut Newton shoot where Vibeke Knudsen sports Saint Laurent’s Le Smoking tuxedo suit; Is he still alive, she asks of Saint Laurent, or has he turned into a perfume, a three-letter acronym? Where are you, Yves Saint Laurent, not a fragrance but a 35mm vision of mine?

Novelist Hervé Guibert wrote that Saint Laurent “shows that a couturier can also be, must be, a geometer, a vehement individual whose capacity for love has not dried up, an illusionist, a child, an astronomer, a simple person and a genius, a Sunday or night author, a copier, a tamer, a smooth operator, a seer.” What else can he be? Saint Laurent, precisely, a saint flanked by his two loyal angels, his models Loulou de la Falaise (Léa Seydoux) and Betty Catroux (née Saint, so clearly intended for him from the beginning). Old and frail, surrounded by doctors in his hospital bed, God’s grace seems to descend upon him, evoking the dying cleric in both Bernanos’ and Bresson’s Journal d’un curé de campagne (1951), while his ever-present smile mimics the treasured golden Buddha he keeps in his alcove. “I often fall down, but I get up every single time,” Saint Laurent had said: 15 years previously, reeling in a drug-induced haze, he drops a bottle from his hand and falls on top of the shards; when he scrambles to his feet, his naked torso bloodied and torn, he is the image of Saint Sebastian. Just as the executioners piercing the saint’s flesh with arrows were wrong to believe him dead, so, in the film’s final chapter in 1977, journalists in the offices of Libération (Bonello himself among them) wrack their brains for an apt obituary for the fashion icon, whose death is supposedly imminent. Pierre Bergé invites them to the studio: “Prove you’re alive. Move your hand.” Saint Y, a frozen statue, does not budge––he just smiles and stares into our eyes from the screen.