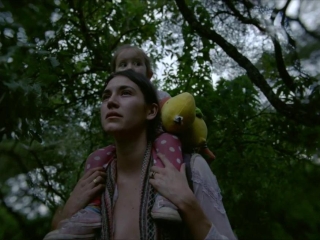 Hand it to Cannes: where else do art films get booed? On the rest of the planet, your typically well-adjusted art-house aficionado understands to appreciate whatever challenges the filmmaker has set…or the viewer walks out. To be sure, there are walkouts here too, but a good many hardier souls take it upon themselves to sit, suffering, through a movie they despise, for the privilege of giving voice to their displeasure…As if the Salle Debussy were a gladiatorial arena, in which the jeers of the crowd can push Caesar’s thumb north or south, and condemn the object of derision into well-deserved obscurity.

Not so fast! Vilification is often enough the first step to vindication; from L’Avventura (1960) to The Brown Bunny (2003) there’s a long, ignoble tradition of films that were repudiated by the Cannoises on first sight, only to be resurrected in the next breath. The most noisily derided films have a way of becoming the hottest tickets. Lars von Trier seems to have calibrated his career to just this phenomenon. And this year, Leos Carax and Carlos Reygadas battled it out for the distinction of the festival’s most contentious Competition offering. (That is, if we don’t count the five Americans, which we don’t.) Holy Motors came away from the festival with nothing but distribution deals, while—in the pressroom—Reygadas was booed all the way to his Best Director prize.

Why the hate? Is it a coincidence that these two very different films were also the most experimental Competition entries? They share some common surrealist strategies: disruption, disturbance, graphic sex, sexy graphics…In the most general terms, both filmmakers are casting about for new ways forward, breaking from conventional narrative structures and pushing their mise en scène into unexpected places. Are we still so resistant to the shock of the new? Or is the opposite the case, that we’ve become all too familiar with the provocations of the avant-garde? Like von Trier, Reygadas is seen in some quarters as a phony, a self-aggrandizer specializing in sexed-up Dreyer and Tarkovsky knock-offs; a purveyor of pervy transcendentalism.

These twinned films maudit are markedly different though. Carax is consciously playing with formal tropes—serving up parodic, postmodern variants on the likes of The Phantom of the Opera and the hit-man movie, riffing on Cocteau and Franju, and exploring acting and performance as metaphors for employment and human connectivity. In contrast, at least at first, Reygadas seems to be groping in the dark, going off-map as he seeks to exorcize his personal demons. Back in 2010 he announced his intention to make an expressionist film “where reason will intervene as little as possible.” For many first-time viewers it seems he succeeded all too well.

If Post Tenebras Lux (Latin for “After Darkness, Light”) presents itself as a problematic film, part of the challenge is simply to connect the dots, to figure out what we’re seeing and how it relates to what we’ve seen before. While Reygadas makes it difficult with his achronological, non-linear structure, and the occasional “stray” episodes that defy narrative exegesis (notably two scenes involving an English schoolboy rugby team, which reportedly derive from the director’s memories of public school abroad), the film does coalesce around one affluent, young nuclear family who have retreated to the edges of a remote, rural community, and, in particular, on the man, Juan (Adolfo Jimenez Castro), and his strained relationship with his wife, Nathalia (Nathalia Acevedo). The domestic family scenes are in a register of low-key naturalism, and without the blurry halo effect that fogs many of the external sequences, an ethereal visual ghosting that gives the outside world a hallucinogenic—or just plain demented—quality: through a glass, darkly.

If the counterpoint between these modes is disconcerting, that can hardly be unintentional. If Reygadas had chosen to present the movie as the drug-addled reverie of a seriously wounded, possibly dying man, audiences may have found it easier to process. But whatever else it’s about, Post Tenebras Lux is surely concerned with the difficulties attendant on reconciling the private and the public worlds, the shifting solipsisms of the lover, husband, father, and his place in a larger political, environmental, and spiritual framework.

Like several of the younger generation of Mexican directors Reygadas is creditably class- conscious, and in its less obscure passages the film limns the social disconnect between upper-middle-class Juan and the darker-skinned peasants in the wider community, some of whom work for him. Ironically, Juan attempts to bridge the gap by attending a local AA meeting, but listening to the stories of the others makes his own porn addiction seem trivial in comparison. One of the men at this meeting, a drug addict who goes by the name of Seven (Willebaldo Torres), describes in some detail the expensive renovation work he’s carried for Juan. The same man drunkenly calls out his employer at a New Year’s celebration—and will later shoot him in the chest when Juan catches him stealing from the house.

Do we also see the spectre of Seven reconfigured in the supernatural aura of the bogeyman, a CGI Satan, complete with horns, spiked tail, a pronounced cock, and carrying a toolbox, who twice breaks into the sleeping Juan’s home? It’s hard to say for sure (Reygadas has said the toolbox is a memory of his father), but certainly he assumes larger-than-life, tragic properties in the film’s most stunning and contentious shot, an image so brazen and audacious it’s unlikely that anyone who sees it will ever forget it.

If Seven remains a cipher, we’re unlikely to empathize more deeply with the cold and angry Juan (though he may be a self-portrait on some level; this is a very personal film). His sexual hang-ups are further laid bare in lengthy bickering with his wife and then in a protracted and faintly satirical orgy where he watches as Nathalia is ravished by (French-speaking) strangers in the “Duchamp Room” of a sauna. We are also witness to Juan’s cruelty to animals in a scene where he sadistically beats his dog; his penchant for this abuse has apparently raised the suspicions of the local vet. In the past Reygadas’ films have been criticized for their numb but explicit sex and unflinching depictions of animal abuse; Juan seems to be the very embodiment of such criticism, though hardly deserving of his violent demise.

But in the spirit of the piece itself, let’s end with the beginning, which even the movie’s many detractors admire. This is simply an astonishing sequence, as striking as anything unveiled at Cannes this year. Shot in an open pasture hemmed in by mountains and clouds, it follows a toddler (Reygadas’ daughter Rut), apparently alone save for several head of cattle and a handful of dogs. As in the rest of the film, the frame is 1:33, and it’s our first exposure to the picture’s weird, intermittent ghosting effect. It’s like a home movie, but a home movie that’s been damaged somehow…not least in its pointed exclusion of a parental figure. A wide-angle lens reduces the animals to blurred, hulking shapes in the mid-distance. Above the mountains, thunder and lightning roll up on the gloaming. The animals sense tumult, danger; the little girl remains impervious.

We know thunder is an ominous portent in nature, and there is something disturbing about the vulnerability of the child alone in the thickening dusk. The sequence goes long—15 minutes or more—too long, maybe, but too long in a way that’s exactly right. Reygadas forces us to watch the lengthening shadows, and listen to the snorting cattle, the agitated barking of the dogs, and wonder about this barely verbal child, still delighting in the echo chamber of her first words—“Casa” is one—words that may or may not mean something concrete to her.  If Reygadas set out to make an intuitive, pre-cognitive film, then this mysterious, intangible but profoundly resonant prologue comes closest to realizing that dream.