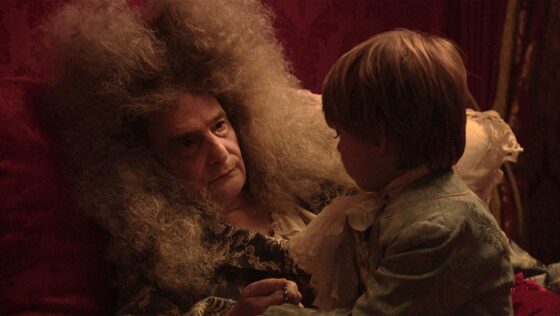 With birds singing above, a 71-year-old Jean-Pierre Léaud sits dressed as the 76-year-old Sun King, pale and powdered under his big wig, nobly stationed amid a twilit rose garden in his wheelchair, finally bidding to his two eager valets: “Onward.” Thus begins Albert Serra’s fifth and most classically beautiful feature, La mort de Louis XIV, with a word—the film’s opening line—that’s suggestive of the sort of linear motions through history’s monumental events so often favoured in biopics and period pieces. Go, onward, in this direction, away from here and towards here, where we are now.

Serra has manoeuvred around this problem of predetermination over and again in his filmmaking by counterintuitively opting to dramatize characters from only the most iconic Western narratives, fact or fiction—Don Quixote and Sancho Panza in Honor of the Knights (2006), the Magi’s trek to baby Jesus in Birdsong (2008), Casanova and Dracula in Story of My Death (2013)—and bleaching these narratives of event. Instead, he suspends his patient fabled figures in atemporal between-spaces, in slow-motion intermezzos far removed from where we know they’ve been and where they’re headed. Minimalist and materialist, Serra’s treatments of the mythological effectively aim to demystify their supreme subjects, and present them as wholly hominal beings that are essentially equal to anyone else—chewing and slurping and swallowing, pissing and shitting and dying as we all invariably do, regardless of how immaculate our conceptions, or how opulent or humble our abodes.

If Serra’s previous films have drafted scenarios for a kind of narratological, conceptual, or at the very least physical near-stasis, Louis XIV seems to operate under the terms of a reversal, a Godardian return to zero which was, perhaps not coincidentally, an idea Godard first explicitly explored in Le gai savoir (1969), starring none other than a 25-year-old Léaud. This isn’t to say the film is ignorant of its very specific timeline; indeed, the film’s press kit even supplies a detailed chronology of the final 24 days of Louis’ life, from the first complaints of pain in his soon-to-be gangrene-infested left leg to his passing on the first day of September in 1715. But after the opening image of Louis taking in the outdoor nursery, we never again see him outside his chamber. He’s done for, fixed in space, his power buried and sinking.

The film likewise stops moving, and becomes a stare into the image of the king’s incremental undoing. The naturally produced sepias, plush velvets, and lavishly claustrophobic mise en scène (from his portraits to the down-tilted mirrors, Louis is always surrounded by himself) all evoke Hou Hsiao-hsien’s drifty, drunk, and timeless Flowers of Shanghai (1998), except that Serra’s camera refuses to move, opting instead for protracted, immobile long takes, usually in close-up, which are only relieved by momentary cutaways to medium shots of onlookers and helpers. In Story of My Death, Serra demonstrated an understanding of cinema’s capacities for producing dream states, with that world’s faraway hybridity—matching a real figure (Casanova) with a fictitious one (Dracula) in a discernibly alternative time space—going some way toward establishing a lucid, liminal elsewhere. His gaze in Louis XIV, though, while warm and sympathetic, is frank, uninterested in cinema’s means for liberating the viewer from the cruel presentness of reality. We are here, what we see is what’s happening, and time does not exist—unless it only exists in order to erase us.

This association and play with reality and time, then, represents something of a return to the Bazinian logic that Serra cheekily applied in Birdsong. Whereas that film exuded a mischievous desire to provoke, asking its audience to endure ridiculously drawn-out takes of wise men coursing deep into deep-space deserts, Louis XIV, without concealing its maker’s droll sensibility, keeps a relatively straight face. Serra is still experimenting with duration here, and his preference for digital, like Lynch and Benning, stems from the technology’s ability to capture unbroken, hours-long takes. But more than his chosen format’s temporal allowances, Serra takes advantage of photography’s fundamental documentary potential, which, in spite of the high artifice inherent in the film’s period diegesis (even Versailles is faked, constructed from scratch in a generic stone chateau), serves to preserve, however illusorily, the bodies occupying the frame.

Quite movingly, Louis XIV urgently records and archives the presence of a man—an actor—whose entire life has been filmed and projected as extensively as was probably possible for someone of Léaud’s generation. As much as we know about the phenomenon of performance and contrived behaviour, there are facts of simply being and doing something in front of the camera that communicate magnitudes beyond whatever Serra might have instructed Léaud to do or say: the quiver in his cheeks as he caresses his snow-white borzois; the unnerving stillness that overcomes his face as he processes a question; and the minute slack that overtakes his chin as a spoonful of egg yolk escapes his mouth, dribbling out and onto his face. Such are the traces that could’ve only been imprinted by a light that’s bounced off the flesh that rests atop this man’s aged nervous system—a kind of cinematic fingerprint that retains the ties to its source no matter how masked he may be under so many layers of makeup and withering skin. If Serra was uninterested in Léaud’s past as an actor when choosing him for this part (as he’s claimed), he at least offers something of a hat tip to François Truffaut—the final freeze frame of Antoine Doinel’s mug in Les quatre cents coups (1959) called forth here in an impromptu entr’acte wherein a haggard Léaud stares frozen into the camera, at us for several minutes, while Mozart’s Great Mass in C Minor blares from the future.

Closer to Serra’s original intent (though maybe not, since the film was first conceived as a 15-day performance piece to have been held at the Centre Pompidou), Louis XIV is also a film that is dialectically concerned with delusions of progress and the necessity of breaking away from history’s cyclicality. Louis’ death occurred on the limbs of the Scientific Renaissance and at the end of a string of major wars, and Serra stages this epochal shift to emphasize both the conflict between medicine and superstition and this moment of precarious tranquility, coasting on the promise of a looming era of peace. (One of the film’s highlights involves Louis saying goodbye to the grandson who will replace him on the throne, urging the boy not to imitate his love of architecture and war, but to please be nice to his neighbours.) History was and is an erratically evolving thing, and it developed blindly; Serra’s is that rare film that realizes this, placing more concern on the moment’s uncertainties and possible directions and less on the outcome that we know played out.

The epitome of this understanding is in his portrayal of the effort to save Louis XIV’s life. Serra shows Louis’ ever-blackening leg being treated by a variety of doctors, from the world-renowned practitioners travelling from the Sorbonne to a “charlatan” (played by Vicenç Altaió, whose face will never not be funny) brought up from Marseilles. The former, certified medics are greeted with uncertainty and skepticism (“Medicine is not an exact science”), while the latter quack serves an elixir concocted from bull sperm, frog fat, and “brain juice.” The effects of their treatments are depicted with ambivalence, Louis’ reaction hardly biased toward the “correct” form of remedy, and Serra—being Serra—emphasizing the foolishness of both. A lone clock’s ticks punctuate each awkward silence as gems like “Syphilis is like roses” and “Don’t you think the bird’s presence is disrupting the king’s convalescence?” hang in the air for as long as it takes for the full extent of their stupidities to emerge. Louis finally croaks, and an autopsy ensues, with his heart passed along to the Jesuits, as per his wishes. And in a spontaneous moment prompted by defeat and optimism, Louis’ personal physician, Fagon, vows to do better next time. Somewhere, offscreen, a fanatic raises her glass and dutifully weeps. Onward.