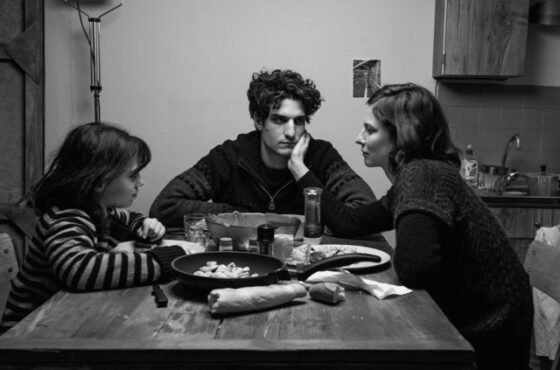 At one point in Philippe Garrel’s La jalousie, eight-year-old Charlotte (Olga Milshtein) asks Claudia (Anna Mouglalis), the new girlfriend of her father Louis, whom she thinks her father loves more. Claudia’s answer: “His father.” In one sense, of course, this reply is an evasion of the question Charlotte was actually asking—i.e., “Does Daddy love you more than he loves me?”—in a bid to (temporarily) avert the inevitable competition for attention that occurs whenever the parent-child bond is complicated by the addition of a third term. Within Garrel’s nakedly autobiographical filmic universe, however, Claudia’s answer is also an invocation of Garrel’s own father, the great actor Maurice Garrel, who died shortly after making a cameo in his son’s previous film Un été brûlant (2011). Yet while this places the film in line with the eulogistic impulse underlying so much of Garrel’s cinema (à la J’entends plus la guitare [1991], the terminal entry in his long series of films chronicling his tortured relationship with Nico), La jalousie’s contextual complexity extends even further when one considers that it is Garrel’s son Louis who plays the pater-worshipping eponym in the film—which not only gives Claudia’s utterance a distinct double edge, but hints toward the far more knotty and peculiar form of jealousy Garrel is alluding to in his title.

One of the last genuine romantics (and Romantics) of French cinema, Garrel has never made any bones about the transparency between his films and his life, his casting of Louis as his onscreen alter ego in all of his films since Les amants réguliers (2004) continuing that autobiographical connection. Yet while his latest films are as rife with uncensored angst as ever, melting in daydreams of death and suicide, there’s a sense that the world has stopped advancing for Garrel—that the further he gets from the traumatic events and tortured individuals that inspired him, the more his unrelieved woe begins to seem merely perpetually maudlin. While his recent work ranges from the expansive sweep of Les amants réguliers to the claustrophobic intimacy of La frontière de l’aube (2008), his films are always endowed with a smothering pathos that threatens to virtually suffocate his characters, if not his audience first.

Initially, La jalousie looks as though it will be more of the same. The film opens with a gaze through a keyhole: we see a woman, Clothilde (Rebecca Convenant), seated at a dining-room table, tearfully pleading with Louis not to leave her; the next shot reveals that the gaze belongs to Charlotte, the couple’s daughter, who is witnessing her parents’ final split after Clothilde has discovered that Louis has been having an affair with Claudia, whom he met at the theatre where he’s been performing in a play. While this voyeuristic opening, and the theme of infidelity, would seem to align the film with Alain Robbe-Grillet’s unrelated 1957 novel of the same name (which employs the title as a double entendre, referring to both jealousy and the jalousie windows through which the narrator watches his wife and her lover), Charlotte’s eavesdropping is the extent of the film’s clandestine surveillance: Garrel’s lovers don’t snoop, even as Louis and Claudia’s relationship itself degrades due to their respective disloyalties to one another. Keeping with Garrel’s guileless nature, La jalousie is a resolutely single entendre, a direct, thorough, and painfully sad confrontation with that deadliest of love’s symptoms, which here spreads beyond its romantic iteration to infect the familial and filial in turn.

While Garrel has claimed, in an oft-cited 1992 quotation, that cinema is an amalgamation of Freud and Lumière (both les frères and la lumière itself, presumably), the spectre of Proust haunts Garrel’s cinema, and La jalousie in particular, just as much as Freud’s does. Like Freud and Garrel, Proust worked through the medium of memory for his studies of feelings and passions, with a particular emphasis on desire. Throughout his work, the greatest satisfaction attainable in one’s desired Other (the “significant” Other) lay in the quixotic possibility that that Other is fully knowable; that the mystery that attracts but also defies comprehension (and thus control) may be extinguishable via possession, surveillance, and knowledge. As detailed in the fifth and sixth volumes of À la recherche du temps perdu, it is Proust’s narrator’s inevitable failure to unreservedly possess his beloved Albertine—as he literally kept her to himself, shut up in their house, all her actions known to him and only him—that elicits the all-consuming jealousy that ultimately destroys their love, just as it does for so many of Garrel’s ill-fated couplings.

When one considers, however, that La jalousie is the second of Garrel’s films to be based upon his father Maurice’s extramarital affair during Garrel’s adolescence—the first being the 15-minute short Droit de visite, made in 1965 when Garrel was only 17, and in which Maurice himself played a part—the Freudian perspective becomes quite telling as well. Jealousy is, of course, a prominent component of the Oedipus complex, in the child’s resentment of his same-sex parent as correlative to his desire for his opposite-sex parent. Yet where in Droit de visite the Garrel surrogate is a young boy who spends his weekends hanging out with his father and his father’s mistress, in La jalousie Garrel portrays his own adolescent subjectivity through the character of Charlotte, which creates a remarkable complication in Garrel’s usual mode of self-reflexivity—and by displacing Maurice’s infidelity (the original sin in Garrel’s cognitive development) onto an onscreen alter ego enacted by his real-life son, Garrel makes of La jalousie’s desired/despised father figure a transgenerational emblem of his own patrimonial pathologies.

To Garrel’s credit, La jalousie is neither excessively aggrieved nor hagiographic in its depiction of Louis, who is enacted by Garrel fils in his dependably mopey, self-centred register (though he does tone it down a little this time). Mouglalis’ Claudia, meanwhile, is portrayed with something close to reverence, and is even afforded the dominant agency in her relationship with Louis. A few scenes after we see Louis kissing another actress in his rehearsal room (presumably mirroring the origin of his affair with Claudia), he asks a provocative question of Claudia while the two occupy separate rooms in his apartment: “If ever one of us cheats, do we say so?” Claudia, nonplussed, walks into the room where Louis is reclining and replies, “You’re so complicated; I only need you to love me.” It’s the most important moment in the film: in deflecting Louis’ semi-confession, Claudia seeks to refute the Proustian possessiveness that is imbricated with the desire for full knowledge of one’s partner. Yet in resisting that invitation to jealousy she only further, if inadvertently, cements the emotional impasse that Louis has created in their relationship, one that will devour their passion and eventually terminate their love, culminating in a classic dumping scene that mirrors the film’s opening—though this time it’s the woman who walks out, leaving Louis slack-jawed and dumbstruck.

For Garrel, who’s far more of a pessimist than Proust, jealousy isn’t just inevitable in romantic relationships but embedded within their very foundations. Yearning to know and to be known by the other, each partner is also convinced that their own selves are too rotten to be fully divulged; shutting themselves up, they shut down the other, until the suppressed resentments culminate in melodramatic crescendos that Garrel indulges with a brio that can invite mockery from the casual cynic. Thankfully, La jalousie largely avoids the overbearing moroseness of much of Garrel’s recent work, while its brevity (a brisk 76 minutes) gives it something of the feel of an exercise, a trait that characterizes most of his best films. And more than any of his work from this century so far, it packs an emotional wallop, precisely because Garrel relegates his gloominess to the margins and tempers his everlasting sadness with the spectral promise of enduring endearment. “I deeply loved your father,” an apparition says to Louis as he takes a midday nap in his rehearsal room, “and he was also crazy about me. Even now, I love him just as much as I ever did.” A lifetime compressed into a simple yet evocative sweet nothing—that’s really all it takes.