By Quintin In CS59, Festivals, From The Magazine, Spotlight, Top Ten Films 2014 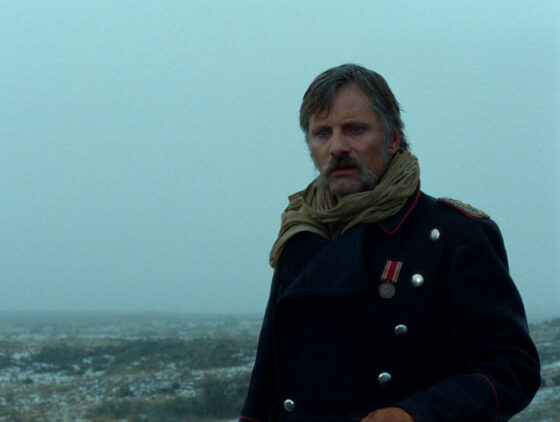 After the completion of his “Lonely Men Trilogy” of La libertad (2001), Los muertos (2004), and Liverpool (2008), people started to say that Lisandro Alonso should do something different. Jauja answers that request: it’s a film with an international star (Viggo Mortensen), features characters who speak in full sentences, and boasts a script (more or less) that Alonso worked on with the well-known Argentine poet and novelist Fabián Casas. A shift in this direction, however, could already be spotted in Sin título (Carta para Serra)(2011), a short commissioned work that the director made for the CCCB in Barcelona in response to a “letter” from Albert Serra, which ends with Casas appearing onscreen to read a text announcing that words have started to count in Alonso’s films. (The film also features an appearance by Misael Saavedra, the protagonist of La libertad, who also shows up briefly in Jauja.)

But Jauja is also the proof that there is a misunderstanding regarding Alonso’s filmmaking, which is commonly considered to be a kind of theory-free ethnography, bringing an observational, naturalistic approach to the study of solitary and primitive men in remote and isolated regions of Argentina. Considered in this light, however, Alonso’s most ethnographic film would be Fantasma (2006), which uproots the main characters of La libertad and Los muertos from their environments and maroons them in a movie theatre in Buenos Aires. Jauja helps us to understand that Alonso is not interested in looking at his characters from above, from the certitude of civilization; rather, he is a filmmaker who regards cinema as a kingdom unto itself, and a link between other orders like nature, history, and society. Alonso’s cinema is premised upon the belief that cinema is something that can never be fully revealed; it is not (and is never) merely a technical means of representing an external, sovereign reality, but rather a way to explore certain mysterious connections in mysterious ways.

Jauja opens with a text that refers to a place in Inca folklore, a “mythological land of abundance and happiness” which men “tried to find but got lost on the way to that earthly paradise”—a description which also evokes the legend of El Dorado, whose fatal thrall drove Klaus Kinski’s megalomaniacal conquistador to his doom in Herzog’s Aguirre, the Wrath of God (1972). There are some echoes of Kinski’s Aguirre in Mortensen’s Gunnar Dinesen—a Danish engineer who guards the virginity of his daughter, Inge (Viibjork Malin Ager), with the same devotion that the incestuously inclined Aguirre protected that of his—but Jauja is not about an adventurer going mad. Nor is it about Zuluaga—a crazy deserter who leads a tribe of natives dressed as a woman—who on the surface resembles the Kurtz of Apocalypse Now (1979). These cinematic allusions are merely the ground from which Jauja takes off. Beginning in a fort (that’s never seen on screen) in 19th-century Argentina, a young country that is conquering Patagonia by killing thousands of Native Americans, Jauja is, in its first third, less about historical facts than what writers—from José Mármol, Lucio V. Mansilla, and José Hernández to Borges and César Aira—and filmmakers have projected over those facts. (There’s even a ball “given by the Minister of War” that’s never shown, but brings to mind a John Ford cavalry western.)

This section is the Casas part of the film, its more unreal-than-real context going fully surreal in the second part, Mortensen’s section, in which Inge escapes into the desert with a soldier and Dinesen goes after her on horseback. (The images of this forbidding landscape, shot on 35mm by Aki Kaurismäki’s cinematographer Timo Salminen, are pure beauty.) While Dinesen here becomes, in outline, the typical Alonso figure—a man alone in the wilderness, heading towards an uncertain destiny—Mortensen plays him as both an Alonso actor and a star: he’s pure physical presence, strength and frailty combined. Dinesen’s quixotical meanderings lead to a series of crazy events, crazier than anything that has ever been in an Alonso film—helped along considerably by the presence of Zuluaga, who contributes scenes of deadpan, even slapstick humour. (At one point, his hand enters the frame to steal Dinesen’s gun and hat while the engineer is killing his daughter’s captor.) And just when this section (and the film) seem about to end, the third part—Alonso’s section—starts, as Ager’s Inge wakes up in a castle in present-day Denmark; the dog that haunted Mortensen in the second part turns out to be the girl’s dog, which had become ill because of her absence.

Needless to say, this turns the entire film upside down, in an even more radical way than the original last scene from La libertad, where Misael laughs with the film crew and the whole ethnological dispositif is erased, revealing the entire enterprise as only a film with an actor, as artificial as any other film (perhaps more artificial, in fact). That scene, however, isn’t in the final cut of the film: it was edited out under pressure from Cannes, who requested its removal as a condition to program the film in Un Certain Regard. Thirteen years later, Alonso—whose films have always screened in Cannes, but never in the Competition—was able to retain his intended ending for Jauja, though once again there was pressure from the festival to remove it. Cannes, like many major festivals, prefers to screen films where content and style are clear, distinguishable, uniform, rather than deal with a film where not even the filmmaker knows what exactly is going on. And Alonso is one of those few filmmakers—I can only think of Kiarostami or Monte Hellman as other examples—who understand cinema as the sole medium where there’s no real divide between true and false, dream and reality, film and filmmaking. Making a film for Alonso is taking a trip into the unknown, a collaborative journey to a place where civilization can interact with nature, where different eras in history collide, where national boundaries matter less than a common attitude, where things can magically pass from one order of reality or fantasy or civilization to another (e.g., the keychain that changes hands in Liverpool, or the toy soldier that is found on both sides of the ocean and two centuries apart in Jauja). Like a Proustian device, a film is the place where different worlds come together, where dreams, memory, history, and desire become one, where there’s no distance between actors, characters, and filmmakers, between facts, stories, and legends.

The secret is that Jauja, the promised land that men dream of, is cinema itself. But when the dreams end in the film’s final shot, there is still something there: a herd of sea lions, silently observing and laughing at the confusion of the filmmaker and all the rest of us, echoing the end/beginning of Augusto Monterroso’s “El Dinosaurio,” which is likely the shortest story ever written (“When he woke up, the dinosaur was still there”). The animals are very quiet and discreet, although you can hear their mating calls on the soundtrack. The shot is brief, but Alonso took the trouble to record it in a place called La Lobería—one of the film’s carefully selected locations—where sea lions are known to gather. And there’s no doubt that it’s a great ending.