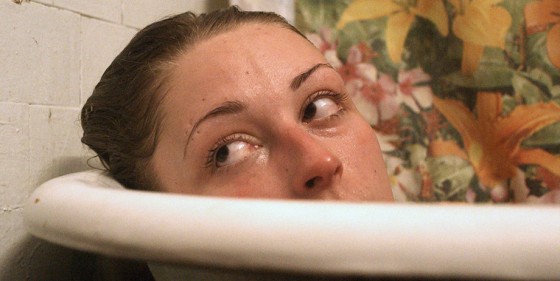 The opening sequence of Nicholas Ray’s They Live by Night (1948) depicts the warmly lit faces of soon-to-be lovers Bowie (Farley Granger) and Keechie (Cathy O’Donnell) hovering close to one another, looking to the other for comfort or reciprocation or heaven knows what, while music burbles and swells on the soundtrack. As portentous cum poetic titles (“This boy…and this girl…were never properly introduced to the world we live in”) impose themselves over this image of precarious young love, harsh strings start shrieking and the pair looks apprehensively off-screen, already—even in this blissful, diegesis-free no-place—the pariahs they will be for the rest of the film. A lifetime removed from Ray’s debut, the cinephilic Safdie brothers begin their otherwise headlong and importunate Heaven Knows What with a comparably languorous idyll—a moment of solace that this boy (Caleb Landry Jones’ Ilya) and, especially, this girl (Arielle Holmes’ Harley) won’t find again in the abrasive film that follows.

While the film’s portrait of the unhinged, impromptu lives of young heroin addicts on the Upper West Side is no less empathic toward those cast out from “the world we live in” than was the romantic Ray’s, the Safdies’ strain of doomed love is rather more curdled than They Live by Night’s tragic vision of redemptive romance crushed by uncaring and insuperable social forces. The outer dark that threatens Ray’s young lovers is replaced by inner demons: immediately following that moment of pre-credits bliss, the Safdies show Ilya staring at a library computer screen and pointedly ignoring Harley’s lovelorn appeals. She threatens to kill herself to prove her love and soon proceeds to attempt just that, slicing open her forearm in the middle of a New York street, her pathetic moment of would-be self-sacrifice captured from a remote and chilly distance.

Thanks to this and other comparably harsh scenes, much has been made of the realism and authenticity of Heaven Knows What, and certainly many of the film’s most visceral effects derive from this documentary texture. But this verisimilitude is part of a larger orchestration: a series of bewildering swoons back and forth from intimacy to objectivity, from love to despair, from dulcet musical interludes to anguished screams on street corners. Without romanticizing their often insufferable and alienating subjects, the Safdies extend them both a measure of compassion and moments of seemingly heaven-sent reprieve. The Safdies may be realists but they’re also astute artificers, as well as old-fashioned doomed romantics in the same mould as Ray: their films evince a staunch belief in pie-in-the-sky idealism—mad love in Heaven Knows What, paternal devotion in Daddy Longlegs (2009), dreams of NBA stardom in Lenny Cooke (2013), a life free of consequence in The Pleasure of Being Robbed (2008)—and bear sympathetic witness to the wanderings of their savage innocents and aimless, unenlightened rebels.

Even the behind-the-scenes story of Heaven Knows What sounds a bit like an impossible old Hollywood dream, however bedaubed with authentic grit. The details are by now familiar: how the film’s guileless, clamorous star Holmes had been living on the street and doing heroin when she encountered Josh Safdie on the subway; how she gradually told Safdie her tale of addiction and homelessness, which Safdie encouraged her to write down; and how he, brother Benny, and frequent collaborator Ronald Bronstein adapted Holmes’ unpublished memoirs into the film, starring Holmes as a lightly fictionalized version of herself and featuring many of the actress’ real-life acquaintances in supporting roles.

As filtered through the Safdies’ film, Holmes’ experiences with fellow addicts and enablers have the ring of truth about them, whether they involve her character Harley’s antagonistic relationship with her black-metal-on-a-budget boyfriend Ilya (fair-haired pro Jones, eyes convincingly deadened beneath locks dyed a sooty and haphazard shade of pitch) or her fair-weather reliance on penny-ante dealer Mike (amateur Buddy Duress, a strutting, irrepressible presence onscreen, but currently locked away in real life). There is a feeling of numbing familiarity, too, about the settings the characters drift through: the fast-food joints they commandeer for headquarters, the ramshackle flats and unfinished basements they nose out and nod off in, the neglected corners of parkland where they congregate to dish about each other’s hardships, share out their scores, or, in one surreal confrontation, chuck an improvised ninja star at a rival.

At times, the film can seem as authentically makeshift as its assorted flophouses: it is less a story than a scrimmage, an assortment of scenes in which characters yell or scheme or plead for love or drugs or understanding to little end and lesser gain, shot in a disarming variety of lens lengths and from a disorienting number of vantage points. (Credit the film’s virtuosic verité style to cinematographer Sean Price Williams, who deserves a co-author credit along with Holmes, Bronstein, and the Safdies; more so even than his extravagantly quotidian slow-mo work in Robert Greene’s Actress or the finely grained anthropological studies of The Vanquishing of the Witch Baba Yaga, Heaven Knows What bears Williams’ signature in every frame.) From the opening suicide attempt through the scenes of spare-changing and shoplifting to its climactic flailing about amid lanes of racing traffic, the film is shot, acted, and cut in a roughly realist register, uncomfortably close and disarmingly raw. But the thoroughness and care with which certain shots are conceived—this one picking out Harley from an imperious overhead angle, barrelling hell-bent down a deserted street; that one tucked tight in an overhead bunk with her, observing her syringe sucking up drugs from a bottle cap—mitigate that sense of immediacy, elevating mere slice-of-life slumming into a highly creative treatment of actuality.

The searching and dreamlike tone of that early, wordless close-up sets up a kind of counterpoint that is returned to throughout the film—call it oneir-realism. That the Safdies temper verisimilitude with romantic fancy should come as no surprise to those who recall The Pleasure of Being Robbed’s whimsical romp with a polar bear, Daddy Longlegs’ fight with a monstrous mosquito, or even Lenny Cooke’s chance to turn back the clock and talk to an athlete eerily like his cocksure younger self. In Heaven Knows What, however, such fantastic asides get subsumed within the fever dream that serves as these characters’ daily reality. Nowhere does the film more subtly conflate realism and dream than the minutes-long, uninterrupted tracking shot under the opening credits: nightmarishly choreographed and set to a screechingly distorted soundtrack, the shot follows Harley as she navigates willy-nilly through a Bellevue ward filled with fellow castoffs and wild-eyed hoydens. A danse macabre that both Holmes and Williams pull off with élan, this shot is virtually the movie in miniature: an anguished suite of chest-beating confrontation and spooked backing-down, a raw and bleeding chunk of reality that’s still highly filigreed, and a gauntlet thrown aggressively down by filmmakers—and an actress—unafraid of coming off crazed. This girl may never have been properly introduced to the world, but the Safdies have faith, however romantic and misguided, that she can at least thrash her way through it.