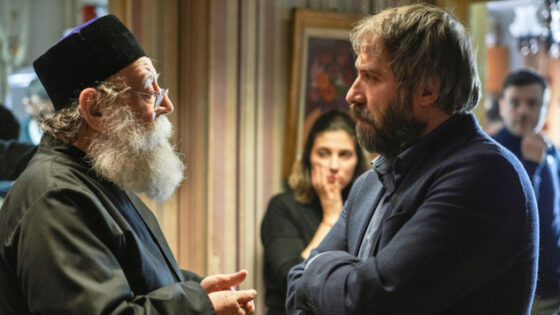 At the dawn of the decade, a brief break appeared in the first wave of New Romanian Cinema. Though of similar historic and cinematic concern, a number of the films produced during this period—including Corneliu Porumboiu’s The Second Game (2013), Cristi Puiu’s Three Interpretation Exercises (2012), and The Autobiography of Nicolae Ceausescu (2010), by elder statesman Andrei Ujica—adopted formal strategies unique in relation to the work that had set the movement’s stylistic coordinates in the mid-’00s. Considering the recognizably austere, culturally interrogative output of these and other filmmakers in the years since (see, most impressively, Porumboiu’s The Treasure and Radu Muntean’s One Floor Below, both from 2015), these otherwise fleeting few years have arguably proven as crucial as they were initially deemed cursory—less a wake than an interlude portending an inevitable re-entrenchment.

Cristi Puiu hosts a wake of a different kind in Sieranevada, one of the strongest and certainly most daunting selections in this year’s Cannes Competition (which, instructively enough, also featured Cristian Mungiu’s comparatively pro-forma Graduation). Running 173 minutes, Puiu’s first narrative feature since the polarizing Un Certain Regard standout Aurora (2010) pushes forward as furiously as the earlier film held firm with distinct and disquieting reserve. In an equally provocative manner, Puiu wields dialogue as he once did silence, staging a family gathering (one based loosely on his own experiences) in extended flights of near-real time drama with few of the temporal elisions that effectively posited his serial-killer chronicle as a work of metaphysical recrimination. If this description seems to position the film closer to the headlong narrative momentum of The Death of Mr. Lazarescu (2005), then it’s only tangentially; Puiu’s shape-shifting cinema is as prone to the measured as it is the visceral, as taken with the dire as it is the comedic. Few contemporary filmmakers so fluidly negotiate such disparate extremes.

Anticipating the domestic congestion to come, the film opens with a confrontation over an errantly parked car, followed by a petty argument between a middle-aged man named Lary (Mimi Branescu) and his wife Laura (Catalina Moga) as they drive to what we soon gather to be a commemoration for Lary’s recently deceased father, Emil. These are just two of the dozen-plus individuals who eventually descend upon the small Bucharest apartment of Nusa Mirica (Dana Dogaru), a woman of Eastern Orthodoxy who has summoned a host of family and friends for a ritual dinner that will allow her husband’s soul to pass on to heaven undisturbed. Only slowly over the course of the day will the relationships between the many guests be established. Amongst others, there’s Lary’s brother, his sisters, cousins, aunts and uncles, in-laws, children of various ages, and an unwelcome, inebriated Croatian friend of the family’s twentysomething niece—all ostensibly waiting for a priest (Valer Dellakeza) and his deacons to arrive to bless the proceedings and facilitate the father’s forgiveness, something only to be granted once the dead man’s nephew, Sebi (Marin Grigore), dons one of his uncle’s ill-fitting suits.

If this all sounds, as many critics have pointed out, like a send-up of a certain Samuel Beckett play (though Thomas Bernhard’s Woodcutters also comes to mind, as does Buñuel’s The Discreet Charm of the Bourgeoisie [1972]), then Puiu is shrewd enough to exploit the associations to situational and sociopolitically humorous ends. Save for the opening sequence and a key moment late in the film when Lary, again with his wife in the front seat of their car, reminisces fondly and emotionally about the particulars of his father’s past, the entirety of the film transpires in the mother’s cramped apartment. Moving freely from room to room and conversation to conversation, Puiu and cinematographer Barbu Balasoiu capture the ensuing chaos with an observational yet inquisitive mobility, mapping the interior and intergenerational coordinates of the celebration with comprehensive skill. So impartial and mild-mannered as to appear almost apathetic, Lary is the Switzerland in the family’s fraught foundation. Surrounding him is the conspiracy-spewing Sebi, whose theories on 9/11 and the Charlie Hebdo attack (Sieranevada is set in its immediate aftermath) are a source of constant debate; the garishly dressed and opinionated Aunt Evelina (Tatiana Iekel), who speaks positively of the communist ideal, much to the chagrin of Lary’s sister, Sandra (Judith State); Emil’s youngest son Relu (Bogdan Dumitrache), a disillusioned soldier; and the emotionally distraught Aunt Ofelia (Ana Ciontea), who spends much of the film’s second half in hysterics over her philandering husband Toni (Sorin Medeleni), who not only refuses to own up to his indiscretions, but won’t leave the apartment despite resounding encouragement to do so.

As the most formally rigorous of the New Romanian guard, Puiu appears to take particular pleasure in navigating such a confined space. Arranging multiple bodies within typically unadorned compositions, Puiu approaches the film’s mise en scène like an equation to be solved, adding and subtracting characters from the frame with subtle camera movements and an expert sense of tension and release. By this point the Romanian style of long takes, exacting setups, and severe minimalism is ripe for parody, something Porumboiu recognized and wryly satirized in When Evening Falls on Bucharest or Metabolism (2013), and which Puiu lampoons here with a less pronounced, but similarly perverse, determination. (This satirical touch is something lacking in Mungiu’s often self-serious cinema, prompting questions as to the extent of its creator’s self-awareness.) As doors repeatedly slam shut and discussions trail off, the camera often calmly pans—as if possessed, per Puiu, by Emil’s spirit—to an adjacent room or down a nearby hallway, picking up a new conversation and reorienting the drama in accordance with each break in exposition. As viewers we’re very much at the mercy of the director’s impulses; unlike the characters, we can’t remove ourselves from the action. The narrative’s seemingly ever-elusive feast, along with the deliberately misspelled title—itself an admittedly arbitrary but nonetheless clever choice in the tradition of self-important films flaunting metaphorically loaded titles—further serve the film’s self-reflexive sensibility. Whether this all registers as humorous or taxing (or both) will likely be well determined by the viewer by the time the priest casually extols Polonius’ immortal maxim regarding brevity and the soul of wit, a notion steamrolled by each successive, barbed pronouncement.

Despite the film’s mordant humour, the ghost of communism and the reverberations of the Ceausescu regime continue to be the great themes of contemporary Romanian cinema. Other recent atrocities receive equal airing throughout the film, but as a microcosm of communist influence and the communal ideology it fostered only to eventually betray, the film is a potent portrait of lingering disenchantment and nationalist anxiety. With little hierarchal order to the proceedings—but with distinct delineations between national, political, and theological dispositions—the film manages to hold everyone accountable, including Puiu (whose resemblance to his lead actor further posits Lary as the director’s surrogate), without implicating any one sensibility or ideology. In Puiu’s estimation, family is not simply the most recognizable and applicable corollary for Eastern Europe’s thorny and paradoxical political identity, but a source of personal integrity even as human nature and outside influences threaten to compromise the very ideals upon which such lineages are built. As if to reinforce the futile nature of the bourgeois plight, a majority of the film’s guests have dispersed by the time dinner is finally served. Sitting down to eat as, naturally, another argument commences in the next room, Lary and his brother Relu begin to chuckle contagiously, the incessant chatter once and for all devolving into an involuntary display of amusement. Sometimes all you can do is laugh.

Posted in CS67, Festivals, From The Magazine, Spotlight