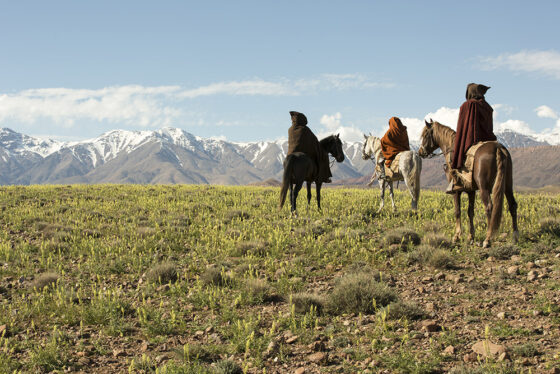 A Sufi western? In the parole of Cannes’ critical taxonomy, the designation bestowed upon Oliver Laxe’s desert-fevered, Semaine de la Critique-winning allegory would seem reductive if it didn’t allude, paradoxically, to the film’s radically expansive nature. This leads one to wonder just what “a Sufi western” might look like, or how it could be fulfilled, in cinematic terms. A clue to Laxe’s strategy can be inferred, as with most films, from the very first frame: Mimosas opens with a shot of a wall mural depicting an ancient village set against the background of a vast mountain range, absent any defining context. The mural’s paint is leached of colour, peeling away in patches. Within the wall is a door, and upon the wall a shadow, cast by a nearby tree. Offscreen, voices of villagers can be heard, but are only registered as ambient noise.

This initial tromp l’oeil serves as a convenient canvas on which to roll out the title credits, but it discreetly yet determinedly acts as a site for Mimosas’ abiding sense of concomitance, expressed in dualities of time, place, and perception all of which are, Laxe will endeavour to show, related to faith. Are we as spectators posited as both “here” (where the mural suggests) and “now” (as the camera suggests)? Does the door interrupt the mural, or does the mural hide the door? What is inside? Is the unseen tree of particular consequence, its spectral registration somehow more “real” than the thing itself? Subsequent shots of the mural reveal an ancient waterfall leaking onto a modern sidewalk, as if history itself pours into the present by way of the imaginary. The montage cedes to an image of the painted mountains, a quaintly pastoral representation of the intractably natural; this will, for Laxe’s wandering caravaneers, become a crucible for body and soul. “We’re in the mouth of a sleeping giant,” shouts one weary sojourner, descending with mule in tow down an impossibly terraced slope, invoking the distinction of whether the sleeping giant in question is the mountain, or God, or God’s will manifest in the mountain.

Such conceptual conflation would seem to presage Mimosas as a continuation of Laxe’s 2010 debut You Are All Captains’ navigation of the fiction/documentary Möbius circuit, which Laxe appears to have metabolized in the service of something more ambitiously scaled, in both form and content. Not even Ben Rivers’ making-of fantasia (The Sky Trembles and the Earth Is Afraid and the Two Eyes Are Not Brothers, 2015)—scarcely an enticement to Laxe’s enterprise in spite of its enticing theoretical underpinnings—prepares one for an accounting of Mimosas’ sheer otherness: its peregrinating narrative, its intimation of something elemental, and its deceptively sincere petition for faith as an active, embodied (rather than didactic) engagement with the world, filmmaking not excluded. Deceptive, indeed, because the film is composed, at least superficially, of putatively arthouse tropes: longueurs in which non-professional actors (in lugubrious fashion) are employed to traverse cruel (and therefore all the more “stunningly visual”) landscapes with an overwhelming sense of futility, all while the seemingly “true” film lay in pursuit of an unseen ontological consideration of cinema-as-medium. But Laxe brings to bear on such conceits a less fashionable conception of the film as a means of encounter, constitutive of faith itself: the director yields to nature and his subjects as a ritual act of supplication in recognition of a certain plenitude. Perhaps the machinations of genre, combined with the undisclosed behaviour of the director on-set (for which his tongue, pace Rivers, might deservedly be cut off), betray such a pious translation of Mimosas’ assets, but it’s an angle that affords traction when faced with the film’s inscrutable register of narrative opacity and peculiar transparency of execution.

So, genre then: Mimosas does have a plot. A rag-tag caravan is enlisted to escort a dying Sheikh through Morocco’s Atlas mountain range, so that he may eventually be buried among loved ones. Sensing mutiny from the arduous journey, the Sheikh wanders off alone on his horse, anticipating if not expediting his own death. Two suspiciously renegade members of the caravan, Saïd and Ahmed, vow to fulfill the vain wish of the Sheikh’s widow, that he be given a proper burial in Sijilmassa, over the mountains. With the Sheikh’s body wrapped and strapped to a mule, and presumably motivated by something other than good will, the duo feign to know their way and set off into the rugged landscape, joined by an elder and his mute daughter. With a slight but uncanny trick that defies the spatial/temporal axis, Laxe momentarily transports the tale to an unnamed city, perhaps present-day Skoura, where taxi drivers queue for the daily lottery of fares. Here an interlocutor—the idiot Shakib, conjured from a dusty lot while entertaining laymen with his pacing sermon—is commissioned to intervene on the erstwhile pilgrimage for seemingly spiritual purposes, divined and dispatched by ecru taxis anachronously traversing the desert floor. Shakib arrives to shepherd the wanderers and is received with skeptical bemusement (especially by Ahmed, who’s “never been to a mosque”), though gradually his willful optimism becomes infectious, convincing in the faith that their “mules will fly” through the insuperable mountains.

Laxe proceeds to put this incongruous alliance through their paces: trudging through snow or vast stretches of parched earth, ascending treacherous formations, treading rapids during an ambush. All the while the travellers subsist on a diet of hashish and campfires, with food and sleep deemed superfluous to requirements in Laxe’s rather archetypal vision (the narrative is not beholden to notions of extended duration so much as space). What transpires, however, is a curious case of competing faiths as the journey exacts the cost of besiegement, both physical and spiritual. Laxe refrains from playing the pilgrimage for heroics or for irony, though it is weighted with a certain moral gravity as well as leavened with a touch of absurdist humour. “Now what?” reproaches Saïd, as they reach a summit from which Sijilmassa should be visible. “I thought it was going to be there,” retorts Ahmed, who in reverse shot is belittled by endless peaks on the horizon, a landscape bruised in shades of purple and brown as far as the eye can see; a monument of gorgeous futility awaiting them, abstract as a mural.

Mimosas’ real gambit resides less in its plausibility as a displaced western (the narrative, at times, reflects the strains of a four-year shoot and edit) than in its candid embodiment of a certain moral/spiritual concern. The Sheikh’s corpse is no more weighted than Rivers’ reveal in The Sky Trembles of a stunt dummy floating downstream, but the enigma of delivering it to a proper “home” evokes the seemingly universal sentiment of empathic conduct: Do we not all somehow wish for such tender disposal? Given the potentially fatal nature of the journey for Ahmed, Saïd, and Shakib, the question of doing the right thing evolves from that of a plot conceit to something endowed with immanence. “Blessed” co-pilot Shakib, on his first spiritual mission to guide the wandering souls, stumbles toward grace, appearing risible in his ritual invocation of Allah—as if channelling a Marvel Comics version of Islam, all fists clenched and eyes shut. But seen against the increasingly bedraggled Ahmed, shocked from taciturn complacency by the inevitable crisis that is more or less nature itself, Shakib’s gestures reflect a humility of faith, and as such appeal more as a survival tool than the protestations of the disbeliever. The mules never take flight, but mountains, ever so subtly, may depart.

Much will be made of Laxe’s explicit rhyming of the tale with the stations of prayer in Islamic worship, in which the symbolic poses of performing salat—standing, bowing, and prostration—are enlisted as a comment on the metaphysical nature of the tale, and particularly the stages of enlightenment as they relate to adversity (witness the evolution of Ahmed’s increasingly awakened face). Implicitly, however, it is in the depiction of nature, and man in nature, that Laxe evokes the intermediate position of existing between annihilation and freedom, chaos and salvation. Abetted by the pellucid but not too sumptuous Super 16 cinematography of Mauro Herce, Laxe presents nature as intractable but nevertheless divine, part of a holistic conception of being. We may experience nature as inhospitable, vicariously through Mimosas’ non-professional models emulating plight, but there is nothing intrinsically inhospitable about nature, as it is part of divinity itself, the theory goes. Such theological context accounts for much of Mimosas’ lack of inflection, of its interstitial location between the sacred and mundane. Iconic images of humbled human figures dotting the landscape, of vintage taxis traversing Saharan horizons at dusk, speak to a more hermeneutic, rather than Herzogian, vision.

Still, in keeping with the film’s design as a canvas (or layered mural), and an acknowledged cinematic construct (as with You Are All Captains), Mimosas becomes a repository for Laxe’s exegesis of spirituality in cinema. It’s as if Laxe were trying to refract some of the burnt light in Pasolini’s Medea (1969), channel the brotherly love of Rossellini’s Flowers of Saint Francis (1950), slouch toward Zanzibar in the manner of Garrel’s Le lit de la vierge (1969), and attempt to find life in the chivalrous inertia of men astride horses à la Bresson’s Lancelot du Lac (1974). The rescue of a slain caravaneer’s daughter from the clutch of a barbarous tribe recalls no less than The Searchers (1956), albeit scarcely by way of cowboy bravado but rather Sufist purity of heart. “How will we do it?” doubts a faithless Ahmed and, in a turn that plays at once like Hollywood parody and purely devotional deed, Shakib charges forth with peremptory abandon: “With love!” he declares, sounding the film’s hitherto dormant hymn to battle.

Mimosas’ denouement attests to the film’s provisional narrative arc, and somewhat simplistically strikes a morally equivalent variation on karmic retribution. Still, the film has left an indelible impression for the sheer magnitude of its scope, within which lies a rudimentary reminder to those who are murderously zealous or utterly effete: Don’t be afraid. Strengthen your faith. Mimosas takes a rather circuitous route to a concisely unassuming but radical proposition, posed by the practicing prophet Shakib to a deplorably enervated Ahmed: “Tired of what?” he pleads emphatically, making the case for Mimosas as an incitement against indolence. To repurpose Deleuze’s appraisal of Garrel, one could say that Laxe’s cinema is not pious, although it is a cinema of revelation. The notion that “we are all blessed,” proclaimed by the taxi drivers competing for fares in the film’s contemporaneous realm, is manifest in Laxe’s deployment of non-professional actors. Captains all, who’ve carried Mimosas’ story through mountains. A story you can tell to others if you want to.

Posted in CS67, Festivals, From The Magazine, Spotlight