Festivals | Doclisboa 2018: A Scream into the Void 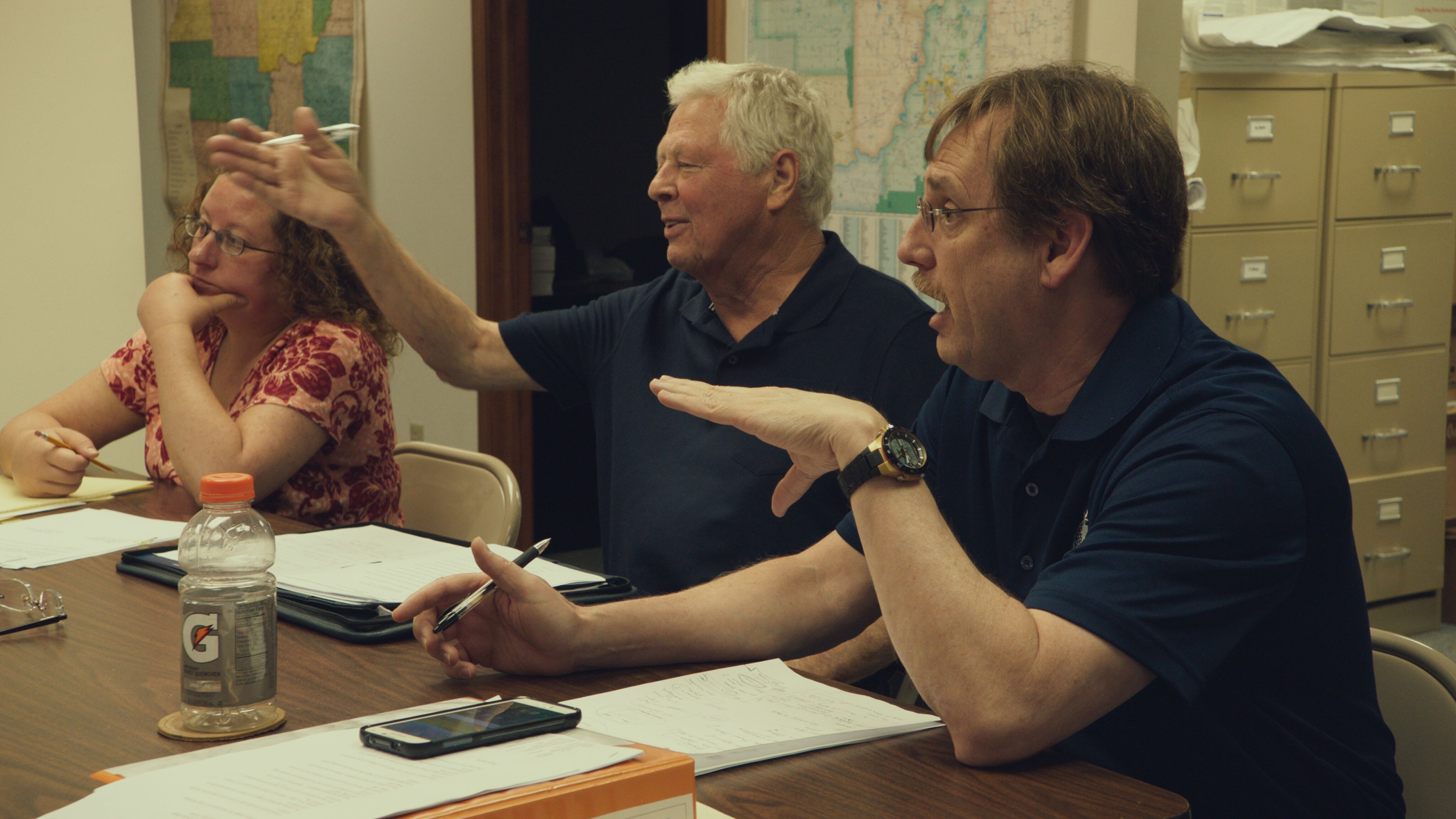 Almost anyone who has spent a prolonged period at a film festival understands the soothing familiarity of a good pre-movie festival spot, those throwaway bits of business that bleary-eyed delegates sit through upwards of 40 times over the course of a week. Everybody reading this doubtless has their favourites; my sense is that when such a spot feels particularly on the money, it is because we are instinctively linking it to a general idea of the ethos—atmosphere?—of the festival as it is uncoiling before our eyeballs. As a result, as I gather my thoughts about the 16th edition of Doclisboa, I’m as drawn to its specially-produced festival spot—a pugnacious 20-second job in which all manner of crockery is tossed through an open window and crashes senselessly, asynchronously on an old carpet—as I am to any movie when mustering up something of worth to say about the aesthetic experience fostered by this marginal, rag-tag, rebel movie festival.

Of course, there is always the difficulty with a festival as rich and as well-cultivated as Doclisboa that much of its treasures will elude even the most industrious cinephile, that the carefully laid pathways that thread from movie to movie will be lost in the shuffle. Is there any conceivable way to link experimental treasures like Kidlat Tahimik’s Who Invented the Yo-Yo? Who Invented the Moon Buggy? (1979), Chris Kennedy’s Watching the Detectives (2017), and Hiroatsu Suzuki and Rossana Torres’ Dovzhenko-like Terra, or are they only worth mentioning outright as perhaps the festival’s three best movies? I’d recommend Tahimik’s magisterial, mischief-making, circuitous fib of a movie to anybody; and though it has more than its share of delirious, giddy joys, like the festival spot, it has just enough formal dissonance in it to provoke a healthy dose of dislocation in any vigilant viewer. The great Suzuki-Torres movie, in its way about as far from Tahimik’s or Kennedy’s facetious and good-natured aesthetic as possible, is about a spare rural community in the Alentejo region, a seemingly isolated riverside locale draped in a lingering membrane of ashen smoke, where a small group of men manufacture charcoal in vast brown ovens that protrude out of the ground like huts in the desert. Using this as a starting point, the filmmakers treat the region as a site of almost primeval energy, a spare, unforgiving landscape in which men work, and work with the encompassing quiet of a lifetime spent labouring in relative solitude. Like Who Invented the Yo-Yo? Who Invented the Moon Buggy?, the film is as much about its own sophisticated play with form as anything else; sound and image are putty in both Tahimik and Suzuki-Torres’ hands. And likewise, seeing Watching the Detectives projected from a 16mm print deepens the movie’s already astonishingly playful consideration of digital textures; I had clearly never seen a Reddit post treated as an aesthetic object until I saw this movie.

Bizarre contrasts of texture abound too in Luis Ospina’s films, the enigmatic subject of Doclisboa’s 2018 filmmaker retrospective. Ospina’s Pure Blood (1982) opens with a bravura set-piece in which the camera creeps around a crime scene where blood is spattered operatically on the walls, a bruised corpse is in a heap on the floor, the light a quivering fluorescent red. Meanwhile, his elegiac and fragile Our Movie (1993) slides from the miseries of the deathbed where Ospina finds his friend, the artist Lorenzo Jaramillo, to the act of painting to Jaramillo’s perception of the kind of movie Ospina is trying to make—he is determined not to be a passive subject delivering sage-like wisdom one aphorism at a time—and finally, a loving discussion of B-movies. For those of us not in the know, it is a surprise to hear that the painter was such a committed cinephile, lover of the kinds of movies Pure Blood is paying tribute to. Indeed, a close female friend of Jaramillo’s implies at one point that the cinema was in fact, above all else, the man’s true passion. Where Pure Blood is so steeped in the intricacies of the genre movies it is meticulously recreating on a relative shoestring in the streets in and around Bogotá, both Our Movie and Ospina’s later A Paper Tiger (2007), about the leftist muralist Pedro Manrique Figueroa, are remarkably low-key and direct in approach. In both, the former critic’s aesthetic strategy is, at least initially, to rework some the material qualities of his subjects’ art—wild colour and a kind of lateral visual panorama in the former, exploded collage in the latter. That I barely scratched the surface of Ospina’s work with these movies is I guess evident.

Indeed, from Our Movie to a new entry in the TV series Cinéma, de notre temps about Jean-Claude Brisseau (Laurent Achard’s Brisseau, 251 rue Marcadet) to Diego Governatori’s blistering Quelle follie, 2018 at Doclisboa was evidently also the year of the confessional—whether recorded surreptitiously as in the Brisseau doc or the result of a stark and tender collaboration as in Quelle follie. It’s difficult to watch Brisseau, 251 rue Marcadet objectively—that is, in the fashion one can only assume a documentary about a great director is intended to be seen. Achard begins, as with the final scene of Ruth Beckermann’s The Waldheim Waltz, by outlining the construction of a certain kind of intellectual theatre, a space in which to perform some representation of one’s tastes. Brisseau is seen perched at the head of a table as people duck in and out of the room, set up lights, check the main camera, bring food or beer to him and his interlocutor, and make both up for the camera. Brisseau, speaking imperiously about Pasolini or Hitchcock or a sequence from Aliens (1986), is the centre of everything and yet is curiously detached, aged, and ghost-like. The preliminary discussion, before the “true” interview begins, goes nowhere, looping back on itself in perpetuity. Brisseau often finds himself alone, adjusting carefully in his seat or staring into space as the crew flit indifferently around him like moths late at night on a garden porch. As in Quelle follie, what’s disconcerting, then, is not merely the furtive view of cinematic space as it is being fashioned in real-time—space later assumed in Brisseau, 251 rue Marcadet as the documentary takes a more “conventional” turn and “switches” to the A-camera—but Brisseau’s own interactions first with his companions and later with a female assistant. Indeed, he only really seems to come alive as he flirts lasciviously with this young woman, eying her figure like a hungry toad. In Quelle follie, a young intellectual, recently diagnosed with Asperger’s syndrome, dominates the movie, practically beckoning the camera through the streets as he expatiates on every painful aspect of his condition. Nevertheless, unlike the Brisseau movie, these dialogues are, at least until Governatori begins to force some of the central metaphors, liberating. It is very easy to get high on the guy’s bristling, active intellect, even as the portrait becomes ultimately a despairing one. Like Ospina’s great termite film about his painter friend, Quelle follie and Brisseau, 251 rue Marcadet are, in each of their divergent ways, painfully revealing depictions of intellect and comportment.

In Omar Amiralay’s masterpiece Everyday Life in a Syrian Village (1974), which appeared in the Sailing the Euphrates sidebar, illiterate villagers in the poorest regions of Syria butt up against the educational and cultural program pushed by the central Ba’athist regime. For all their apparent goodwill, the city bureaucrats and teachers who arrive in these rural villagers seem ill-equipped to navigate the intricacies of local customs as well as the grave limitations of an illiterate, superstitious, and malnourished citizenry. Compare this with Frederick Wiseman’s Monrovia, Indiana (2018), in which citizens of the wealthiest nation in the history of the planet struggle to assert themselves politically even in the most residual ways. Wiseman’s movie is a difficult one to stomach, quite literally; it depicts a populace enslaved by their diets. Eschewing a portrait of many of the typical rituals of a small town—the type of enrichening public workshops often featured in the great Wiseman movies of the past—Wiseman flatly records endless rows of crops being doused in ammonia, red meat getting poked into pizza crusts by dim-looking chefs, two men talking over the counter in the gun shop about their gall stones and, casually, about the debilitating digestive issues of a colleague. The deadening struggle of citizens to assert themselves as citizens in a free-market economy has long been a concern of Wiseman’s. Nevertheless, not since his a few of his ’80s-’90s films—Missile (1988), Central Park (1990), Aspen (1991), and his unreleased The Garden, shot in 1997—has the man’s vision of the irreconcilable forces of market and democracy been as pessimistic as it is in Monrovia. The democracy glimpsed here is but a numbed spasm, standing in stark contrast to the personal and political autonomy exercised by the war-ravaged people of Rojava, that miraculous experiment in democracy that has emerged spontaneously in the Euphrates region—the territory covered in the trilogy of films by Amiralay of which Everyday Life in a Syrian Village is the centre—in recent years. I’ll never forget the committee meetings in Monrovia or their counterparts in Everyday Life..., which are equally as well-intentioned and equally as ineffective. For all the good will in evidence, Monrovia’s are people, Wiseman suggests, who are not self-determining but beholden to the market at every step of the way—from how they structure their communities through to the Gatorades and Coke and Nestle water bottles that line the committee table.

Programming the Wiseman, as with the choice to show several of the films this year, feels like a scream into the void—politically, that is. And indeed, five days before Doclisboa began, the programmers circulated a press release written in response to a pair of provocations from two embassies in Lisbon—the Turkish and the Ukrainian. The former protested pro-Kurdish wording (“annihilation of the Kurdish people,” “Armenian genocide”) in official texts about Yılmaz Güney’s perennially controversial Yol (1982); the latter demanded the removal of Their Own Republic, a competition film about Russian separatists in the contested Donetsk People’s Republic. This missive, arriving in my inbox as I was preparing to make the trip, fired up questions of democratic engagement and autonomy, later colouring my whole perception of what it means to host a sovereign and independent film festival, even in Europe. Doclisboa’s response, implicit in the programming—its outright rejection of the notion of a vague, apolitical series of films offered up for the audience’s delectation—was and is a truly invigorating one.

Posted in CS77, Festivals, Web Only