Transgressions in the Dark Age: The Films of Kim Ki-young and Lee Hwa-si 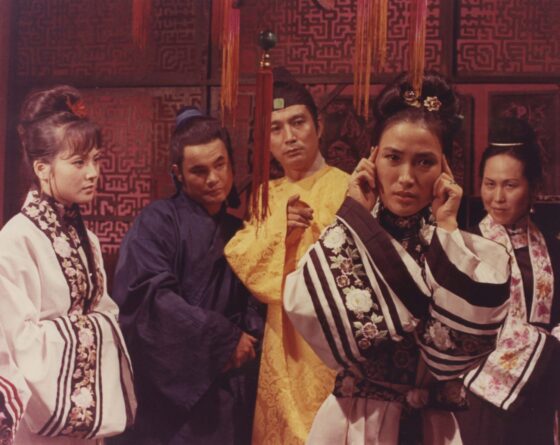 “For me the vast open field of the unknown and the prison existed simultaneously.”
— Kim Hye-soon, “Sorrowtoothpaste Mirrorcream”

After a string of US-funded anti-communist documentaries and neorealist melodramas, Korean director Kim Ki-young entered a new phase of his filmmaking with the wildly successful “Housemaid Trilogy,” comprising The Housemaid (1960) and its remakes Woman of Fire (1971) and Insect Woman (1972). With this tale of a bourgeois family’s undoing at the hands of a seductive interloper, the director located his cinema in the crossfire of gender essentialism, class conflict, and psychosexual idiosyncrasies. In Kim’s universe, men are impotent weaklings with an insatiable need for mothering, women at once insidiously cunning and neurotically desperate for men’s devotion. Until his death in 1998—when he perished in a house fire during the development of his comeback film Diabolical Woman—Kim devoted his filmography to this unending battle of the sexes, and proved himself far more interested in probing the psyches of his women than those of his men.

The twentieth anniversary of Kim Ki-young’s passing coincides with the boiling point of the #MeToo movement in South Korea, where high-profile accusations against celebrities, politicians, and academics have drawn increasing attention to the toxicity of the country’s misogynist hierarchies. (Unsurprisingly, this outpouring of women’s voices has also attracted a backlash: in March, for instance, a number of men burned photos of a Korean singer who told fans that she enjoyed a feminist novel, and attacked her online with threats of violence.) Forthrightly studying women’s transgressive survival mechanisms in a modernizing, capitalist patriarchy, Kim continually placed himself at odds with the government representatives of those hierarchies. The official antagonism directed at Kim extended also to the actress known as his “persona”: Lee Hwa-si, who made seven films with Kim—Transgression (1974), Love of Blood Relations (1976), Ieoh Island (1977), A Woman After a Killer Butterfly (1978), Peasants (1978), Neumi (1979), Woman of Water (1979), and Ban Geum-Ryeon (1981)—before federal pressure and a string of box-office failures contributed to her abrupt departure from South Korea in 1982.

Ironically, Kim and Lee’s fateful meeting occurred just as the “Golden Age” of Korean cinema (1955–1972) under which the director had flourished was giving way to the “Dark Age,” a prolonged period of stagnation signalled by President Park Chung-hee’s establishment of the Fourth Republic. Under the Park regime’s Motion Picture Law, Kim was forced to churn out commissioned movies in compliance with annual quotas, reduced shooting schedules and budgets, and mandatory screenings for the censorship board. Under this production model, Kim’s richly peculiar visions began to exhibit the scars of bowdlerization. While the law allowed for the release of softcore pornographic movies, Kim’s considerably more explicit sex scenes rarely escaped intact; elsewhere, indiscriminate cutting resulted in nonsensical and fractured plots that rush into hasty denouements.

It was in this climate that Kim met Lee (then still going by her birth name of Lee Kyung-duk), when the latter was a university student whose eerie stare, high cheekbones, and sharp jawline earned her admiring comparisons to Faye Dunaway from her classmates. In the months after their first encounter at a Seoul café sometime in 1972 or ’73, Lee received personal acting lessons from the director at Kim’s family home. By all accounts, his teaching methods were bizarre: insisting that “crying when you’re sad and laughing when you’re happy is only the first step in acting,” Kim urged Lee to deliver lines hundreds of times, with each recitation delivered in a drastically different mood and with slightly altered poses.

This kind of fervent artificiality was well suited to the frenetic rhythm and theatrical atmosphere of Kim’s films. But compared to the erratic flailing of Youn Yuh-jung—the star of both Woman of Fire and Insect Woman, and one of the director’s leading actresses prior to the Fourth Republic—Lee employed a more serpentine form of movement: a siren lurking in deep waters, she positions her head at a sharp downward tilt to turn her gaze upward, circles her scene partners in smooth glides, covers her face with the palm of her hand. Like the women in the Housemaid trilogy, Lee’s characters are consumed by the contradictory urges to destroy men and to attain security by becoming their wives or lovers. But while those earlier films (each of which concludes with the housemaid’s murder-suicide) suggest that women’s inability to reconcile these paradoxical impulses accelerates their self-destruction as a social class, Lee’s characters constitute a rebuttal: here, opacity becomes a tool for women’s survival.

Though Lee Hwa-si’s most provocative performances have at least partially fallen victim to censorship—much of the footage from Kim’s films during this period was lost, and the director remained skeptical of later restoration efforts’ ability to undo the severe alterations that were forced upon him—this disfiguration heightens the destabilizing effect of her presence: an otherworldly force arriving in a world already in disarray. In Transgression, the actress plays a female monk who stands naked before young monks to taunt their enforced chastity (“I feel good when I see men hurting”); in A Woman After a Killer Butterfly, she plays a revivified 2,000-year-old skeleton who must eat a man’s raw liver to stay alive (“Even female mosquitoes suck their male partner’s blood”).

The presentation of Lee as a parasite upon the body of an insular society is inverted in Ieoh Island, a bizarre union of environmentalism, utopianism, and Korean shamanism based on the 1974 novel by Lee Cheong-jun. The eponymous island is a submerged, supposedly haunted rock in the Yellow Sea, where legend has it that spirits beckon the men of nearby Parang Island to their deaths, which has resulted in a severe case of male underpopulation. When journalist and Parang native Cheon Nam-suk (Choi Yun-seok) drowns after attempting to stop a boat headed for Ieoh Island, Sunwoo Hyun (Kim Jeong-cheol)—the last man to see Nam-suk, and the only suspect in his murder—heads to the dead man’s hometown to clear his name.

Through the recollections of Nam-suk’s two nameless, grieving lovers—a widow (Kwon Hye-mi) and a bar hostess (Lee Hwa-si) who is later revealed to be Nam-suk’s childhood love Min-Ja—Hyun becomes witness to the islanders’ macabre activities. Because of their scarcity, the men of Parang have become the community’s most precious (and perishable) commodity; accordingly, rampant and open carnality has become the norm for the island’s women, who eagerly seek the men’s seed in order to combat Ieoh’s curse through population growth. Min-ja’s fervent devotion to Nam-suk is thus bound up with the community’s matriarchal utilitarianism: even as she mourns her loss, she seduces Hyun and insists that he take Nam-Suk’s place and give her a child. While Ieoh Island sees Kim offering his characteristic intertwining of sex and death—e.g., Min-ja and Hyun having sex in Nam-suk’s house while Hyun confesses to and vividly describes his murder of the dead man—he also pushes the boundaries to outrageous extremes. In a far more shocking sex scene, which was removed from the film at the time of its original release (and went unseen until 1997), Min-ja, circled by Parang’s female elders, copulates with Nam-suk’s corpse by using a metal rod to keep its penis erect.

An adaptation of Lanling Xiaoxiao Sheng’s Ming Dynasty novel Jin Ping Mei, Ban Geum-Ryeon was actually Kim and Lee’s first film together, but was fated to be their last: shot in 1974, it was banned until 1981 for its explicit sex scenes. The film takes place in the Yuan Dynasty, where wealthy men play mahjong games at which they wager all of their property, including their wives. The charismatic salt merchant Seo Mun-Kyeong (Shin Sung-il) becomes a despised figure among his fellow players for winning one too many additions to his harem; his lucky streak also does not sit well with his wife Wal-Rang (Park Jung-ja), who is compelled to become the grudging mediator between him and his stable of concubines. This already tense situation comes to a head with the arrival of the merchant’s eleventh wife, Ban Geum-Ryeon (Lee Hwa-si). Though instructed by her former husband to kill Seo, Geum-Ryeon instead falls madly in love with her intended victim, and—determined to have him all to herself—begins to manipulate her fellow concubines into killing each other off.

After almost a decade-long back-and-forth battle between Kim and the censors, 40 minutes were ultimately removed from the original cut of Ban Geum-Ryeon. The final result is a pale imitation of Kim’s style, eliding all eroticism and omitting the finer-grained details of character psychology. Shrouded in controversy (“Is it art or is it obscenity?” read the poster accompanying the delayed release), the film failed to attract an audience. The experience was particularly devastating for Lee, whose still-blooming career came under attack for her involvement in Kim’s films. Speaking with Kang Byung-jin of Cine21 in 2007, the actress recalled the intimidation that she endured at the hands of the Korean Central Intelligence Agency: “The KCIA had seen my face and asked [about me]. Luckily, I was [out of town], but I was told that while I was gone they came [to my home] looking for me. A while later, I heard that the KCIA told others not to cast me because of the corruptive allure emanating from my face.” Refusing to abide the government’s harassment, Lee Hwa-si left South Korea for Toronto in 1982, declaring in her official statement, “I am leaving with the desire to forget everything.” She would not return to acting until 2007, when she played a small part in Gina Kim’s Sundance hit Never Forever.

Lee later expressed regret that she and Kim were never able to work together again before his death, but for her, unlike her characters, survival seemed to lie in escape rather than subversion. Yet for all their brilliance, Lee’s women were still constrained by the bonds of female subservience. In the last chapter of Ban Geum-Ryeon, a group of assassins beheads Seo, and the remaining wives convince Geum-Ryeon to follow him into his tomb. To their delight, she complies. Inside the shadowed chamber, Geum-Ryeon lies on the coffin and dreams of embracing Seo in an open field of flowers; she then suddenly awakes to the sight of her beloved’s headless ghost. As they have sex, the camera peers through the translucent spectre to fixate on Geum-Ryeon’s smiling face.

This depiction of erotic transcendence in death recalls the conclusion of Oshima’s In the Realm of the Senses (1976), where coital murder and mutilation are not only the culmination of the mutual obsession of maid and master, but a negation of the social strata that separate them. But while Geum-Ryeon’s act of self-annihilation seems to bear a similar appearance of choice, her exercise of free will does not liberate her from the reality of her social entrapment. Entering the tomb for love, she has become the eternal captive of the man who owned her, within the walls of an impenetrable stone prison.

Special thanks to translators Fanta Sylla and Jodie Moon.