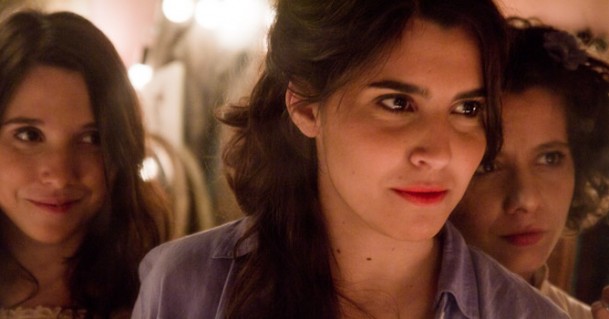 Like most of his colleagues in recent Argentinean cinema, Matías Piñeiro is a graduate from the Universidad del Cine, and, like many of them, works outside the national funding system. Born in 1982 in Buenos Aires, Piñeiro, despite three features (El hombre robado, 2007; Todos mienten, 2009; Viola, 2012) and a 40-minute film commissioned for the Jeonju Digital Project (Rosalinda, 2011), remains overlooked. Perhaps he doesn’t draw much attention because his highly talkative movies occur in an artistic milieu (in other words, in a highly cultured environment), where, if there’s a plot at all, it’s thin or irrelevant. Nobody dies and nothing very dramatic ever happens in a Piñeiro film, which puts him definitively outside of any sort of mainstream—even the festival mainstream, which in recent years has been oriented to the intense or even the gruesome, especially when it comes to Latin American cinema.

Piñeiro’s firm sense of authorship is not grounded in bold gestures. While the complex structures of his films have been mistaken as mannerism, Piñeiro has a very distinctive style: ten seconds is enough to recognize the director’s hand. There is always a group of young women (the presence of men is somehow of secondary importance) involved in rather abstract sentimental dilemmas, occupied with talking, conquering, and cheating. Piñeiro’s characters are slightly detached from the rest of society: even his minor players are from the same age group, and likewise belong to a middle class involved in intimate, homemade art (from ringtones to poorly attended plays); they are all devoted to a kind of bohemian life. Also, they always know each other from frequenting the same haunts, and it’s as if they belong to a sect without knowing it, a secret aristocracy that creates a bond between them that is stronger than love and friendship. These people only relate to each other.

In a way, Piñeiro’s group of actors resembles a college theatre troupe, with the difference being that the quality of the acting is superb. His actresses are always more or less the same, and among them, María Villar has been raised to a sort of indie star. All of Piñeiro’s films were shot with the invaluable aid of cinematographer Fernando Lockett, who contributes elegant, refined lighting and brilliant tracking shots. Piñeiro’s films occur during daylight, with many open-air sequences, and the tone is playful: they are miles away from drama and tragedy, but also from conventional comedy. His films are very free and loose, but at the same time strict in the pace of the bodies, the camera movements, and the precision of the dialogue. Superficially, because of the tone, the presence of the same actors, and the age of the characters, these films might resemble the kind of juvenile art that the late Argentinean film wave is producing—like, for instance, the acclaimed El estudiante (2011)— but they’re moved by a much grander artistic ambition.

Piñeiro’s first feature, El hombre robado, is a comedy of twisted love affairs, featuring characters who work in a history museum from which they steal antiques; it’s somewhat Rohmerian, with a Rivettean undertone. Todos mienten, or Everybody Lies, is rather the opposite: here sentimental complications are less important than political intrigues, secret alliances, and obscure echoes of 19th-century Argentina. Both films reveal Piñeiro’s admiration of writer and politician Domingo Faustino Sarmiento, Argentina’s fourth president and a bête noir for the populist government of the Kirchners, who were already in office when Piñeiro started film school. It would be wrong to say that Piñeiro is a political filmmaker, but his work stands as an attempt to avoid the increasingly authoritarian atmosphere of the Kirchner years by suppressing all links to the omnipresent political reality and looking into a separate world: a world of art and artists, where people live their own lives and are free from the hands of the state, while they secretly long that politics might have developed in an alternative direction. The luminous texture of Piñeiro’s films may well have to do with a desire for Utopia, for a more civilized place for an artist than the country’s present circumstances. The locations in El hombre robado and in Viola (Todos mienten and Rosalinda take place in rarified spaces in the countryside) are undeniably in Buenos Aires, but the spirit comes from somewhere else.

Ghosts and echoes from the past allow Piñeiro to escape from the ordinary and to exclude or weaken the connections with the present, as if his characters are living in a void, or in a remote country. Even if people take buses or care about money, there is no daily life in Piñeiro’s films, because daily life is connected to family, to politics, to social issues, to regular jobs. Piñeiro’s people are slightly askance: they have small jobs, as if making a living is easy, or at least irrelevant. On the other hand, they are deeply concerned with their desires and with reading, acting or making music. Shakespearean comedies fit perfectly into Piñeiro’s system: the featurette Rosalinda, based on As You Like It, and Viola, based on Twelfth Night, are the first two parts of a new project. In both cases, most of the characters are actors who rehearse and play the comedy, but at the same time live their parts: the same body is used by the character in the film and by the character in the play, so the (brilliant) seduction scenes in both plays are also seduction scenes in the films. Rosalinda and Viola are not adaptations in any sense; rather, they explore what film can do with theatre as a subject and as a source, how film can expand, question and reveal theatre.

Meanwhile, the films take Shakesperean promiscuity to the limit: in the end any actor can play any character—including sex changes—as if all the bodies, the names, and all of Shakespeare’s and Piñeiro’s characters are impossible to distinguish. In Viola, María Villar plays a character named Viola who—in principle—has nothing to do with theatre. But then she meets a girl who is acting in a production of Twelfth Night who asks Viola to be her replacement. In the second act of Twelfth Night, Viola disguises herself as a man called Cesario, but in the play within the film he is called Bassanio, a character from The Merchant of Venice. Any multi-talented member of this magic sect can act, write, or even play music, as is clearly shown at the end of Viola. These endless confusions and exchanges continue on and on in the film. Piñeiro has declared that he doesn’t want to make the kind of film where characters’ paths intersect due to the cleverness of the script, but rather one that allows people to live as they want or as they can. But, in that way, all of these individualists living like monads, trying to succeed in love and art, end up mixing into a symbolic orgy, where film and theatre, men and women, music and literature, work and leisure, dating and talking, are molded into a single entity. In film after film, Piñeiro has increasingly perfected this act of magic, and Viola is his most outstanding film to date.