Get Out of the Car: David Cronenberg’s Cosmopolis

Adam Nayman/CS51, Features, From The Magazine 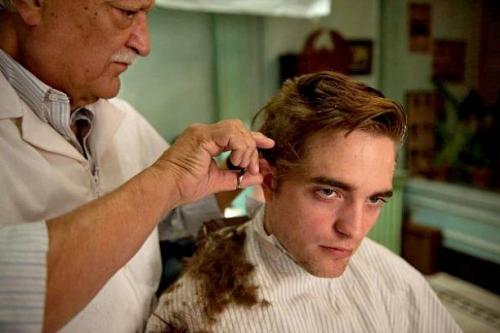 By José Teodoro and Adam Nayman

Cosmopolis opens with a hubcap-level pan across a fleet of white stretch limousines, objects of ostentatious wealth, absurdly oversized and ugly, yet invisible in their anonymity and ubiquity, luxurious yet barely able to move through a teeming city’s daily traffic. A great deal of David Cronenberg’s film, which spans the course of a day—starting in the morning and running into the wee hours—will unfold in one of these limos, one inhabited by 28-year-old Eric Packer (Robert Pattinson), a billionaire on a mundanely quixotic quest for a haircut. The simplicity of his goal and the series of obstacles that will prevent him from reaching it make Cosmopolis a perverse twist on neorealism, one concerning the exact opposite end of the class spectrum—The Bicycle Thief (1948) in reverse on chrome-rimmed wheels.

Seated at his techno-throne in the vehicle’s cork-lined rear end, adorned with armrest consoles and other celestial-looking touch-screens, our white-collar protagonist might as well be the captain of the Starship Enterprise. Packer is working from the car today. Or maybe he’s floating in outer space. He gets a full physical in the car, talking dirty to his sweaty chief of finance (Emily Hampshire) while grunting his way through a prolonged and quite possibly pleasant examination of his prostate. (“It’s asymmetrical,” says the examining physician, a detail drawn faithfully from Don DeLillo’s source novel that also recalls the mutant uteruses of 1988’s Dead Ringers). He has hot, brief sex in the car with his imperious art consultant (Juliette Binoche, a spastic kitten, doing all the heavy lifting here) between discussions about acquiring a Rothko (she wants him to buy a painting; he wants to buy the entire Rothko Chapel and have it moved from Houston to his apartment). As the day goes on, the car will continue to display its versatility by becoming a lecture hall and a toilet. One of the many advisors who drops by the limo asks Packer why they can’t simply meet at the office. Packer, an inveterate riddler, asks him how he knows they’re not in the office. The car, he says, can be everything. Until it’s taken away.

As the hours pass Packer is warned again and again that he needs to heed the yuan’s sudden devaluation, but for some reason he chooses not to act in what would seem his best interests and doesn’t appear in the least concerned about the potentially disastrous fallout. As riotous, rat-swinging protestors occupy the streets, declaring that “a spectre is haunting the world” (that spectre, a hijacked electronic billboard assures us, is capitalism), attempting to provoke some sort of revolution, we get the impression that Packer, whose sheer wealth makes him as good a target for their rage as any, is rather content to sit back and watch everything collapse through tinted windows. The world doesn’t end by the end of Cosmopolis, but it might as well have as far as Packer is concerned. By then we will have witnessed the gradual divestment of Packer’s clothes, his money, his wife, his chief of security, some of his hair, his car, and, maybe, his life. He’s being hunted by one of God’s lonely men, a schlubby double (Paul Giamatti), the only character to speak Packer’s full name aloud, a man who believes the elimination of Eric will grant validation to his otherwise wasted existence.

When compared with certain earlier Cronenberg literary adaptations, Cosmopolis more dutifully follows the trajectory of its source material. Nevertheless, the differences between novel and film are striking enough that we can speak of “Cronenberg’s Cosmopolis” with the same analytical utility as might be applied to “Cronenberg’s Naked Lunch (1991)” or “Cronenberg’s Crash (1996).” The strengths of DeLillo’s Cosmopolis—the zones in which his characteristically twitchy and receptive antennae seem to be functioning at their highest frequency—lay mostly outside of Packer’s roaming office-womb. The novel’s most compelling character is Manhattan, or rather the amorphous swarm of construction workers, tourists, businesswomen, theatregoers, and homeless people that fill Manhattan’s streets, “the great rapacious flow, where the physical will of the city, the ego fevers, the assertions of industry, commerce and crowds shape every anecdotal moment.” DeLillo’s Cosmopolis is a New York novel; Cronenberg’s Cosmopolis is a movie made entirely in meta-space, in that old Cronenbergian meta-space known as Toronto, in this case an almost laughably disguised Toronto. Or, perhaps, an audaciously undisguised Toronto, with the Canon Theatre and Kensington Market in full view. But since Packer can’t exist in Toronto, this isn’t Toronto either. It’s New York-Toronto-No Place seen with eyes wide shut. It’s an eXistenZ-ial journey where the theatre marquee teasingly reads “Stage Play.” It’s Purgatory. It’s Interzone. It’s Videodrome. It’s the River Styx snaking through the jungle in Apocalypse Now (1979) and Packer just can’t keep from getting out of the goddamned boat. It’s (Cronenberg’s) Cosmopolis.

Which isn’t to say that Cronenberg’s transference and ownership of the material is seamless. DeLillo’s prose is notoriously precarious to speak aloud, resistant to the expedient one-take methodology of a filmmaker about to enter his eighth decade. “We’re like people talking,” Packer says during a dinner conversation with his wife, Claire (Sarah Gadon). “Is this how people talk?” Above all it requires room to breathe, a certain amount of negative space. But there are scenes early in Cosmopolis, such as Packer’s exchange with Shiner (an irksome, mannered Jay Baruchel) or his impromptu breakfast date with Claire, where the excess of cuts detracts sorely from the fluidity of DeLillo’s dialogue, whose alternately terse and comic rhythms are so precisely tuned that the cuts could be said to already exist in the language itself. But there are in any case actors in the film, mostly the older, more experienced ones (Binoche, Giamatti, Mathieu Amalric, Samantha Morton) who clearly understand how to bring DeLillo’s text to life and inhabit its compulsive philosophizing. Morton is especially good, playing Packer’s sanguine chief analyst as an only slightly more animated version of her submerged precog in Minority Report (2002). For all of their frequently symbolic functions, DeLillo’s characters do come from somewhere (and Packer, it’s implied, came from a very different socioeconomic background than the one he occupies at the film’s start), so even while uttering Baudrillardian aphorisms it’s worth bearing in mind that there is still an attitude and an active interest underlying it all.

Eventually Packer finds the barber he’s been searching for, an old family friend who used to be a cabbie. He invites Packer’s driver in for some leftover take-out and shoptalk while he snips away at Packer’s locks. This scene, with driver and barber revelling in the listing of best places to eat and pee, of items adorning dashboards, of hours cheerfully logged behind the wheel, is clearly the most free and easy things ever get in Cosmopolis. It’s a wonderful, hugely enjoyable scene, and something of a threshold for Packer, who accepts the loan of a gun the barber just happens to have laying in a drawer before leaving with his much-sought-after haircut unfinished. Like his prostate, his hair is now distinctly asymmetrical. (Actually it looks ridiculous, especially on an actor famed for being so perfectly coiffed). The novel’s Packer, and presumably the film’s Packer, reads science and poetry of the sparest kind. He’s clearly extremely intelligent, if cripplingly, spiritually cloistered within wealth’s cocoon. (The film benefits immensely from Pattinson’s lack of posturing, which might generously be read as Bressonian stoicism.) He has a scene with Morton where they discuss the convergence of man and computer. “People will be absorbed in streams of information,” she says. All this is present in Packer’s mind and ours when he reaches his final destination. So this motif of asymmetry is trying to tell him something he missed, something that will only turn into revelation during his slow showdown with his pursuer in an abandoned building, in a refuse-filled room with a Porta-Potty in one corner—the same sort of ruined Cronenbergian space as in the climaxes to Videodrome (1983), The Fly (1986), and Dead Ringers.

“Do you imagine that I stole ideas from you?” queries Packer of Giamatti’s “Benno Levin,” an alias that’s a conflation of Yale University presidents (Giamatti’s father was also one); the man’s real name, Richard Sheets, implies that he’s a ghost. Either way, he’s something of a construction—a warped mirror image of the younger Packer who it’s implied used to be his boss, and whose master-of-the-universe status he envies and loathes in equal measure, even when it’s clear that it’s eroding before his eyes. While the dualistic design belongs to DeLillo, Cronenberg has done some significant reupholstering, starting with the fact that Giamatti doesn’t appear (save for one shot) until the end of the film: in the book, “Benno Levin” gets his own confessional chapter after the story’s conclusion, indicating his murder of Packer well before the fact. The effect of this small but significant change is to reduce Levin—a paranoid schizophrenic who believes that his genitals are receding into his body and who takes orders from a fungus growing on his foot—to another partner in Packer’s ongoing series of verbal duets, and an even more suspiciously “unreal” figure than the previous parade of characters who really only seem to exist in relation to the protagonist, as sounding boards for his anxieties or manifestations of his fears and desires.

As far as dialogue goes, the scene is very faithful to the book, but it’s also strangely reminiscent of another movie: Barry Lyndon (1975). In that film, the eponymous protagonist (Ryan O’Neal) fires a shot into the ground rather than shoot his own murderous doppelgänger during a climactic duel; here, Packer opts to blow a hole in his hand and wait around for Levin to finish the job. In Kubrick’s film, Barry’s eschewing of “satisfaction” means he’s opting out of the decadence and moral rot of the gilded society he’d so eagerly bought into, and Packer’s gesture is similarly escapist: if his limousine and all its accoutrements were a suit of armour against the indignity of physical incursions, he now rejects them and embraces pain and the way it brings him closer to his own body—the ultimate goal of every Cronenberg character. “You’re already dead,” says Levin as he trains his barrel on Packer’s head. “King’s dead. Royals in their pyjamas eating mutton.” It’s a last rite that’s also a paraphrase of Barry Lyndon’s pithy epilogue: “Good or bad, handsome or ugly, rich or poor, they are all equal now.” The great leveller here is Cronenberg’s camera, which traps them in a temps mort that could be a mercy killing, an assisted suicide, or an image of mutually assured destruction while, pace DeLillo, we wait for the shot to sound.

Posted in CS51, Features, From The Magazine