The Gag of Realism: Nathan for You 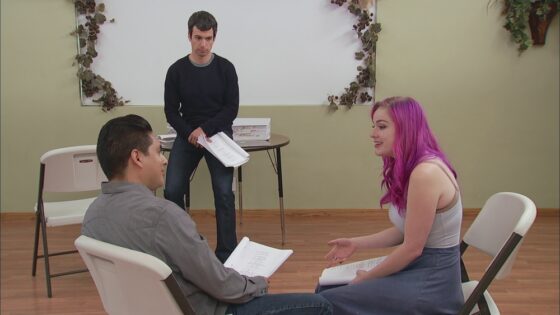 This idea hit me hard while watching the “Smokers Allowed” episode of Nathan Fielder’s Comedy Central series Nathan for You. For the uninitiated, Nathan for You plays like a bizzaro Home and Garden TV reality show. It uses all of the language: the cheesy stock music, the camera wipes, Dutch angles, and, my personal favourite, the host walking towards the camera to make you feel like you’re watching a legitimate business remodelling show. It doesn’t feel like a parody—BUT IT IS.

Fielder plays the host, who is sincere in his desire to help his “clients” (struggling small business proprietors), but who seems equally concerned with his desire to find friendship and meaning in his work. This creates the ongoing narrative throughout the past three seasons. Nathan for You is so funny that it has repeatedly made me pause the television so that I could cry. It actually hurts, and that’s because of what it is doing to my expectations. The only difference between Nathan for You and Beyond the Tank is Nathan Fielder. He is incapable of performing his duty as a straight-up host. The character of “Nathan Fielder” is oblivious to the idea of the separation between “acting it up” and real life. He can’t tell the difference and neither can we, so we buy into the whole show. The key to all of this is Fielder’s unbending commitment to the idea that he is making a reality TV show. The graduate of one of “Canada’s top business schools with really good grades,” Fielder is truly a national treasure. He has somehow melded Jacques Tati and Mark Cuban.

It’s no surprise that the first two seasons of Nathan for You produced massive viral hits. The first global phenomenon showed a home video of a heroic pig saving a goat from a pond at a petting zoo. It was flawless and looked completely real. Newscasters all over the world played the clip and cried, “We should all be like this hero pig!” But for months Fielder was silent. This could have been the best advertising for the show ever, but instead of coming clean, he let it ride out all the way until the episode, “Santa/Petting Zoo,” aired. Only then did he expose the video as one of the most elaborate productions imaginable, involving scuba divers, stunt pigs, and even ADR of the “cameraman.” The episode is incredible because it not only shows how hard it is to make something fake look real, but it also shows the discipline on Fielder’s part. He won’t let the show’s “contestant” advertise the video (even though that was the purpose of the video) because he doesn’t want people to think it’s fake. Fielder’s cherishing of realism is in itself the source of the humour.

The next viral hit was Season Two’s episode “Dumb Starbucks.” Fielder created a coffee shop in Los Angeles identical to Starbucks down to its logo and avoided copyright infringements because he put the word “Dumb” in front, legally making it a parody. (The bulk of the episode shows him hilariously trying to establish legitimacy as a parody artist; indeed, it can be argued that at his best Fielder is creating conceptual art.) People went nuts. Lines stretched around the block and cups were sold on eBay for hundreds of dollars. Though Fielder was reluctant to take credit—people thought it was Banksy—eventually it came out he was behind the whole thing, but instead of priding himself on his intellectual humour, he released a video claiming its sincerity. The video plays like a local TV ad for a coffee shop. The style is directly ripped from local TV commercial language, but again Fielder is not playing it for parody. He even says, “This is no bit or joke, this is a real business I plan to get rich from.” By playing it for realism and not flinching, it’s so much funnier. He created something genuinely fake.

All of this brings me to Fielder’s masterpiece, Season Three’s “Smokers Allowed.” As the owner of a dive bar claims anti-smoking laws have led to a drop in business, this episode focuses on devising a plan to permit her patrons to light up inside. It turns out that the only way you can smoke inside in the state of California is if one is participating in a theatrical production. So Fielder puts two theatre chairs and a red curtain in the corner of the bar and gives two tickets away to the new play Smokers Allowed. Suddenly all of the bar’s patrons become actors. The night is completely normal. After all, these “actors” are just people in a bar doing what they would normally do. Eventually Fielder closes the curtains and ends the “show.” The owner is relieved because she made extra money and Fielder is happy because she’s happy. But to his surprise the audience loved it as theatre. They felt it captured a sense of realism (IT WAS REAL!) and loved its avant-garde nature. Fielder shows it to some academic types who agree on camera.

This is where Fielder reaches new heights. By realizing he has potentially stumbled onto a hit play, he becomes obsessed. Instead of embracing the idea of allowing people to just sit and be a fly on the wall, with new “actors” every night, and smoke to their hearts content, Fielder, the character, is convinced it is not the concept that is successful but the content. People don’t want to watch realism—they want to watch realism to PERFECTION!

He spends weeks transcribing the conversations and choreographing the movements of every person in the bar from that one night. He casts the entire play with actors and has them rehearse the scenes and movements like clockwork, again going to lengths never before seen to recreate the real. The whole process is incredible to watch, but the highlight goes to getting “the couple” to really feel like they are in love. Fielder momentarily takes the place of the “boyfriend” character to direct the scene from within. He stares his “girlfriend” in the eyes and has her repeat “I love you” over and over. It starts out like a teacher mercifully forcing a line reading and becomes Nathan wanting to be loved, until the actress notices a tear roll down Fielder’s face. On the night of the performance Fielder brings a larger audience to witness his creation. When the curtains open, they see a bar. It is exactly what the first audience members saw only this time it’s fake.

Here is where it gets confusing. All this new audience sees in this “play” is a normal night at a bar, and they react accordingly. What the audience at home is watching is something far greater, but not that much different. We are watching a painstakingy exact replica of normalcy. Fielder shows us this in split screen: from the man showing off a skateboard to a selfie in the corner (the climax of the “action”), it’s all exactly as it happened that first, extremely uneventful night. The level of detail and control is exactly like the Royal Garden restaurant scene in Tati’s PlayTime (1967). In Tati’s film, the hot new restaurant is so eager to open that they do so while literally still building the place. The humour lies in the management’s attempts to hide every mishap from the patrons. It’s opening night and the last thing they want is people to see the real restaurant. Tati derives his humour from the meticulous nature and beauty of the gag; it isn’t until everyone sees the inner workings of the restaurant—it literally falls apart—that they have a good time. Fielder is working in the same way. In “Smokers Allowed,” Fielder derives humour from a meticulous re-creation of reality. This in turn becomes the gag. The precision and exactitude make it even funnier. In the end, all Fielder did was recreate something real perfectly. It’s only because we know, just like the people in Tati’s restaurant, how much work went into that recreation that it’s hilarious. The age-old question “Is it real or fake?” just got more complicated.