By James Lattimer In CS76, Currency, From The Magazine 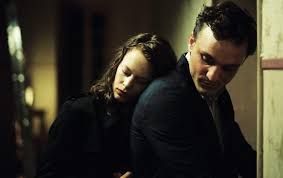 Christian Petzold’s progressive drift away from realism gathers pace in Transit, another melodrama of impossibility and despair that unfolds in a hyper-constructed amalgam of past and present as unstable as it is seamless. Yet the deliberately unresolved tension between ’40s Marseille and today is hardly the only element of slippage in the German director’s typically astute adaptation of Anna Seghers’ 1944 novel of the same name, as frictions of all kinds abound: between literature and cinema; between her ideas and his; between the explicit and the unsaid.

As Transit begins, the police are already going door-to-door in Paris, yet Georg (Franz Rogowski) has no plans to leave, unlike his friend Paul (Sebastian Hülk), who is set to depart the next day. Paul asks Georg to deliver two letters to a writer named Weidel ensconced in a nearby hotel, but all Georg discovers there is an anxious hotelier, a bathroom smeared in blood, and the belongings Weidel left behind, including a typed manuscript. Upon leaving the hotel, Georg is forced to flee, ending up on a train to Marseille with Heinz, an injured comrade who doesn’t survive the journey.

The trip is long enough for Georg to read the two letters and the entire manuscript, although their precise content is only revealed by the narrator (Matthias Brandt), who suddenly appears in voiceover and will increasingly intervene as the story unfolds. One letter is from the Embassy of Mexico, explaining that nothing stands in the way of Weidel’s planned emigration; the other is a note from his wife imploring him to join her in Marseille so they can leave together. And the manuscript is a story of chaos and endless complication couched in perversely soothing language, with a character oddly reminiscent of Georg himself.

Once in Marseille, Georg visits Heinz’s wife Melissa (Maryam Zaree) to inform her of her husband’s death, befriending her young son Driss (Lilien Batman) in the process, then heads to the overcrowded Mexican consulate to hand over Weidel’s letters and manuscript. But the staff there take him for the dead writer, for whom passage to Mexico has already been organized—a misunderstanding which Georg understandably doesn’t try to clear up, given that the occupying forces will soon overrun the city.

Now all he must do is secure a transit visa from the American embassy, although when Driss falls ill and Melissa asks him to find a doctor, he comes across a German pediatrician named Richard (Godehard Giese), who happens to be involved with Weidel’s wife Marie (Paula Beer), the same dark-haired, almost wraith-like woman with whom Georg has already exchanged fleeting glances throughout Marseille—on the Canabière, at the consulate, at the Mont Ventoux pizzeria.

Although the talk of invading forces, transit visas, and departing ships appears to place the action in the early ’40s, it unfolds within a setting that combines elements of old and new such that neither dominates. The present is more visible in the exterior scenes, largely in the form of the contemporary cars and buildings Petzold makes no attempt to conceal, while the past tends to come to the fore in the interiors and the judiciously chosen period markers placed within them, with today’s ongoing love affair with retro stylings helping to gently blur the boundary. Yet every time a degree of temporary equilibrium appears to have been reached, some canny anachronism is always introduced to disturb the rhythm.

For example, as Georg is driven to the train for Marseille through modern streets in a modern van, there is still talk of the four days it takes to reach the city by train. Later, the waiting room of the old building that houses the Mexican consulate has a prominently placed high-definition screen, even as the consul’s office is period-perfect. Other such gestures are more strident, even brazen, such as when Georg and a despairing acquaintance (Barbara Auer) stroll around and discuss the architecture of the Museum of European and Mediterranean Civilizations that was only completed in 2013, or when the narrator, apparently speaking from the past, suddenly references Dawn of the Dead (1978). Yet Petzold is just as careful to prevent the perpetual temporal instability from becoming jarring or over-demonstrative, either by allowing scenes to play out long enough that they transcend questions of time, or restricting the focus to those things not directly affected by it, whether light and surfaces or gestures and faces.

One way of interpreting the constant back and forth between past and present is to see it as an attempt to reference the very process of literary adaptation, a reading given credence by Petzold’s other self-reflexive flourishes. The various glimpses of Weidel’s typed pages indicate that they are none other than Seghers’ novel, with Georg even quoting directly on occasion, thus slyly mirroring the influence of the original text on the film. The presence of the offscreen narrator, who is eventually revealed to be the owner of the Mont Ventoux, equally conveys the tension inherent to adapting a book into a film. Whenever he articulates feelings and ideas not otherwise visible, he’s not just providing extra context, fleshing out the characters or making their uncertainty tangible, but also alluding to the fundamental differences between the two media, between how they show and how they tell.

If any contemporary adaptation of a historical work is an innate fusion of past and present perspectives, Transit is about making this idea visible, about seeing what happens when a work that is the product of a specific place at a specific time is returned there over 70 years later: its ideas are the same, but they echo differently in a new context, in a changed city. In this sense, the film’s closest recent cousin is Ruth Beckermann’s The Dreamed Ones (2016), another exercise in returning a past text to the present and capturing the resultant sparks given off. But Petzold goes one step further, realizing perhaps that the process of transposition must transform the text in turn. Numerous secondary characters are thus removed or relegated to bit parts, while the novel’s focus on the administrative complexities of leaving Marseille is streamlined considerably, allowing the elements of classic melodrama to come to the fore—those elements which have also underpinned Petzold’s own recent work.

The scene in which Georg sings a shy lullaby to Driss after repairing his radio may be entirely of Petzold’s invention, but serves as a wonderful bridging mechanism between his own work and that of Seghers. An entirely constructed moment of affect like those upon which Phoenix (2014) hinges on the one hand, an evocation of the melancholy of rootlessness which pervades the novel on the other; it’s perhaps only in the song that a parade of disparate creatures can all find their way home. Petzold’s oeuvre also looms large in the figure of Marie, whose costumes, hair, and body language recall Nelly Lenz, Nina Hoss, and thus all the other women from his films who search for something they won’t find.

And it’s a few lines of dialogue spoken by Marie, which again come from the filmmaker rather than the author, which serve as just one example of the specific way Petzold seeks to reference the current political climate by pulling Seghers’ novel into the present. If the parallels between the people streaming out of Europe in the ’40s and those streaming into it today are obvious, the decision to let them hang in the air, percolate, and find new, unexpected expression is not, particularly in light of the flood of images and words that have tried to capture the current “crisis.” As has always been the case with Petzold, the oblique and the ambiguous ultimately prove far more devastating than the overt and the direct: “They say those who were left never forget. But it’s not true. They have the sweet, sad songs. Pity is with them. Those who leave, no one is with them. They have no songs.”