The Unkindest Cut of All: Hitchcock 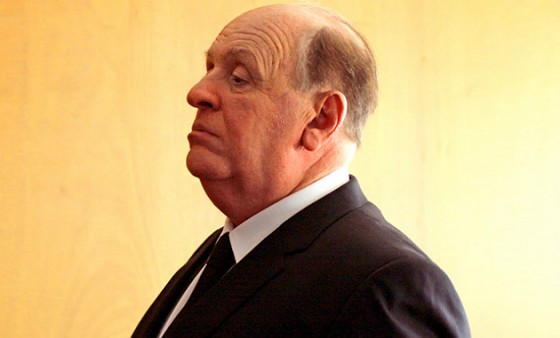 The murder of Marion Crane in Alfred Hitchcock’s Psycho (1960) remains one of the cinema’s most traumatic turning points in part because it so completely refutes causality. Only the most obtuse (or misogynist) of moral misers could regard the shower murder as any kind of karmic consequence of Marion’s theft from her employer, much less of her love affair with a hunky, still-married hardware store owner. (Indeed, as many have pointed out, the horror is exacerbated by irony: Marion is murdered immediately after she resolves to give back the money.) Psycho’s genius owes something to how it violates its initial deft semblance of order with a sudden act of lacerating violence that, in one brutal stroke—or rather dozens in rapid succession—severs the spectator from the traditional comforts of narrative. Though Hitchcock had always toyed with audience expectations, Marion’s shocking demise was his most spectacularly perverse violation of his tacit contract with the viewer; even here, in the midst of a Hollywood entertainment, Hitch bloodily reminds us that our destinies are governed by pure chance.

No such conception of chance or collapsed order, however, plays into the tepid teleology of Hitchcock, which is at once reprehensibly tidy in its recreation of Psycho’s behind-the-scenes drama and stupefyingly incoherent in tone. Directed by Sacha Gervasi (who previously helmed the very likable rock doc Anvil!: The Story of Anvil) and scripted by John J. McLaughlin, who ostensibly based his screenplay on Stephen Rebello’s Alfred Hitchcock and the Making of Psycho, Hitchcock blends fact, rumour, conjecture, fantasy, fiction, pop psychoanalysis and sheer screenwriting laziness into a gaudy, risible mishmash. It is by turns a let’s-put-on-a-show movie about a shrewd creative genius pulling off an artistic coup despite the interference of dunderheaded studio fat cats; a gross slander of said creative genius, playing his supposed psychosexual hang-ups for the cheapest sort of camp (cue wry Danny Elfman score); and an affectionate, feel-good story of marital reconciliation. And while it does laudably attempt to raise awareness of the vital role played by Alma Reville, Hitchcock’s wife and collaborator, in the shaping of Hitchcock’s films (she often settled for a simple “continuity” credit, though she’s said to have written the final draft of nearly every Hitchcock screenplay), one could argue that the flagrant falsity of the whole of Hitchcock severely undercuts the film’s one laudable attempt at truth-telling. (Helen Mirren, who gives a dependably canny and multi-hued performance as Alma, is essentially the only actor permitted to give anything like a layered reading of her historical model; even such evidently talented co-stars as Michael Stuhlbarg, who at least imbues Hitchcock’s agent and future MCA head Lew Wasserman with an appealing urgency, are largely unable to rise above the level of caricature.)

Relentlessly trading in thick blobs of portent, needless expository dialogue, and a relentless foregrounding of its paltry subtext, Hitchcock feels artificial from the get-go. (An early scene finds the Hitchcocks on the red carpet for the Chicago premiere of North By Northwest [1959] when some fresh-faced journo from Central Casting asks the master of suspense if, now that he’s 60, he shouldn’t quit while he’s ahead. Whippersnapper!) There’s nothing in the way of witty banter or sly suggestion that are the hallmarks of good Hitchcock, but then Hitchcock seems oblivious to the very notion of a good Hitchcock. Embodied by Anthony Hopkins, a fat suit, and rubbery facial prosthetics that make his head look like a swollen testicle, this Hitch is another entry on Hopkins’ list of famous dead men defamed (cf. Nixon [1995], Surviving Picasso [1996]). He mostly comes off as a pest and pervert, poking Alma in the head during her slumber, indulging in wee-hours binging from an open fridge, peeping at various skirt-wearing passersby through the Venetian blinds of his Paramount office, leering at his female stars through his own private peephole, salivating over glossy headshots of some of his favourite blondes in his study. (Cinema is voyeurism, don’tcha know.)

However unimaginatively rendered, all of this sleaze does correspond with a certain portrait of the historical Hitchcock conjured by his biographer Donald Spoto in no less than three muckraking biographies. But the merely tawdry soon becomes utterly preposterous with the spectral appearances of Ed Gein (gravel-voiced Michael Wincott)—the rural Wisconsin serial killer who served as the loosest sort of inspiration for the Norman Bates in Robert Bloch’s source novel, and served as almost no basis whatsoever for the Norman so brilliantly played by Anthony Perkins in Hitchcock’s film—in Hitchcock’s dreams and fantasies. (We see Hitch on the couch with Gein as his fantasy psychoanalyst, Hitch having dreams where he witnesses Gein’s crimes, etc.) The idea that Hitchcock identified closely with Gein, (who was not exactly Cary Grant) because of his own murderous fantasies of revenge on producers, or even Alma, is psycho-portraiture at its most fatuous, if not downright nonsensical.

But perhaps what’s most irksome about Hitchcock is its failure to convey very much that’s interesting about the filmmaking process. At best, Hitchcock’s scenes of casting coups (Perkins is sexually ambivalent? Ah, “duality!”), editing room discussions and on-set negotiations plays like a cursory perusal of the Hitchcock Wikipedia page. Elsewhere, the elision of certain key players in the story of Psycho’s creation—e.g., body-double Marli Renfro or, you know, Universal Studios—not only indicates the degree to which legal obstacles forced the filmmakers to fudge their history, but further attests to how uninterested Hitchcock is in history at all. For a film purporting to recount the making of one of greatest movies of all time, there is almost nothing to learn about great moviemaking from watching Hitchcock; what one can learn is how the juicy complexity of film production and film history can be insultingly simplified and streamlined (complete with forced and unconvincing happy ending) to suit filmmaker convenience. One hopes that the actual Hitch’s contemporary currency is still such to ensure that Hitchcock isn’t left to serve as the final cut of the story of Psycho’s genesis in the popular consciousness. While the film is far too blunt to penetrate the surface of its subject, its inanity still gets under your skin.