By Quintin In CS64, Currency, From The Magazine 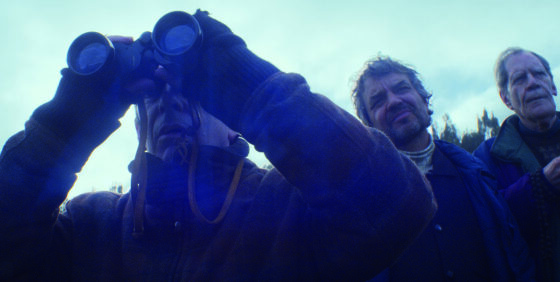 The Club, the fourth feature by Pablo Larraín, is set in a small town in coastal Chile. There’s an unassuming house in this town that the Catholic Church runs as an open prison for priests who have committed serious crimes, sheltering them from the prying eyes of society. One priest (Father Vidal) is a proud pedophile; a second (Father Silva) takes satisfaction that he used to aid the military in torturing prisoners; a third (Father Ortega) traded babies; and a fourth (Father Ramírez) is too senile to remember his sins. There is also a nun (Sister Mónica) who is not really a nun, and who used to beat her adopted daughter. In their spare time, the priests train Rayo, a greyhound that competes at the local racetrack. In other word, except for the dog, the house gathers together the scum of the earth.

One day, another pedophile (Father Lazcano) joins the club, but he’s being tailed by Sandokan, a homeless wreck whom he abused years prior. Confronted by his past, Father Lazcano shoots himself; then a new character, Father García, arrives. His mission, on its surface, is to find out what happened to Father Lazcano, but more than an investigator, Father García is an inquisitor, Soviet-style. He knows exactly what everyone has done, but he wants to hear them confess. Not like the way people confess in church, but the way they do it in the police station. Father García is there to humiliate and to punish. Which is precisely what Pablo Larraín has always done to his characters.

Born in Chile in 1976 to an upper-class family linked to the Pinochet regime (his father is a right-wing politician), Larraín prefers to deal in his films with the low and middle classes, whom he strongly despises. If there’s a common thread running through his cinematographic output, it’s that the problem of contemporary Chilean society is not, as usually assumed, that it suffered a dictatorship for almost 20 years, during which time thousands of citizens were murdered, tortured, and disappeared, all kinds of censorship and repression was exerted, and people couldn’t leave their homes at night because of the curfew. No, for Larraín the true problem is that Chileans deserve their fate because they secretly liked to be humiliated and destroyed by the barbarians, as they thought that they were not strong enough to rebel against them.

Larraín attacks the poor from the left and from the right. His films are made to condemn, but not to condemn injustice, abuse, or crime, rather people, as if Judgment Day has come. Tony Manero, the main character of his celebrated first feature, is a pure Larraín creation. A thief, an assassin, but also a pathetic John Travolta impersonator, he abuses his dancers, who are willing to be martyred by Manero, like Manero himself is humiliated by his own ideology: being, like Pinochet, an imitator of the Empire, he acts exactly like him. In that sense it’s hard to draw a line between the oppressor and the oppressed: they ooze from the same mud. Maybe the oppressed are even worse, because they act against their true interests.

If Tony Manero (2008) isn’t enough to show Larraín’s point of view, Post Mortem (2010) underlines it. Sordid to the point of absurdity, the film deals with a civil servant who works at the state morgue and takes advantage of the coup d’état to murder his cheating lover. Chock-full of corpses and autopsy scenes—even one of Allende, which in no way serves the story, but only makes the film even uglier—Post Mortem shows that even if the employees in the morgue were fervent supporters of Allende, and also demanded arms for the people before the coup, afterwards they acted like sheep in service of the regime. Again, Chileans deserved Pinochet and liked him, says Larraín: after all, the protagonist is a killer like him, exactly like Tony Manero. There is not one likeable character in Post Mortem, no scene to be enjoyed, no single moment of relief. The filmmaker-inquisitor never shows a hint of tolerance or forgiveness. On the contrary, his creatures are constantly to blame, and the film serves as the purgatory to their faults. And purgatory is what Father García wants the residence to be in The Club.

Larraín’s third feature, No (2012), is lighter, maybe because it’s set in the advertising milieu, where the protagonist René Saavedra (Gael García Bernal) is a key figure in fashioning the anti-Pinochet campaign for the 1988 referendum. This time, Larraín rewrites his thesis in a more abstract and general way: the outcome of the referendum was not due to the majority being fed up by Pinochet, his government, and his atrocities, but because the voters were persuaded to vote “No” by the cleverness and modernity of a campaign that could be used to sell any kind of goods. This time, humiliation is not shown through people genuflecting before the powerful, but by revealing that citizens didn’t have the true will to get rid of the dictator, and could be easily manipulated in one way or the other. For Larraín, Chile has no History, only small-time anecdotes, souvenirs like the stock material of the 1988 campaign that makes up the core of No. In the end, the 17 years of dictatorship and the 25 of democracy that succeeded them were more or less the same thing, because Chile lives in sin.

The Club seems a logical development of Larraín’s religious approach to filmmaking, finally addressing his key subject in a milieu where sin and repentance are discussed on a daily basis. Nothing better suits this purpose than taking the issue to an extreme: a bunch of sinners who are at the same time priests serves as a perfect example of the abomination of mankind. These monsters are even more of an excuse for exposing ideas than in Larraín’s previous films, acting as theatrical abstractions used to utter sermons. Like all of Larraín’s oeuvre, The Club is strongly dependent on art direction, to the point of being distracting in almost every scene. Like Peter Greenaway, a filmmaker to whom Larraín resembles in his taste for ostentatious cruelty and sordidness, the film proceeds as a series of arbitrary events that, after the death of the movie’s sole nice character (Rayo, the dog), results in a compromise between Father García and the rest of the troupe.

There is no apparent surrogate for Larraín in Tony Manero or Post Mortem, although he is close to the manipulating publicist in No. But it’s striking how much of the filmmaker can be read into Father García. As the inmates point out, Father García hails from a different social milieu: he wears good clothes, has an American Express card, and is never confronted with the destiny of ordinary people nor the true needs of the poor. As a Vatican bureaucrat, he deals with with rules made by others. He comes and goes, without really solving anything, leaving things unchanged. He is as impotent to modify reality as films are, but he will continue with his life and his function when he closes the case. Father García and his righteousness are not to be identified with: he is an obsessed moralist, a persecutor, and, finally, a coward who cannot complete his mission, which is to suppress evil. He’s like Larraín, who makes one film after another devoted to showing that the world is doomed and that souls are rotten, without any real change possible, only a petty compromise. That’s why The Club has all the traces of that old device used by inquisitors and Stalinists alike: the autocritique.