Blake Williams/CS53, Currency, From The Magazine 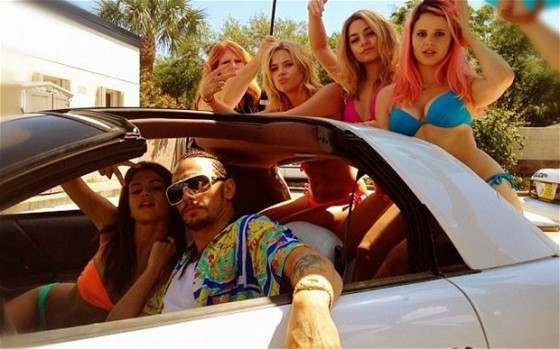 Only three years later, Harmony Korine has essentially remade Trash Humpers. In so doing, he has also made a few changes, replacing the cretinous geezers, low-grade VHS presentation, and cacophonous sound mix with heavenly creatures, high-def radiance and candy-pop shellac. If that sounds like an altogether distinct and wholly unrelated film, it’s supposed to. The surface of Spring Breakers counters so many of the descriptors that have affixed themselves to Korine’s reputation (especially after Humpers) that it seems to serve as ballast. It turns out, though, that this is more of a complement than a corrective. Beneath its resplendent exterior is a foundation just as defiled as anything in his previous film, and with just as much disillusionment about the spectre of the American dream.

But make no mistake: Spring Breakers is an immensely pleasurable, often euphoric, spectacle. Korine has said he wanted the film to feel like a Britney Spears video by way of Gaspar Noé (he even enlisted Noé’s DP Benoît Debie), and the result is unquestionably that: a glitter-punk fairy tale of circa-Y2K pop culture. The central players are embodiments of this theme: Selena Gomez and Vanessa Hudgens, both late ’00s Disney Channel prodigies and practically the spawn of Spears, are joined by former Days of Our Lives actress Ashley Benson and Korine’s wife Rachel. The fab four decide they’ve had it with their college hellhole and it’s time for some “spring break, bitches,” so they suit up in pink balaclavas (evoking Russian feminist collective Pussy Riot, a resemblance Korine calls “an awesome coincidence”), hold up a diner, and hightail it to Florida. Spring break, bitches; spring break forever.

At the time of writing, Spring Breakers has had only a couple of festival screenings (Venice and Toronto); we’ve yet to see how general audiences will react. Korine says he made the film for Selena Gomez fans as much as anyone, and that it’s “an exploration of the poetry that’s in their world.” Behold the metrics of Generation 2K12: slo-mo bouncing C-cups, cans of beer ejaculating onto girls’ faces, vomit projected into the ocean, breezy synths and heavy dubstep drops, close-ups of gyrating torsos, and fellatio performed on patriotic popsicles. All this can be seen and heard in the film’s opening minutes—the first of many music video-esque sequences not at all unlike those that used to populate TRL’s daily Top Ten—trying to seduce us with the same hedonistic fantasy of Florida that drives our four main girls. But it doesn’t totally work. Despite the ecstatic presentation, what we’re seeing is also fairly noxious, especially if this scene is being presented as a vision of utopia.

Typical of Korine’s utopias, it’s simultaneously beautiful and pathetic, and virtually indistinguishable from a dystopia. His characters’ quixotic beliefs that these manufactured utopias are imperishable or possibly imperishable are the source of an underlying pathos in all of his films. It can be felt in all his token religious nuts (represented in Spring Breakers by Gomez’s “Faith”), as well as in his “beautiful losers” (to borrow the title of the 2007 doc that featured Korine). But it’s also there in his representation of celebrity culture, from the inadequate impersonators in Mister Lonely (2007) to fallen icons like Britney Spears. There’s even his recent casting of Hollywood enigma Val Kilmer, whose “as himself” role as a motivational speaker in Lotus Community Workshop (Korine’s medium-length contribution to the three-part omnibus The Fourth Dimension) functions more as autocritique than anything else (not to mention that Kilmer’s exegesis of The Fourth Dimension—“a kind of world like cotton candy almost; it’s just light and fluffy, and there’s no more past, no more future. No more convicts, no more ‘out of work,’ no more bad times”—would be an apt outline of Korine’s St. Petersburg).

And then there’s James Franco. The former Freaks and Geeks freak’s participation in Spring Breakers ended up being quite the coup for Korine. Just as Werner Herzog did for Julien Donkey-Boy (1999), Franco (who has a much wider, more diverse audience than any of the Disney girls) automatically boosts the film’s visibility without dulling its quasi-underground sensibility. Those familiar with his dabbling in the art world couldn’t have been too surprised to see him join forces with Korine, whose influence is palpable in, for example, Franco’s video Dicknose in Paris (2008), a piece in which the actor wears a prosthetic schlong on his face while he rambles on about—among other things—how Wes Anderson is his favourite director. His artist persona is only part of his well-documented metamorphosis into a self-consciously narcissistic provocateur, and his portrayal of gangsta/rapper/drug dealer Alien in Spring Breakers is the best example yet of Korine’s mindful convergence of his actors’ public personas with the roles they play in his narratives.

Functioning as a harbinger for Spring Breakers’ violent second half, Alien’s arrival gives the film some grounding just as it’s beginning to hydroplane on its own sweat. He makes his first appearance shortly after the end of the first act, rapping on stage with St. Petersburg local Dangeruss (that guy who raps about forks). Dangeruss is one of several figures on whom Franco and Korine drew to create Alien, two others being YouTube rapper RiFF RaFF (also, according to his Twitter bio, “#1 SLEEP WALKiNG BOOTY GRABBER iN SWEDEN”) and, naturally, Kevin Federline. When the four girls get busted for doing coke at a party, it’s Alien who shows up at their hearing, ready and willing to bail them out, sparing them a premature exit from Eden (hoping, no doubt, for some tit for tat). It’s no accident that he arrives at the precise moment when money becomes essential to the girls’ freedom; no heist would have rescued them from this scenario.

Unlike them, Alien’s utopia is constructed from dollar signs, a fact made clear from his unabashedly vain spiel about his possessions to Candy (Hudgens) and Brit (Benson): “This is my fuckin’ dream, y’all! All this shit! Look at my shit! I got shorts, every fuckin’ colour!” This is an example of the kind of monologue-as-worldview that Korine loves to insert in his films, yet it’s not Spring Breakers’ defining thesis statement. That comes quite a bit earlier, before the girls first devise their plans for escape, when Faith makes the following plea to her friends: “I’m so tired of seeing the same things every single day. Everybody’s miserable here because everybody sees the same things. They wake up in the same bed; the same houses; the same depressing streetlights.” If this sounds vaguely familiar, it’s because Faith’s monologue is essentially a direct lift of Hervé’s rant during a late-night drive in Trash Humpers (“I can smell how all these people are just trapped in their lives, their day-to-day lives. They don’t see much”). This is not so much a matter of Korine rehashing past material as it is a deliberate attempt at correlating the four main characters in both films.

Yet while the humpers are necessarily static, Korine will likely be criticized for not allowing his breakers to develop. To briefly compare Spring Breakers to Henry Levin’s 1960 Metrocolor teen comedy Where the Boys Are (the only other decent spring break film), there’s a common, ironic chauvinism among them that’s discernable from their opening sequences. Levin’s film begins, not with bare-breasted blondes or implied sexual acts, but with a hokey male voiceover delivering an exposition of the shenanigans that go on in Ft. Lauderdale come “Easter vacation”: “The boys come to soak up the sun and a few carloads of beer; the girls come, very simply, because this is where the boys are!” Then we meet Levin’s leading ladies, who are in class listening to a dated lecture about “Interpersonal Relationships.” The head of the pack, Merritt (Dolores Hart), begins ranting to the professor about how girls must “play house” before marriage, then spends the rest of the movie becoming increasingly abstinent. In fact, all of the girls, in their own ways, end up just as naïve as the girls in Spring Breakers, but Levin lowers them there in service of his larger point about female promiscuity at the onset of the sexual revolution.

Korine, who is far more interested in presenting concepts and creating images than in drawing up dynamic characters (Alien, naturally, being the anomaly), is content to have the girls in Spring Breakers be little more than ciphers, to the extent that when Gomez and Rachel Korine leave the film entirely for the last act, their absence barely registers. Even when we first meet Candy and Brit, it’s in a classroom filled with computer screens that transform the space into an impromptu Dan Flavin installation. The girls, fighting back their ennui by drawing penises and scheming their spring vacation, are a secondary presence to the ambient glow of the pastel blues, greens, pinks, and oranges. In a film about surface pleasure, this is arguably the point. Korine is, after all, drawing from the vernacular of the avant-garde more than from any conventional storytelling tradition. So while he hasn’t matured much as a director, Spring Breakers should nevertheless be lauded as a boldly superficial film, one that understands the pertinence of an alluring image, and the consequences of valuing only that.