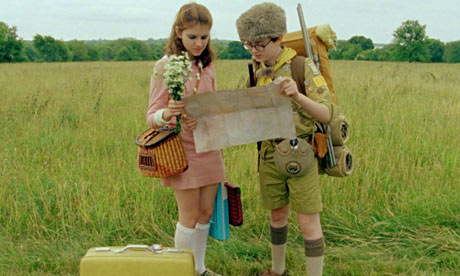 Kubrick has his monolith, Lynch his voyeur peering through the closet door, Spielberg his countless shots of faces wide-eyed and slack-jawed, awash in the wonder of some off-screen astonishment, all images that singularly apprehend broad authorial sensibilities. It’s been hard to narrow in on any one characteristic image that defines the cinema of Wes Anderson, and so to on the precise nature of his rather obviously fashioned sensibility. His films largely work as shabby-chic dioramas, decorated in the fabrics and textures that have come to define what has passed as an aesthetic—the self-consciously retro fashions, the brightly coded, exactingly manicured mise en scène, the neatly deployed pop music and orchestral maneuvering by Mark Mothersbaugh, and all the other markers of “preciousness”/“quirkiness”/“twee-ness” that prove equally endearing and estranging. In all this matting upholstery, it’s hard to get a bead on what exactly Wes Anderson’s films are, outside of exercises in meticulousness and style qua style. Moonrise Kingdom, at last, offers this image, and is Anderson’s best film to date.

Adolescent paramours played by Jared Gilman and Kara Hayward have slipped into the thickets that by-and-large define their mid-’60s New England island community. He has absconded from the tent of his Khaki Scouts Camp, she from her family’s estate, Summer’s End (a lighthouse retrofitted in the Andersonian style). After living off the land for a few blissful days, like dorkier versions of the sweetly sociopathic Sheen and Spacek in Badlands (1973) or Godard’s doomed on-the-lam lovers in Pierrot le fou (1965), the pair are cornered on a beachside cove by a frantic search party consisting of Hayward’s fretting parents (Frances McDormand and Bill Murray), Gilman’s anxious Scout Master (Edward Norton), and the sole member of the local constabulary (Bruce Willis).

Horrified at their discovery, Gilman beelines backward into the comforting modish mustard yellow of his tent, hastily zipping the flap shut as Murray barrels towards him. After a twinkling reprieve in their pop-up fortress, Murray effortlessly yanks the tent off the ground, exposing the two star-cross’d preteens to their parental pursuers. It’s a terrific scene, at once terrifying and deeply funny, articulating in a moment everything Moonrise Kingdom gets right, and everything Anderson seems to have been working towards.

Fantastic Mr. Fox (2009) worked for all the same reasons the bulk of Anderson’s previous films—The Royal Tenenbaums (2001), The Life Aquatic With Steve Zissou (2004), the entirely forgettable The Darjeeling Limited (2007)—needled. Where those movies cast adults as un-emphatic, practically autistic empty vessels, manipulated like marionettes in Anderson’s decked-out dollhouses, the kitchen-sink caricatures of Fox’s anthropomorphic woodland proved canny carriers for all the quirk, kook, and cleverness. Shot on Super 16, Moonrise Kingdom improves on these lessons. Instead of another lavish cinematic whatzit in which adults bicker, moan, brood, and generally behave like children, Anderson’s finally got around to making a film about children. And here, unlike the largely winning Rushmore (1998), Anderson plays childhood as itself—the stylized precociousness of the kids in Moonrise never aspires to adulthood, cigarettes traded for geeky corncob pipes.

It’s not only that Moonrise Kingdom is about kids, thus enabling Anderson to get away with all the precocious nonsense and pop-art analogue fetishism. It’s how these kids exist in the long shadow of adulthood, in a world where a moment of brief sanctuary from parental authority can be lifted right over your head. The adults seem etched with effective disproportion, realized from the craned-neck vantage of a kid’s point-of-view. Even their panicked, exhaustive search for the two wayward romantics seems comically exaggerated, as if it were the stuff of the children’s own conspiracies of persecution. Most of Anderson’s films have always been about the strongholds of delayed adolescence and arrested development, where opulent world-weariness covers for a just-as-stylish midlife malaise. Moonrise Kingdom works—and works, in places, as wondrously and delightfully as Fantastic Mr. Fox—because it ruptures all these thematic and emotional strongholds, without laying waste to that trademark veneer.

Indeed, Moonrise Kingdom is rich in those nifty little details—a suitcase full of children’s adventure novels, a pair of earrings MacGyver’d together from bugs and fish hooks, pleated bobbysocks and vintage textiles and patches and patterns of all kinds—that have always made Anderson’s films easy things to admire, if difficult to really like. Here though, the details stoke nostalgia not just for fabrics or fashions, but for childhood itself. It’d be easy for this to teeter into the mawkish if, as in Rushmore, all the sympathetic adolescents talked like their wiseass elders. But they don’t. When Gilman and Hayward embrace on their secluded beach, both stripped down to their underwear and she says, merely, “It feels hard,” it’s neither cutesy nor clinical, a beautiful end-of-innocence that stages the transition between the naïveties of childhood and the sprawling forest of what lies beyond.

Credit here goes not only to the director, but to the cast he’s wrangled together. Like the Coens, Anderson is one of those American filmmakers who must seem attractive to work with, due to the way in which his films orbit the mainstream just so. Murray of course owes much of his late-career reemergence to Anderson, but it’s the new additions that enliven Moonrise Kingdom’s landscape. Tilda Swinton, whose own chilly chameleonic quality and harsh deco lines make her an ideal Andersonian objet, is excellent, playing a lavender-caped villain known only as Social Services, effectively splitting the difference between Nurse Ratchet and Darth Vader. Kingdom even calls in a brief walk-on from Harvey Keitel, playing the menacing Scout Master General, and it’s of course inherently funny to hear someone who has likely cursed every possible permutation of four-letter words ask, “Who is this bimbo?” while wearing unflattering khaki short pants. Norton, gawky and kiddish, puts his weak chin to good use. He fits in well amongst the beige-clad extended cast of Khaki Scouts, whose function as man-hunters hounding the fugitive Gilman transforms over the course of the film, with the group of dirty dozen-year-olds aiding and abetting their fellow scout and his sweetheart’s escape from the island.

But it’s Willis who stands out, if only by receding into his character’s measured degrees of dopiness and likeability. He’s remarkable playing “stupid and sad” (as he’s described by Hayward), the film investing the faded ’80s action hero and serial cheque-casher with that same meta-textual melancholy that defined Murray’s mope in Rushmore. “I can’t argue against anything you’re saying,” Willis tells Gilman over a dinner of pan-fried sausage and grilled cheese. “Then again, I don’t have to. Because you’re 12 years old.” It’s the film’s best line-reading, a neat piece of dialogue that further fudges the film’s boundaries between the worlds of childhood and adulthood. As the film progresses, these borders—and the authorities patrolling them—weaken, while Anderson’s charismatic kids slowly nudge the world of grown-ups into bending so-slightly around them, the film’s own physical logic becoming more giddy and child-like in the process (late in the movie, what would likely be a fatal lightning strike barely phases Gilman’s spirited hero).

It’s this progression, and all these performances by skilled actors playing not stilted, silhouetted cut-outs but well-realized characters (two dimensions, at the very least), which bind Moonrise Kingdom’s formal rigour and high-piled, wall-to-wall visual bric-a-brac. Anderson has made a film that hangs together not just as a carefully constructed tableau vivant, but as a real movie, complete with all the thematic and emotional resonances. And this time he did it with real people.