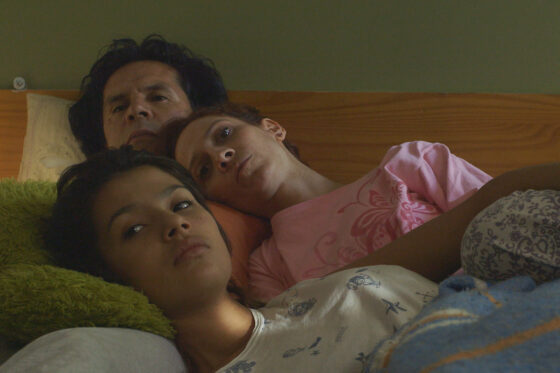 The first image we see in Lina Rodriguez’s deceptively modest second feature Mañana a esta hora (This Time Tomorrow) is something of a puzzle: a gradually lightening shot of a tree in a leafy park in Bogotá, standing sturdy and still. While this depopulated, evergreen overture might seem to promise an essay on the persistence of the natural, it eventually reveals itself as a jumping-off point for the all-too-human commotion to come, even as Rodriguez appears to carry that first shot’s seeming immobility over into her second: an initially static two-shot of teenager Adelaida (Laura Osma) lounging on a bed with her middle-aged father Francisco (Francisco Zaluda), languidly watching TV and teasingly imploring her offscreen mother, Lena (Mauria Shelton), to bring her food. When Lena finally joins her husband and daughter on the bed, collapsing into Francisco’s shoulder at a diagonal, her lighter hair bifurcates the shot between her raven-haired husband and child. By introducing this subtle visual dynamism into a portrait of domestic repose, Rodriguez quietly indicates how the major constant in the life of this middle-class Colombian family, however repetitious and comfortable it may seem, is change—a point that seems to be conveyed by the film’s title, which implies both continuity and disjunction from one day to the next.

Mañana a esta hora marks a natural progression from Rodriguez’s debut Señoritas (2014), which—despite its buzzy, Lena Dunham-esque title—eschewed the revelatory milestones typical of such belated coming-of-age stories in favour of detail-rich vignettes about the mundanity of exercise routines, the necessity of drinking juice before going out on a bender (how better, the heroine’s stern but practical mother suggests, to soak up all the liquor to come?), and the low-key anxiety of walking to a party at night in high heels. Rodriguez’s follow-up is similarly invested in the minute, throwaway details of its characters’ lives (whether they take coffee or tea, for instance, or whether they snuck two arepas before dinner or four), but its bipartite structure—which contrasts the family’s rhythms and routines before and after a tragedy that drastically reorients their laconic existence—is more substantive than that of its predecessor, suggesting that the director has made a conceptual leap whilst maintaining an aesthetic continuity.

Here as in Señoritas, Rodriguez’s style is defined by its warm realism, a mix of formalist detachment and wry observation that gravitates toward the procedural, as characters take stock of and then manipulate their physical environment: party planner Lena determining the proper distribution of tables and chairs for an upcoming event, for instance, or the manner in which one must pour a fussy visiting family member coffee just the way she likes it. Often shooting her characters through doorways or narrow hallways, Rodriguez observes them as they tentatively hash out their personal dramas while washing their hands in the bathroom or folding laundry, or captures their conversations amidst the sounds of spoons clinking and jingling against mugs in the kitchen. Though the filmmaker’s slight detachment from her characters can feel overly aloof at times (e.g., a double date where the camera glides back and forth between couples discussing whether it is worse to have no sex or bad sex for eternity), for the most part the distance between observer and observed feels delicate and intentional—a way of making space for small, particular moments to happen without getting in their way.

The emphasis on the minute takes on a decidedly different cast at the rough midpoint, as the film becomes a higher-stakes meditation on big-picture issues like loss and grief, and the way the spaces we inhabit and the people we leave in our wake necessarily adapt to our sudden absence. It’s to Rodriguez’s credit that this shift to the tragic feels adequately prepared for by the first half of the film, both in that retrospectively telling nature-human contrast in the first two shots and in the framing choices and object-focused still lives that followed. The transition from a portrait of a family at rest to a family in mourning is conveyed not by clumsy exposition, but through a series of elliptical observations that have a cumulative emotional weight: the image of a cup left untended on the kitchen counter, a montage of mourners’ faces that conspicuously ends with Adelaida’s, and a doctor’s matter-of-fact speech about how the heart is a precarious muscle structure, prone to shock. Earlier moments that appeared light on narrative substance or dramatic tension are movingly rhymed with portraits of the new normal in the aftermath: Adelaida’s whining for her mother to bring her a snack is belatedly answered by Francisco interrupting her laptop reverie with a fruit plate, the lighting now softer and more natural than before, befitting a room where nobody has thought to turn on a light or open a window in days.

There are some clear precedents for this sort of sensitive middle-class family drama about grief and change. Rodriguez’s attention to seasonal shifts, and the way the past lodges itself in the totemic objects that make up a home with a history, recalls Olivier Assayas’ L’heure d’été (2008), while the hard temporal jump between sections—signalled here by a birthday party with folk music that transitions to the same kitchen, now emptied, at some as-yet unspecified point in the future—might well be a nod to Mia Hansen-Løve’s coming-of-age stories Tout est pardonné (2007) and Goodbye First Love (2011). (One could also draw a line back to Virginia Woolf’s To the Lighthouse, which is equally haunted by the structuring absence of a vivacious party planner who made all the disparate parts of a family home come together, whether by magic or by art.) What makes the film Rodriguez’s own, though, is its distinctive blend of rigorous observation and gentle affect—the way it tells a formally tidy story in a familiar aesthetic language while remaining open to mystery.

Posted in Currency, Web Only