Tom Charity/CS64, Currency, From The Magazine 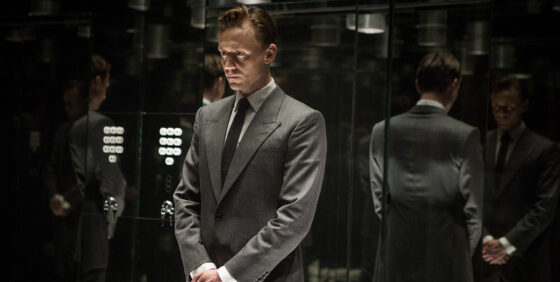 “Later, as he sat on his balcony eating the dog, Dr. Robert Laing reflected on the unusual events that had taken place within this huge apartment building during the previous three months.”

That, friends, is an opening sentence: J.G. Ballard at his best. And damn if Ben Wheatley doesn’t find just the right visual syntax to convey that tone of sanguine urbanity, spiced with a soupcon of barbarism. Man bites dog!

It is time for High-Rise at last. Published in 1975 (the same year, incidentally, that David Cronenberg infected a condo with sexual slugs in Shivers), the novel is a kind of adult Lord of the Flies, with a luxury tower block—all mod cons—replacing William Golding’s shipwreck island, and instead of the kids there’s a cross-section of mid-’70s swingers, lefties, and jetsetters ditching the social niceties and tearing each other to shreds when left to their own devices.

Producer Jeremy Thomas initially commissioned Paul Mayersberg to adapt Ballard’s novel for Nic Roeg (Roeg did Bad Timing [1980] instead, and later collaborated with Thomas and Mayersberg on Eureka [1983]). In the ’90s, Cronenberg and Thomas did Crash (1996) instead, and more recently Thomas tried to get High-Rise made with a script by Richard Stanley and Canadian director Vincenzo Natali. But in the end it’s fallen to Amy Jump and Ben Wheatley to erect this gleefully perverse and ferociously pissed-off edifice, some 40 years after Ballard hit on his perfect allegory for an increasingly technologically introverted, narcissistic, and economically polarized society.

If that seemed like a perverse dystopian fantasy in Edward Heath’s Conservative Britain, it looks downright prophetic in retrospect—and not only because, as I write, the papers are full of scandalous stories about the late Mr. Heath and a pedophile ring operating at the very top of the British establishment.

Seizing on the delightfully oxymoronic possibilities of an apocalyptic period film, Wheatley has retained the ’70s period trappings; concrete modernism on the outside vying with patterned wallpaper and faulty electricity (from January to March 1974, Heath’s government implemented the “Three-Day Week,” restricting electricity in response to a coal miners’ strike). High-Rise filters memories of ’70s Britain through rancorous satire: desperately bourgeois wife-swapping parties, seething class conflict, and mounting piles of rubbish (the garbage men were on strike too). The unofficial theme tune for the era is ABBA’s 1975 hit “SOS,” reprised in various guises here. Yet the movie feels of our time too, immediate, or perhaps imminent, a flash-forward (not backwards) to a present tense we already know in our bones: savage, chaotic, cannibalistic, and doomed. As Ballard puts it, it exists in “a future that had already taken place, and was now exhausted.”

This isn’t what mild-mannered Laing (Tom Hiddleston) anticipates when he opts for the self-imposed isolation of a large but empty and anonymous apartment on the 25th floor. It’s an address that places him firmly in the middle class of a strictly stratified society, though with his bachelor-boy good looks and career as a brain pathologist he may justly fancy himself to be upwardly mobile. Still, he’s torn between his attraction to sexy single mother Charlotte (Sienna Miller), who occupies a suite close to the building’s architect, Royal (Jeremy Irons), and his sympathies for lowly documentary filmmaker Richard Wilder (Luke Evans) and Wilder’s wife, Helen (Elisabeth Moss). Like most families, the Wilders live down at the base of the building, on the second floor. (Turn the Snowpiercer train from a horizontal to a vertical axis, and this is what it looks like.) Royal, of course, lords it over everyone in a vast penthouse which protrudes out from the building like an upturned L, and which opens up onto a folly of a rooftop garden worthy of Versailles. There is even a horse.

The film may be a folly itself: Fury Road without a chase, without a road, even. The narrative turns on the fallout when Wilder leads a group of kids to crash a private pool party. Ballard doesn’t go in for cause and effect. Events emanate from the gestalt. Shit happens. There is a death. “Nothing that can’t be swept under the rug,” is the order of the day, but everywhere you look the high life in this high-tech high-rise is falling apart. The lifts don’t work. The lights are out. The shelves in the grocery store on the ground floor are empty. Relationships break down. Inhibitions are shed. The party is getting out of hand. The impotent Royal keeps insisting his building is an experiment, and “still settling.” He’s deluded. The tower—and the movie—implodes in an orgy of destruction.

Wheatley’s first three features are all tight, low-budget black comedies, sharp social satires set in a kill-or-be-killed lower-middle-class England. His fourth, A Field in England (2013), is an hallucinatory, Beckettian vision of Civil War deserters caught in their own never-ending circle of hell. High-Rise has the same mordant, dog-eat-dog worldview as the earlier films but has more in common with the loose, irrational, psychic-sensorial assault course he tapped in A Field in England. But that was made in 12 days on a shoestring. This is Wheatley unleashed, with, one imagines, a budget that must have been more than equal to his four previous films’ combined.

DP Laurie Rose—like Jump, a Wheatley regular—does extraordinary work here. After the monochromatic A Field in England, High-Rise is saturated in hot reds, blues, yellows, and greens; a heady kaleidoscopic palette that’s almost as trippy. Although it’s (almost all) set in a single building, this is the first Wheatley movie where he allows himself to flex. It’s a very geometric film: a film not only of surface pleasures, but of precipitous verticals, acute angles, movement in space and time; the exhilaration of exhibitionism…An atrocity exhibitionism, naturally, just as Ballard would have wanted.

In one scene—off site—we watch Laing ply his trade, demonstrating what a human head looks like if you peel away the facial skin. It’s a reminder of Ballard’s days as a student of anatomy, but also a remonstration to get over our natural repugnance and observe. Audiences would do well to take note. High-Rise is not what you would call an easy watch. But as a scathing, Swiftian indictment of free-market capitalism, a community so cocooned that “people usually don’t care what happens two floors above or below them,” and society in free-fall, this tour de force belongs on a pedestal alongside Lindsay Anderson’s maligned Britannia Hospital (1982) and Terry Gilliam’s Brazil (1985). But it’s also more than that: a dispassionate study of the human animal in all its perversity and pride, presiding over the rubble as all around him the future goes up in smoke.

Posted in CS64, Currency, From The Magazine