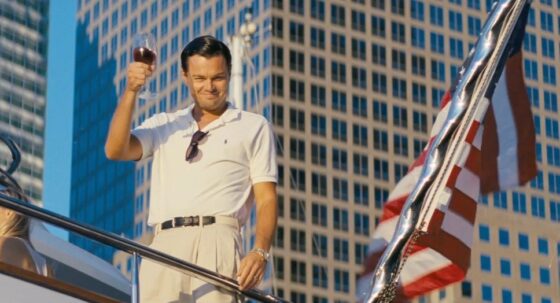 Based on the memoirs of ’90s stock swindler Jordan Belfort—whose investment firm cum criminal enterprise Stratton Oakmont made him a multi-millionaire by the age of 26, and resulted in investor losses of over $200 million by the time he was sent to prison for fraud and money laundering in 1998—Martin Scorsese’s The Wolf of Wall Street is a down, dirty and direct study of the amorality the financial world not only fosters, but celebrates. Taking place almost entirely within the tunnel-vision worldview of its protagonist, Wolf is accordingly, despite its three-hour running time, considerably narrower in scope than such other Scorsese epics as Casino (1995), Gangs of New York (2002), and The Aviator (2004). Abandoning critical distance for a full-scale immersion in Belfort’s fast-track lifestyle, the film itself is like an overdose, rendering the classic rise-and-fall story as a garishly cracked comedy where the rise is one gigantic high and the fall is plushly cushioned.

While Scorsese’s latest resembles After Hours (1985) in its absurdist tone and progressively exhausting succession of wild occurrences, it’s GoodFellas (1990) that is clearly Wolf’s closest cousin in the director’s oeuvre, the latter’s headfirst dive into the cutthroat world of finance aligning with the former’s plunge into the (more literally) cutthroat world of the mob. Yet while GoodFellas’ Henry Hill (Ray Liotta) cloaks his lust for money and power in the mob (senti)mentality of family, respect and belonging, Belfort (Leonardo DiCaprio) is driven entirely by narcissism: his “friends” are merely his pawns, their slavish approbation a mirror of his own self-regard. Pumping up his boiler-room crew with ridiculously over-the-top pep talks, conjuring up an infectious, testosterone-fuelled energy that sends everyone in the vicinity into a mad frenzy, Belfort is a performer on a stage, if not the director of the movie that is his life—at one point, the camera shakes as he stomps the floor during one of his speeches, as if his very gestures are controlling the film we watch.

In so aggressively mirroring the impenetrably insular worldview of its protagonist, Wolf is not, as some have charged, neglecting the grim reality of Belfort’s depredations so much as illustrating the willful remove from reality that allowed him to perpetrate, and perpetuate, his scams. The ever more panoramic expanses of Belfort’s luxury-laden world—from the skyscraping penthouses of his assorted NYC haunts to the stunning vistas of European getaways to the endless expanse of ocean as seen from the decks of his private yacht—inversely reflect his ever-shrinking conception of the world outside his high-rolling hothouse. Connected to their prey solely by a telephone line, isolated and insulated from those they’re exploiting, Belfort and his cronies are free to reign in their own fantasy, their collective withdrawal from reality fuelling a wholesale regression from civilization. Yelling, smashing baseball bats, bumping chests (and in one shot, bumping right into the camera), chanting, drinking, drugging and fucking, these Wall Street warriors are depicted as Neanderthal buffoons, existing in a primitive playground of unchecked pleasure-seeking with zero consequences. (As Belfort’s buddy Donnie Azoff (Jonah Hill) reassures him after a particularly distasteful incident on an airplane, “Luckily we’re in first class.”)

Appropriately for this overheated atmosphere, Scorsese is at his most formally hyperactive here, deploying an arsenal of whip pans, slow-mo, freeze frames, and intentionally jarring jumps between formats and aspect ratios, while cinematographer Rodrigo Prieto (collaborating with Scorsese for the first time after making a name for himself working with Alejandro González Iñárritu and Ang Lee) brings an uncanny, dreamlike quality to his images, the sharply etched lines and vibrant colours somehow only further testifying to the illusoriness of Belfort’s private fantasyland. Yet even as the film relentlessly rides the roller coaster that Belfort builds for himself, Scorsese is able to seamlessly integrate some fleeting, but pointed, moments of editorializing. A cursory but clever shot of a statue of Benjamin Franklin, framed from behind as Belfort makes his early foray onto Wall Street, makes it seem as if the unscrupulous trader is sneaking in unbeknownst to the Founding Father; strobe effects and a classic Scorsese needle-drop on the soundtrack lend an eerie, disturbing quality to a scene of after-hours debauchery when a gaggle of strippers is unleashed on the Stratton Oakmont office; and when Belfort’s first wife catches him cheating in a limousine parked in front of the Trump Tower and drags him out into the street, Scorsese atypically captures this typically hysterical happening from a chilly, matter-of-fact distance, a brief moment of relief from the film’s otherwise pulsating pace.

The most significant moment of departure, however, comes late in the film, as we see Denham (Kyle Chandler), the FBI agent chasing Belfort, riding the subway and surveying the fellow riders around him: tired, real people in a real setting, a sobering contrast with Belfort’s bubble world. It’s a telling prelude to the (seeming) downfall of this fake empire, which, appropriately, takes place on camera, as the FBI bust Belfort as he’s in the middle of taping an infomercial for his get-rich-quick seminars. Having kept it at a distance for so long, reality finally seems to have come crashing in on Belfort—until, in one of the film’s boldest formal gestures, one of the knocked-over video cameras through which we have been viewing the action miraculously rights itself, as if the extra-diegetic director Scorsese had taken the helm from the scene’s diegetic cameraman in the middle of the take.

This collapsing of authorship sets up the film’s haunting final scene, where the actual Jordan Belfort introduces “himself” (i.e., DiCaprio) to an eager audience, the former wolf having rebranded himself, after an unbelievably brief stint in prison, in the sheep’s clothing of a motivational speaker. As DiCaprio-as-Belfort launches into his spiel, the frame expands from the televisual ratio of the recording video cameras to the widescreen ratio that has previously signified the film’s “reality”—an echo of the conclusion of The King of Comedy (1983), where Robert De Niro’s Rupert Pupkin, having commandeered the camera’s gaze at gunpoint, becomes sovereign in its (and, by extension, our) eyes for the duration of his pathetically clichéd standup routine. As in King, the finale of Wolf brings the motif of performer and audience to its logical thematic endpoint. In an early scene in Wolf, Belfort’s mentor (Matthew McConaughey) likens the stock market to an imaginary Ferris wheel that keeps spinning so long as people keep buying the nothing sold to them; at film’s end, Belfort’s empty promises—like Pupkin’s hollow jokes, both a symptom and an epitome of consumer culture—accordingly consume all before them, including Scorsese’s satire and ourselves, the eager audience. Ultimately, Wolf’s portrait of the unscrupulous seller becomes just as much a portrait of the undiscriminating buyers: the exploited cogs of late-capitalist America, who, no less than their/our exploiters, help perpetuate the disassociation of profit and product, worship the false god of Success that helps maintain an unduly privileged, fundamentally amoral class, and forgive the outright crooks that class fosters as if they were a favourite child.