Jonathan Rosenbaum/CS46, Currency, From The Magazine 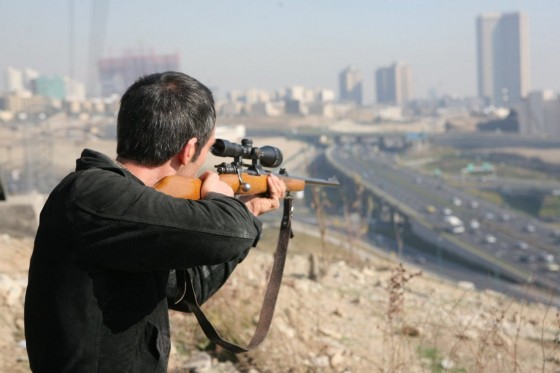 Underneath the Persian credits, over heavy metal music, the camera roams around inside a colour photograph, grazing over pointillist surfaces and male faces—finally pulling back to reveal the Islamic Revolution Guard Corps in 1983, getting ready to drive their motorcycles over a huge replica of the American flag on the pavement in front of them. Cut to black and the film’s title, The Hunter.

Cut to a highway tunnel, then to a rifle being loaded in the woods, then to the same title hero (played by the writer-director, Rafi Pitts) holding the rifle in front of a raging campfire at night. Cut to an overhead shot of a busy Tehran freeway—then to a sinister carwash that seems to be located in the general vicinity of Hell, smoky fumes rising from the spray. And finally to the hero being told by a potential employer that as a convict he doesn’t qualify for a day job, he has to take the night shift. But as we discover a little later, his wife Sara already has a day job, meaning that when he takes the night watchman job, he’ll have little time to spend with her and their six-year-old daughter.

It’s amazing how many reviews of Pitts’ fourth feature have been confidently—and, I think, inaccurately—calling it minimalist. With so much going on in terms of sound and image, and all that is conveyed about living in Iran today (including a view of Tehran in all its modernist, polluted disarray that captures the city I visited a decade ago better than any other film I’ve seen), what could they be thinking of? Even though a few details towards the end of The Hunter (e.g., a plaintive and percussive electric guitar accompanying figures in a labyrinthine forest) evoke Dead Man (1995)—a film that can plausibly be called minimalist, along with Jim Jarmusch’s other films—I would argue that the main thrust of this film is anything but minimalist; in this case, an implied insult that seems predicated on a misunderstanding.

It’s true, however, that Pitts’ singular performance in the title role—poker-faced except for when he’s seen with his family—is a bit of a Rorschach test; indeed, this is part of its peculiar strength, making his character sympathetic and terrifying at the same time. But we don’t need to know why he went to prison in order for his repressed and barely contained violence, his resemblance to a walking time bomb, to become meaningful. It’s also true that the plot, however fluidly and economically presented, is full of other unanswered questions. What does the opening photograph—which I’ve partially identified according to its description in Alissa Simon’s Variety review—have to do with the remainder of this film? What is the lead character’s name? What is he doing with a rifle in the woods? If he’s a hunter, why do we never see him hunting?  (In fact, the only indication that he’s a hunter, apart from his possession of a rifle, is the denied request of a youth at his job that he come along on one of his hunting trips.)

Should we find political significance in the fact that the hero’s car and the walls of his apartment are both green? If so, the film never clarifies this. When his wife and daughter both mysteriously disappear, he’s told by a police official that his wife was accidentally killed in a shootout between police and rebels (this is during Iran’s last presidential election campaign, before the election and subsequent crackdown); they’ll need an autopsy to determine whether the bullet came from the police or the rebels, and they don’t know anything about his daughter. Some time later, after he’s been asked to identify his wife’s body in the morgue, he’s asked to identify his daughter’s body there also—and on both occasions he gazes at the off-screen bodies, from the same oblique camera angle, without any visible sign of emotion. But by then we have already seen him walking the streets and driving through neighbourhoods with a photograph of his daughter, which he forlornly shows to strangers, hoping to come up with a clue; and when he checks at a hospital, all that he (or we) can find is other lost or abandoned children.

Not knowing—a central facet of the hero’s helplessness, including the fact that the police remain accountable to no one—is, in fact, an important part of what this film is about. And, as in much of contemporary life, the explanations that we’re waiting for and hoping for never arrive. When the hero pays a visit to his mother (played, incidentally, by Pitts’ real-life mother) around the time of his daughter’s birthday, he invents excuses for her and his wife not being with him, choosing to conceal the fact of their disappearances and (probable or actual) deaths, but we aren’t privy to any of his rationale for this behaviour; the underlying impression is only that repression has become an integral and necessary part of his existence. Later, we find him either “remembering” or imagining his wife in a flashback confessing to some unidentified, off-screen listener that she lied to her husband, whom she now visits in prison, about being pregnant, adding, “I’d rather die than for him to know I lied. Please help me—I must have a child.” (Presumably, she’s pleading to be allowed to have sex with her husband when she visits him in prison.) But like so much else in the film, this is a narrative trace rather than part of a narrative.

Yet when the hero randomly shoots two cops on a distant freeway and flees to the country, where he’s pursued and captured, it’s more than just a change in locale like those in On Dangerous Ground (1952), Nightfall (1957), or Tirez sur le pianiste (1960). It’s also a shift in genre that eliminates most of the unresolved questions that have been piling up, through a strategic shift in focus. The major emphasis now is on the enmity between the two cops who arrest him—a volunteer who wants to kill him right away and a draftee who insists on his being tried in court. (Similar issues involving Iranian cops can be seen in the last two features of Jafar Panahi.)

What persists in both parts of the film is a snapshot of contemporary Iran with some of the precision, poetry, and despair that Ebrahim Golestan brought to Brick and Mirror in 1965, including the same horror of absurdist bureaucracy (and a comparable vision of abandoned infants in a hospital)—which hardly seems accidental given that this film quotes both Golestan’s A Fire (1961) and a film he produced the following year, The House Is Black. (Both films are seen on television, in the hero’s flat and at the home of his parents, respectively).

I would guess that some reviewers have been misdescribing The Hunter as “minimalist” because they haven’t considered the concept of essentialism—the process by which inessential narrative details get eliminated for the sake of greater force and clarity. Sticking to basics isn’t the same thing as reducing or simplifying basic ingredients. Bresson—another essentialist commonly mistaken for a minimalist, especially during the ‘60s, when his rigour was widely regarded as eccentric mannerism—characteristically sought to make his actors expressive according to what they were and what their bodies said, not according to what they might consciously project as actors. (It’s worth adding that Pitts took over the film’s leading role from the non-professional he had in mind at the last moment and out of practical necessity, not according to his original design.)

Pitts’ essentialism, moreover, has a vital ethical dimension. The hero shooting two cops at random on the freeway becomes morally equivalent to the draftee cop shooting him from a distance in the final sequence, simply because he’s dressed in the other cop’s uniform. In both cases, one could say that blind hatred trumps and makes irrelevant whatever position one has, whatever side one happens to be on, just as blind and arbitrary injustice is what sets the other wheels of this tragedy in motion. A country in a state of potential or actual civil war describes a good many places today, and not just Iran or the United States or Egypt. For Pitts, it would appear that this civil war and the hatred it engenders has a way of levelling all the other issues; leaving many questions unanswered ultimately becomes both cause and effect.

Posted in CS46, Currency, From The Magazine