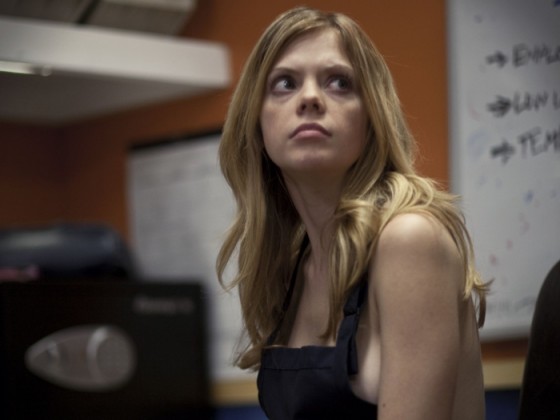 In a 2007 interview with Filmmaker magazine, Craig Zobel opined that “there’s something sexy and cool about being a scam artist…it just never fully lets you empathize with the person on the other side of it.” He was referring to the fact that his debut feature Great World of Sound (2007) included sequences in which real-life musicians were shot via hidden cameras during what they thought were authentic auditions. This radically prankish tactic neatly paralleled the film’s story of “talent scouts” peddling ersatz record contracts while consolidating its underlying theme: that most people will believe what they’re told, especially if it seems to be good news. Zobel’s new docudrama Compliance simultaneously reinforces and critiques the director’s theory about the erotic aspects of the con and flips the theme 180 degrees: its scam artist is a lip-smacking pervert and his victims have a definite willingness (or perhaps an urge) to expect and believe the worst—especially if it’s about somebody else. The already notorious reputation of Compliance, which bowed to wildly mixed reception at Sundance, owes to the fact that it keeps steadily and pitilessly redefining the concept of “the worst” for almost its entire duration. Where other films travel along an arc, Compliance closes like a vise: it’s a compact, pressurized piece of work.

The film is closely based on a 2004 incident in Mount Washington, Kentucky, where a man impersonating a police officer called a McDonald’s and convinced the female shift manager to detain and strip-search a female employee whom he accused of theft—and then, even more unbelievably, talked the manager’s boyfriend into sexually assaulting the worker while he offered instructions over the telephone. Compliance is unremittingly bleak right from its opening sequence, which describes a tetchy encounter between dowdy, middle-aged fast-food franchise supervisor Sandra (Ann Dowd) and a delivery man who reams her out over a truckload of bacon spoiled by an improperly closed refrigerator. (“You’re fucked without bacon, I’ll tell you that.”) It’s a small narrative detail, but the dual implications of job-site carelessness and lingering rot permeate everything that follows. Sandra suspects that the culprit in the bacon situation is Becky (Dreama Walker), a blonde cashier who looks to be barely out of high school and whose blithely lithe presence seems to undermine the older woman on every level. (“That’s cute,” smiles Becky when she learns that Sandra’s fiancé is thinking of proposing, before offering a giggly account of her own sexual adventures; Zobel here inserts a short, ominous shot of Sandra glaring at her over a deep fryer.)

In a few quick, precise strokes (aided mightily by Jane Rizzo’s excellent editing), Zobel sketches the geography of the restaurant as well as a plausible service-industry vibe where the boss offers scolding reminders about professionalism to younger workers who know it doesn’t much matter. These fleet opening scenes have a persuasive quasi-documentary quality, but they’re just an amuse bouche for the greasy main course. Sandra takes a phone call from a man (Pat Healy) who claims to be a local cop investigating a customer complaint of theft, with Becky as the main suspect. The caller says that Becky stole money off the counter and may be hiding it on her person or in the back of the restaurant; he also hints that Becky’s transgression may only be the tip of the iceberg, a sinister implication that he claims justifies his invasive demands. “What is the larger investigation?” asks Sandra plaintively, betraying her own paranoia and announcing Zobel’s theme: the connection between his stranger-than-fiction tale and the sort of top-down conditioning beloved of behavioural scientists and corporate entities alike, for entirely different but nonetheless deeply interrelated reasons.

The fast-food-joint-as-microcosmic-American-terrarium conceit is a bit neat, but it works to give some wide-angle sociological undergirding to a scenario that grows progressively visceral for participants and viewer alike. A colleague dismissed the long middle stretch of Compliance as “My Little Michael Haneke Kit,” and the allusion is an apt one: Healy’s mostly disembodied performance recalls the cruelly authoritarian behind-the-camera voice in the rehearsal sequences of Code inconnu (2000), his phone-in pervert becoming a kind of film-director surrogate as he choreographs his blinkered quarry into mutually humiliating positions. The suggestion is that he’s getting off as much on the near-hypnotic influence he wields over nominal authority figure Sandra as on the mental pictures he’s processing of Becky shivering naked in the corner of the stockroom—pictures which, for us, are of course not only mental. While the camerawork is discreet enough to preclude much in the way of frontal nudity—the same way that Haneke so ostentatiously elided actual depictions of violence in Funny Games (1997)—we’re theoretically being held rapt by our escalating anger and confusion that anybody would continue to go along with this situation, and a lurid curiosity about how far it actually could go. It’s a double-bind that ensnares everybody on either side of the camera, while letting the orchestrator go scot-free on the grounds that he’s speaking uncomfortable truths rather than simply power-tripping.

But Compliance doesn’t feel that high-handed, because Zobel lets his actors be more than props: Dowd is especially good at suggesting the conflicting and at times seemingly unconscious emotions behind Sandra’s unconscionable treatment of her employee, and also the way that she silently douses her doubts every time they flare up—a well-honed coping mechanism. Walker’s role is arguably even trickier, since Becky regresses from defiance and denial—sincere responses, since she is totally innocent—to a kind of cowed anxiety where doing what she’s told, however illogical and repugnant, is not only preferable to the great unknown of some external punishment (“This is all being recorded,” chides her antagonist) but also possibly a way of shortening her ordeal. It’s this skillfully maintained air of verism that has made Compliance into a minor succès de scandale, and yet the film’s most problematic section is its comparatively under-discussed final movement, which, like the extended obscene-caller sequence, hews closely to the public record about the original incident. The character who finally puts a stop to the caller’s game is the gruffest, most conspicuously working-class figure in the film, a choice that’s rooted in fact—the real-life protestor was the restaurant’s maintenance man—and also in line with the general thrust of Zobel’s critique: as a marginal employee with no chance for upward mobility, he’s less inclined than the others to toe the company line. There’s also a strenuous sense of authenticity to the scenes depicting the authorities’ high-tech response, as they track down the culprit by determining the serial number of his calling-card and consulting surveillance footage of the convenience store where it was purchased.

There’s an interesting dichotomy here in the way the police dragnet tightens even as the scope of the crime widens: the cops are shocked to hear that the call was just one in a series of identically staged hoaxes. But Zobel elides those details to get to his ostensible money shot: a TV interview where Sandra tries and unsurprisingly fails to explain her inability to protect her employee to a skeptical talking head. From a structural point of view, this scene makes sense, bringing us back to the character we started with and submitting her to an ex post facto interrogation that’s meant as a summation (“Every time I asked a question he had an answer,” she says despairingly, painting herself as a victim). It’s still odd, though, that this ostensible critique of one inherently compromised administrative structure ends up implicitly valourizing another, as the real cops do yeoman work in bringing in the fake one. Which would be fine, except that in reality the suspect was acquitted due to a lack of binding evidence—something that may be beyond the compressed narrative purview of Zobel’s film, but seems at least worth mentioning, if only to emphasize the larger point about the inherent fallibility of any chain of command. Instead, the arrest of Healy’s character, and a rushed bit where Becky is advised to sue the Chick-Wich franchise rather than Sandra herself, suggest that, at the end of the day, the system works. If anything lingers here, it’s not the question of Sandra’s complicity, but rather whether the director’s interest in the power of false pretenses, and obvious skill for elaborately self-contained intrigue, might not be tricky little traps of their own.