The Babadook (Jennifer Kent, US)

Adam Nayman/CS61, Currency, From The Magazine 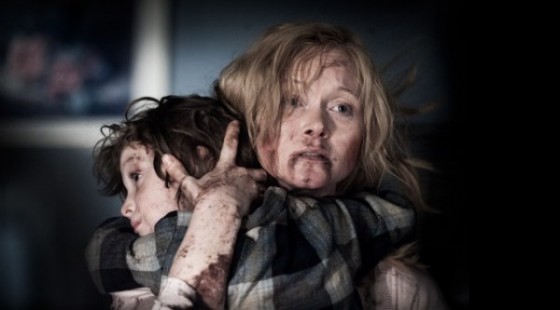 A semi-surprise winner of the New York Film Critics Circle’s Best First Film award, Jennifer Kent’s Sundance breakout The Babadook feels very much like a debut even as nearly everything in it is familiar. It’s a fine line between cliché and archetype, and Kent’s tale of a single mother trying to protect her progeny from a black-hatted phantom has convinced a lot of critics that it’s on the right side of that divide. But to these eyes, the only thing that really distinguishes this independently produced Australian horror film or elevates it (slightly) above the studio-financed spawn of James Wan is that it wears its thriftiness like a merit badge while also politely declining the brutal violence and gore usually favoured by cheapjack genre filmmakers. These strategies give the impression of seriousness and subtlety. But, like the canted camera angles favoured by Kent’s cinematographer Radek Ladczuk, it’s a carefully forced perspective.

What a lot of viewers seem to be responding to in The Babadook is the script’s equivocation between grief and monstrousness, which doubles as Kent’s best and only idea. The title character, who first appears in shadowy two-dimensional form in the pages of a children’s book, gradually forces his way into the real world—an abstract concept inexorably made flesh. This is an old trope: from Walt Disney to Timothy Findley, the idea of fictional characters suddenly taking on corporeal form and invading reality is well-established, and it’s always richly insinuating: the keynote pop-Gothic image of the last 20 years is probably that pale, broken-wristed waif crawling out of the television at the end of Nakata Hideo’s (still creepy) Ring (1998)—the ultimate in 3D viewing.

So a literary creation suddenly showing up at the door and asking, in the requisite low, croaking voice, to be let in is hardly reinventing the wheel, plot-wise. What supposedly heightens Kent’s conception is the idea that Mr. Babadook is actually a stand-in for a dead father figure, whose lingering absence has opened up psychic wounds in the heads of Amelia (Essie Davis) and her six-year-old son Samuel (Noah Wiseman). The film opens with Amelia having a nightmare about her husband’s death by car crash—he was the only fatality—and for the rest of the film, Davis acts as if the character is still trapped in that lucid, awful dream; lurching between her job as a nurse and Samuel’s school, where she’s regarded as something of a negligent or inept parent, she’s like a somnambulist.

It’s always a risk to begin a movie with a character who’s already at her wits’ end, as it doesn’t give an actor very far to go. Davis’ acting is slightly laboured—she piles on nervous mannerisms as the character’s blonde hair becomes increasingly matted and unkempt—but she’s positively naturalistic compared to the movie around her, which has been stylized to within a few inches of its life. Amelia and Samuel live in a house whose blue and grey hues suggest freshly and drably painted stage flats; outside, all the leaves are brown and the skies are grey. The connection between the monochrome, Edward Gorey illustrations in the Mister Babadook book and the larger world containing it are apparent, and while Kent is smart enough not to go Full Burton, she also arguably asserts her own artistic and cultural frame of reference. It’s her movie, and she can of course do whatever she wants, but it’s also a bit distracting; when Samuel is glimpsed watching ancient Méliès productions on television, the nod to lo-fi illusionism and showmanship is somewhere between salutary and self-congratulatory.

There are other borrowings, high and low: if the harried and haggard Amelia evokes other horror-movie moms from Rosemary Woodhouse to (eventually) Margaret White, the moody and morose Samuel has been sprouted from any number of preceding bad seeds, with a dash of Danny Lloyd’s catatonic moppet in The Shining (1980) for good measure. It’s probably unfair to use Kubrick’s masterpiece as a point of comparison, but Kent invites it by devising a scenario that is in many ways its pointed inverse: instead of a murderous pater trying to hack his wife and child to bits, she gives us a mother-son unit splintered apart and bound together by their sadness over Daddy’s absence. And, in a drawn-out pre-climax section in which she’s possessed by the Babadook, Amelia actually begins to resemble a gender-flipped Jack Torrance, stalking her son through the house in a grotesque pantomime of something that is not exactly smothering motherly love.

In The Shining, Kubrick and his scenarist Diane Johnson drew from the writings of Bruno Bettelheim, which would also seem to be in play for Kent: at one point, Amelia reads Samuel a bedtime story about the Big Bad Wolf. But Kubrick and Johnson understood that one of the best uses of enchantment was satire; their evocations of Perrault and the Brothers Grimm were essentially comic. Their fairy-tale antagonist was the Big Bad Wolf and Wile E. Coyote rolled into one (and Danny’s viewing of Road Runner cartoons on the Overlook’s television set makes more sense than Samuel tuning in turn-of-the-century silent films). It’s also probably unfair to criticize The Babadook for not being at all funny, not only because of the dearth of worthy, earnest 21st-century horror movies, but because certain of its set-ups and images tread so close to genre parody that they beg for a different kind of self-awareness (as in the recent Austrian thriller Goodnight, Mommy) or else the utter guilelessness underwriting Larry Fessenden’s thematically similar and superior Wendigo (2000), which also concerned a small boy coming to terms with the loss of a parent and conjuring up a monster in the meantime to act out his most malevolent fantasies of revenge.

None of this is to suggest that Kent isn’t talented, and a lot of The Babadook is undeniably effective. When the monster makes his first in-person appearance during an expertly elongated and superbly sound-designed nighttime set piece, it’s well and truly spooky—Burtonesque in a way that reminds us of when that used to mean something. Kent is also a willing and able provocateur: the suggestion that Amelia’s despondency over her husband’s death has manifested as a kind of latently violent resentment against Samuel is discomfiting—usually monstrous movie moms torment adult sons and daughters, which is easier to take—and provides a kind of heavy psychological undergirding to scenes that might otherwise merely seem like base child-endangerment shenanigans. She’s a very conscientious filmmaker: everything is accounted for. That’s one way to succeed in a genre often marred by superfluousness and gratuitousness. But it’s equally true to say that oftentimes, the best horror movies are defined by reckless excess—those that get by without it have to be surpassingly elegant exercises like Jack Clayton’s The Innocents (1961), a film whose sociological, psychological, and sexual subtexts are as carefully buried as a corpse.

That’s not true of The Babadook, which resembles the haunted pop-up tome that is the source of its terror: its subtexts poke out like broken bones beneath the skin of the film. Kent’s achievement is that she’s made a movie whose subcutaneous meanings are as vivid as its shocks, and yet it doesn’t feel like an overwhelming victory. Even the much-praised ending is a little bit too cagey: it indicates that the dark, despairing feelings stirred up by Mr. Babadook can’t be vanquished but only contained—forced back below the surface to be revisited and even nourished, within limits. On one level, the film’s final scene plays as a thoughtful and even-handed metaphor for trying to master trauma; on another, it’s just a recognizably downbeat, evil-endures, anti-grace note à la a half-dozen ’70s classics (The Texas Chainsaw Massacre, 1973; The Exorcist, 1973; The Omen, 1976; Invasion of the Body Snatchers, 1978; Halloween, 1978…), with an “open” ending that’s really just a neat bit of suturing. At the end of Wendigo, the little boy’s expression upon espying the shoes fate has invited him to fill several decades earlier than expected is unreadable, and it lingers long after the movie is over. When Samuel goes into the basement to feed the safely constrained ghoul, his face—and the filmmaker’s intentions—are as legible as the large-print type of a children’s book.

Posted in CS61, Currency, From The Magazine