Quintin/CS53, Currency, From The Magazine 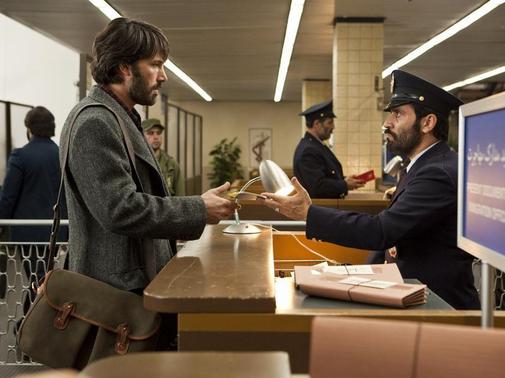 Argo might be thought of as Inglourious Basterds (2009) in reverse, or at least as a reply to Quentin Tarantino’s film. While in Inglourious Basterds, cinema teaches reality how things should have worked, Argo presents an example of how things really worked with the aid of cinema. Although extracting a few hostages from the clutches of the Ayatollah is not as demanding as killing the Nazi leaders and changing the course of World War II, both films talk about the almighty power of cinema to do justice and shape a better world. Tarantino’s megalomaniac fable seems to say that a filmmaker has the right to modify history, while Ben Affleck’s more humble story just shows that history has indeed been modified by cinema. But upon a closer look, Argo is not so humble: it tries to prove that cinema is a tool so universal and so real that it may be used as a last resort when all other options have failed. But that is just a small part of its ambition.

I saw Argo without being aware that the plot, although fictionalized, is based on a true story. Most likely I never even knew that in 1979 six American diplomats escaped from the attack on the American embassy in Teheran, remained hidden for three months in the Canadian embassy, and were removed from Iran by American intelligence with the cooperation of the Canadian authorities. Until the end, I kept thinking that the film was amusing but the plot was completely unbelievable, that nobody could ever have succeeded in rescuing those American citizens by pretending they were the crew of a fake science-fiction film. So, I watched Argo under the belief that it was as least as absurd as Inglourious Basterds; thus my response was exactly the same as the American spies and officials who were so reluctant to give the green light to the “Argo fuck yourself” project (as it’s unforgettably described by the characters played by Alan Arkin and John Goodman, the real producers of the fake film).

When the CIA and the State Department discuss how to extract the hostages, the Argo option is the last one considered. Yet it not only succeeds, but proves that cinema is so popular, universal, and pervasive that making a crazy B-movie among enraged Iranians in the middle of massive political turmoil was considered perfectly normal by ordinary people as well as the Iranian authorities. To underline that fact there is a crucial scene at the climax of the film: as he’s being interrogated at the airport, the diplomat playing “the director” explains the movie to the Iranian police, and convinces them, employing storyboards, that Argo could actually end up being a movie…and, in fact, 30 years later, it did!

Argo states that cinema can be used not only to entertain, but to liberate. That’s a strong metaphor that has always been the claim of cinephiles, certain critics, and filmmakers, but not necessarily one made by the industry, especially Hollywood. The whole concept of Hollywood today includes work, money, and fun, but not necessarily a greater scope for an activity considered mainly as business. However, at the heart of Hollywood’s history, there was always the idea that film may be somehow more important than that. I’m not talking about the ability to inform or educate, or even cooperate with a war effort, nor the role Hollywood played in Americanizing the whole world.

Rather, “Hollywood” is also a kind of Platonic ideal: a different map of politics, society, and people’s behaviour. In any case, it’s a map to which reality should adjust. Hollywood films exist in the realm of the Idea, the place where things are as they ought to be. A place where individualism is not the opposite of generosity, determination is not a synonym of fanaticism; a place where patriotism is not the contrary of cosmopolitanism, where courage is not the patrimony of people carrying guns; a place where anybody, with a simple twist of the plot, can in the end be a hero. “Hollywood” also means that it’s possible to be strong but gentle, to revolt against unfair orders and to be uneasy with red tape and still be part of the system, and also to be clever, creative, efficient, and serious without losing one’s sense of humour. In Hollywood, you can always tell right from wrong, and at the same time see all the nuances involved in any situation.

Argo, like many Hollywood movies, is perfectly adjusted to this idea. Lives are saved and evil is defeated by professionals—from the CIA and from the film business. On both sides of the team there is a great respect for the rules of the trade but also the need to break them when necessary. Maybe Argo’s best scene is the one when Arkin and Goodman’s characters, in order to return to their studio office to take a decisive phone call, decide to barge right through a set as a movie is being shot. The scene parallels the one in which CIA extractor Tony Mendez (Ben Affleck) decides to disobey orders and continue with the operation, proving that the commands at the high levels of politics are as strict as in the film business.

But the morality of the film moves beyond that comparison: what Argo says is that film may save politics in a broader sense than the occasional trick as played by the producers in the movie. If film and politics work alike, why not consider politics as a film? In the end there is no difference between fantasy and reality, and what works for Hollywood works for the United States of America; what is said or done in a film can also be said or done in real life. So in the end, Hollywood is not a factory of dreams, but a source of inspiration and bona fide action. Maybe the only difference between Hollywood and the CIA is that in Hollywood the awards are public knowledge.

The alternative plan for the extraction was the use of military force, which is exactly what the Carter administration did in April 1980 to try to rescue the remaining hostages. That operation ended in a catastrophe, and, with that, so did the President’s re-election chances. Argo doesn’t speak about that major failure, rather about a small success of the Carter administration. It’s a way to praise Carter, to state that he was not so clumsy after all, and that Democrats in power can be tough, patriotic, and efficient even if they speak in a more gentle language than Republicans—a language that’s so close to the one spoken in Hollywood movies, Argo in particular. Affleck’s film shows how reason can prevail over fanaticism, and that means fanaticism on both sides: the more radical faction of the Ayatollah’s forces and the hawks on the American side. Argo states that reason, flexibility, and imagination—the keys for a good script—are also needed to govern a country. That’s what Democrats usually try to say, people like Jimmy Carter, who, as the film suggests, surely deserved another term in office. People like Barack Obama, who escaped his predecessor fate’s while speaking a similar language. It is pretty obvious that Argo is an Obama campaign movie.