Angelo Muredda/CS60, Currency, From The Magazine 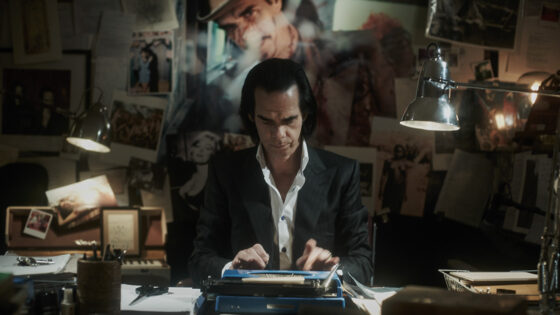 “Songwriting is about counterpoint,” Nick Cave insists early in 20,000 Days on Earth, Iain Forsyth and Jane Pollard’s curious documentary slash postmodern biography of the Australian singer-songwriter and Bad Seeds frontman; you put two disparate images beside each other, he explains, and see which way the sparks fly. That Cave’s definition of songwriting should vaguely recall Eisenstein’s notion of intellectual montage is not so surprising: as the London-based visual artists and filmmakers take pains to show in their tour of the perennially black-clad star’s workspace, Cave is something of a polymath, a murder balladeer who keeps some Auden on his desk, his complete Freud on the coffee table, and his father’s secondhand copy of Lolita locked away in a private archive. That creative juxtaposition is also the distinctive mark of Forsyth and Pollard’s film is more unexpected, given its generic proximity to the sort of promotional extras you might find on a limited-edition Blu-ray tucked inside some remastered Cave reissue. 20,000 Days on Earth is about counterpoint, too, in both its concept and its execution: it dissects its subject’s iconicity even as it burnishes it, disassembles his cult-celeb persona to repackage it more effectively.

The film presents itself as a heightened day in the life of a protean, perpetually searching artist now well beyond the Dantean midpoint of his journey. (If his 20,000th day should happen to coincide with a new Nick Cave and the Bad Seeds album, so be it, although nothing so crass as the business of selling records is ever spoken of at length in the film.) From the moment Cave begins to outline his daily rhythms in voiceover, though—professing that this day he will eat, write, watch TV, and write some more, as he has on any other day—20,000 Days reveals a secondary function as an unofficial companion to Cave’s own stabs at literary autobiography and self-positioning in the odds and ends collections King Ink and King Ink II.

Simpatico as those goals might seem, however, there isn’t an obvious through-line running from the more quotidian details of Cave’s everyday existence (rehearsing at his piano, lunching with Bad Seeds guitarist Warren Ellis, chauffeuring celebrity friends like Ray Winstone) to the loftier interludes wherein he expounds upon his aesthetic theories of inspiration and composition. Yet it’s that apparent disjunct between Forsyth and Pollard’s efforts to ride their subject’s thought bubbles up to the clouds and their impulse to dwell on a fictionalized version of the mundane, bourgie life of a veteran rock star that distinguishes 20,000 Days on Earth from the more straightforward puff piece it might have been. If there is something distinctive about Cave’s own span on this earth relative to anyone else’s, this intellectually slanted approach would seem to suggest, it’s that they’ve been inordinately preoccupied with self-reflection: about what it means to create beautiful things, on the one hand, and to construct an enduring, repeatable version of oneself for public consumption on the other.

Though there’s little that’s new about Cave’s suppositions on either subject—he is far from the first rock-doc subject to observe, with de rigueur reverent mysticism, that “something happens onstage”—Forsyth and Pollard do well to emulate the lyrical vein in their subject’s sensibility that more prosaic filmmakers would have remanded to portentous shots of keyboards clacking, which is here sensibly kept to a minimum. In their use of Cave’s slick black car as a neutral, roaming headspace where thoughts about the job percolate in voiceover as Cave flits between the satellite points of his life (home, studio, countryside), the filmmakers’ work takes some odd but ultimately fitting cues from Leos Carax’s Holy Motors (2012). As in that film, Kylie Minogue appears as a backseat passenger and a spectral trace from the hero’s past—in this case the brief moment in 1996 when their lives intersected for their duet on “Where the Wild Roses Grow,” Cave’s most serious flirtation with the mainstream. A baroque tableau of Cave watching Scarface (1983) on the couch flanked by a son on either side of him, the camera slowly pushing in on their odd family unit, similarly recalls the weird domestic scene glimpsed through an open window at the close of Carax’s film, where Denis Lavant’s endlessly travelling player finally brings his day’s work to a close and kicks back with a family of chimpanzees. Whether that symmetry is accidental or by design, it goes some way toward establishing Cave as an actor and a dramatic construction as much as a documentary subject—someone who, like Lavant’s mercurial thespian, isn’t necessarily more himself at “home” than on any other stage.

While that’s a potentially revealing insight in regards to an artist who has always tried to blur the line between his consciously archaic self-stylings and his “real life,” it doesn’t always square with the filmmakers’ more dutiful efforts to delve into Cave’s personal life, or the film’s alternate function as a tablet for his from-the-mountain pronouncements—a Collected Cave in film form. Forsyth and Pollard seem to want Cave to serve as both cipher and genius, and their oscillation between those poles is not always graceful: ostensibly included to fill in some basic biographical details, the mid-film excursion to Cave’s therapist’s office for a prolonged interview about his upbringing feels contrived in the wrong sort of way. To Forsyth and Pollard’s credit, the therapist’s ponderous chin-stroking and the rich mahogany office set are so plainly artificial that one isn’t sure whether to read this episode as a parody of expert testimony and tell-all interviews or an exemplary example thereof—though that ambiguity might be more fruitful if the conversation yielded more productive insights than revelations about Cave’s adolescent interest in women’s bodies (gasp!), or his father’s delight in Vladimir Nabokov’s style.

Much more affecting, and paradoxically more obviously written, performed, and framed, is a lengthy detour to what the subject calls “The Nick Cave Memorial Museum,” a dank little library housing artifacts, photos, and video from his past professional and personal lives. In it, Cave’s very own archivists (whom one hopes are played by actors) carefully tend to indecipherable old notes and Birthday Party concert stills with gloved hands as the artist holds court before us and his bored workers, lecturing over a projector that splashes the images of his fabled past onto a brick wall. It’s a wonderful vignette, successful largely because it draws out an otherwise underexplored warmth in Cave, who seems to give his best as a performer when he’s called upon to make utterly false situations that aspire to reality (like concerts, or documentaries) feel intimate and true. It’s also a sly distillation of the genre into a kind of living diorama: what more do we want from our biographies of artists, after all, than a multimedia lecture straight from their personal memory banks?

Yet for all its formal playfulness, 20,000 Days on Earth is too starstruck by its subject to fully take the creative reins from him, letting Cave’s secondhand Romantic theories (“The song is heroic, because the song confronts death”) stand as major insights when they’re perhaps best left in notebooks filed away in the memorial museum. The contradictions that set the film apart from its rock-documentary brethren don’t always seem like the product of a deliberately off-kilter structure, but of filmmakers who haven’t entirely worked out whether rock gods are best put on a pedestal or brought down to earth. Yet there’s an ambition to Forsyth and Pollard’s work that’s hard to deny, as well as a refreshingly quixotic commitment to tweaking the generic conventions of the promotional piece they’re making even as they work safely within its bounds.

Posted in CS60, Currency, From The Magazine