Mark Peranson/Columns, CS76, From The Magazine 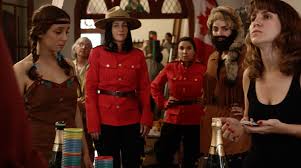 The night that Mariano Llinás arrived in Locarno, I ran into him drinking with his producer Laura Citarella and a few friends, occupying a few tables in a streetside café. Soon after I joined them, I asked Llinás the most pressing question in my mind about his 14-hour La Flor: “What’s the deal with Canada?”

Allow me to explain. At the start of Episode 4 of La Flor, a mini-revolt by the four actresses—who by this point are very familiar faces to the viewer—is in progress. Having worked six years on the film La Araña, they aren’t about to tolerate the director parachuting in a new producer, nor are they pleased with the fact that they haven’t been given a script, nor do they like their characters and costumes: a native, two Mounties, and a bearded woodcutter, visions of Canadiana literally derived from a children’s encyclopedia. But, in truth, the director would rather just be shooting trees. About half an hour later, the film ends up at, as the onscreen text reveals, “Kashwakamak Lake. Québec. Dominion of Canada,” for what amounts to the drop of a petal in the grander context of La Flor. (Note: Kashwakmak Lake does in fact exist, though it is in Ontario, not Québec. Alas, it would not even have been part of Lower Canada, as it is west of the Ottawa River.)

In answer to my question, Llinás pronounced, in a typically booming, almost Wellesian fashion, “Because the most beautiful object in the world is the Canadian flag!,” and he needed to find a way to integrate this amazing object into the set design—which he did, if rather peripherally. (“I love flags!” he continued. So, being in Locarno, of course I asked him about the Swiss flag, to which he responded, with marginally less enthusiasm, “The Swiss flag is also incredible!”) “OK then,” I asked, “you shot the film all over the world, but why didn’t you shoot the Canadian scenes in Canada?” Llinás, voice raised: “How do you know that this is not Canada? Do you know every square kilometre of the Dominion of Canada?” Soon enough, he acknowledged that the Canadian scene was in fact shot in Chile, which was confirmed by eventual Best Director winner Dominga Sotomayor, who coincidentally was sitting at the table and, also coincidentally, was one of the many hundreds of South Americans who worked on La Flor, helping with the Chilean part of the production, though not that particular scene. All clear?

With this exchange embedded in my mind, when it came time to think of a cover for this issue, naturally my thoughts led me to something combining La Flor’s Kabbalistic/Artist Formerly Known as Prince-like symbol and the flag of the Dominion of Canada—two great tastes that taste great together, as the film is poised to screen this fall at festivals in Toronto and Vancouver. (Originally, Llinás was eager to design the cover himself, but unfortunately personal issues intervened, making it impossible; we did what we could to keep the dream alive.) In the brief interview with Llinás that follows (which really only skirts the surface of the film), the director doesn’t get to explain why he didn’t shoot in Canada, though I expect it might have had something to do with running out of money (if I recall correctly, there are scenes in the globetrotting Episode 3 filmed in Nicaragua, England, Germany, France, Russia, Mongolia, Bulgaria, Hungary, Libya, Chile—of course—and, because why not, Martinique). Or perhaps Québec [sic] was not where the director would have wanted to journey the first time that he would enter the fabled Dominion. When I asked him why he wasn’t going to be in Toronto for the TIFF screening of La Flor, he answered, “Why do I want to go to Toronto when I go to Canada for the first time? I want to go to Alberta. Manitoba! I want to see SASKATCHEWAN!”

Posted in Columns, CS76, From The Magazine