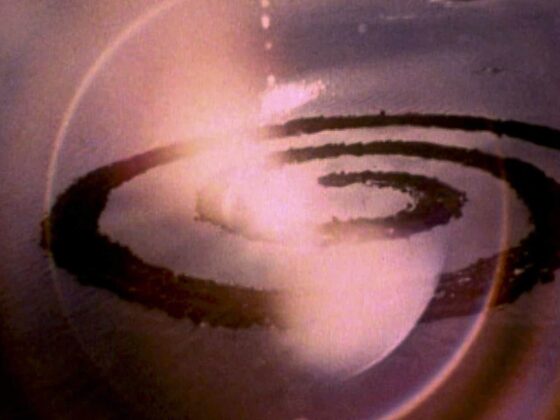 “Changes, circles spinning/can’t tell the finish from the beginning”—Moby Grape

Though not primarily known as a filmmaker, the great earthworks artist Robert Smithson (1938-1973) had cinematic inclinations, implicit and explicit. A line or two of pointed film criticism from his journals can be found in his collected writing, published a few years after his untimely death, but it was his more Borgesian musings on the medium and its relation to history that today retain their zing: “What I would like to do is build a cinema in a cave or an abandoned mine, and film the process of its construction. That film would be the only film shown in the cave.”

In a sense, Smithson did just that. His major film (in title and in function) is synonymous with his earthworks masterpiece, Spiral Jetty (1970). It is a documentary of the construction of the jetty and a portrait of the completed jetty itself; an unfolding of the project’s place in Smithson’s archaeological and historical sense of things, of the jetty’s place on the planet in relation to both the Great Salt Lake coastline in Utah and the infernal spewings of the distant, ever-exploding sun, and of Smithson’s personal space within those spirals. “Going nowhere, coming from nowhere,” we hear the artist intone somewhere midway through the film, his once-heard, forever-familiar hippie-wanderer vocal tones lulling us across the cataclysms he managed to inhabit, cosmic and cultural, as if he was casually stirring the salt ponds of time. The Spiral Jetty—remote and alone along the lake’s northeastern shore, 40 miles from much of anything, part petroglyph, part question mark, 15 feet wide, 1,500 feet long, boulders and potholes, clinging brine and mirrored sky—is in some ways about the destruction of art museums. Spiral Jetty is the film of that attempted destruction. Museums survived, and today, Spiral Jetty is virtually the only Smithson film shown in those caves.

Created with the assistance of earthworks artist Nancy Holt (Smithson’s widow), the 32-minute Spiral Jetty moves briskly from one shape and stria of associations to another: dinosaurs and their mummies, the pages of earth’s history literally torn out and strewn across its arid floor, a sound mix of trippy drones, old-school echo effects, and dirt-road rumble. Both elemental and divinely elevated, Spiral Jetty is a sublime experience—art film, art object, cave film, film cave—and accordingly, Smithson’s own writing on his film is some of the most beautiful film prose I’ve ever read: “The movie began as a set of disconnections, a bramble of stabilized fragments taken from things obscure and fluid, ingredients trapped in a succession of frames, a stream of viscosities both still and moving. And the movie editor, bending over such a chaos of ‘takes’ resembles a paleontologist sorting out glimpses of a world not yet together, a land that has yet to come to completion, a span of time unfinished, a spaceless limbo on some spiral reels. Film strips hung from the cutter’s rack, bits and pieces of Utah, out-takes overexposed and underexposed, masses of impenetrable material. The sun, the spiral, the salt buried in lengths of footage. Everything about movies and moviemaking is archaic and crude. One is transported by this Archeozoic medium into the earliest known geological eras. The movieola becomes a ‘time machine’ that transforms trucks into dinosaurs.”

Like the writings of J.G. Ballard, to which Smithson himself was partial, his jetty and his film evoke a lost world that somehow lingers still. Whether or not that makes the final image of Spiral Jetty a pointed homage to Michael Snow’s Wavelength (1967) must, for the moment anyway, remain but another of Smithson’s spirals, encrusted with salty time.

Posted in Columns, CS76, Exploded View, From The Magazine