Chuck Stephens/Columns, CS53, From The Magazine 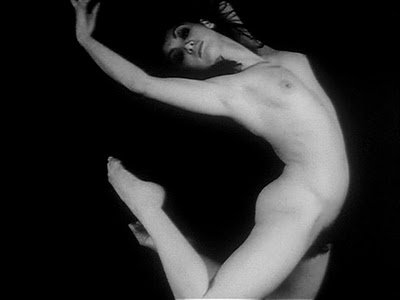 Scott MacDonald: “Have you assumed that people would look at your films on a rewind, as well as watch them projected?”

Bruce Conner: “I look at them on the rewind.”

The best way to watch Bruce Conner’s 1966 dance/film/masterpiece Breakaway is to look at it the way Conner would have as he made it: obsessively, frame by frame, backwards and forwards, stopping, starting, skipping around, backing up, sound slowing down and devil-warping into reverse. Sure, you’ll want to see it projected—or at least turn off your room lights and watch whatever bootlegged version you’ve got all the way through—first; never mind that Conner, a sculptor and collagist by nature, and one of the greatest film editors of all time, barely seems concerned with the projection end of things in his comment above (from a 1981 interview published in MacDonald’s 1988 A Critical Cinema). Watch it straight through…though, in a sense, that’s impossible, since the film’s midpoint is also its ending; it then re-begins, the film and soundtrack both palindromically repeated, backwards, end to beginning. As a matter of fact, just go watch Breakaway right now, five times, all the way through, before you do anything else with your life. Right now. Yes, it’s urgent. The rest of cinema can wait.

In Breakaway, Toni Basil—23 years old and ready to rule the world (she’s singing the A&M records “Northern soul” classic on the soundtrack as well: YouTube it)—is blown through the cosmos naked (and in various other states of dishabille), her alabaster street-ballerina beauty frugging and shimmying and stretching toward the sky as Conner zip-zooms in and out, exaggerating, distorting, and fleetingly emphasizing Basil’s pouty poses and passionate propulsions. Polka-dotted tights give way to white nighties and black bikinis and barrages of bright-white perforations in the celluloid (to rhyme with those dotted tights), and for a moment or two she’s frozen in mid-flight, her arms and legs arching backward, like some glorious au natural hippie-chick crescent moon, hovering against a backdrop of bottomless black velvet. Once you’ve seen Breakaway, it’s impossible to shake away this image. What was it about the angelic Antonia Christina Basilotta in the ’60s? She was magic in motion, and she liked to get naked in movies. You’ll all remember Basil as the topless Indian brave in Robert Downey Sr.’s Greaser’s Palace (1972), of course: breathlessly flouncing into some chief’s sweat lodge, mute, signing something about the arrival of a zoot-suited Christ. That’s her with Hopper (a longtime Conner cohort and collaborator), Fonda, and the freaky Karen Black, tripping naked in the graveyard near the end of Easy Rider (1969), too.

“I’ve got a 20-pound ball,” belts Basil in Breakway, “hanging by a chain around my neck.” There’s a recent book, published (tellingly) by October Books: Kevin Hatch’s Looking for Bruce Conner; in it you will find a lengthy and decidedly old school, theory-burdened, and fretfully “feminist” historiography and “reading” of Breakaway. Fortunately, the book also has lots of nice illustrations. A much more enjoyable, technically thoroughgoing, and insightful piece of writing on the film by Bob Davis is available at Senses of Cinema. “But no matter how powerful a formal analysis of his filmmaking process may be in suggesting how Conner’s rhythms affect us,” writes Davis, “there is much in Breakaway—in Basilotta’s brash and unbridled self-assertiveness, in Conner’s feverish camera style, and even in the uncomplicated honesty of Cobb’s catchy lyrics and tune—that defies verbalization…and must simply be loved!” Amen. Toni Basil floating naked through the blackness in Breakaway, the curls in her bramble caught just so in the light, is as lunatic and unforgettable as Melies’ glowing moon, grimacing at the sudden arrival of man in its eye.

Posted in Columns, CS53, From The Magazine