Chuck Stephens/Columns, CS51, From The Magazine 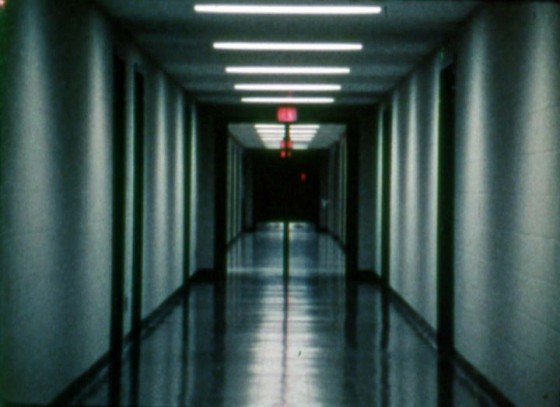 Start with the title, as you would a William Carlos Williams poem: Serene Velocity (1970)—tranquil and accelerating, blissful and fleet. Ladies and gentlemen, we are floating, faster and faster, in space.

Now look at the screen. SUNY-Binghamton grads will recognize the place: filmmaker Ernie Gehr taught there at the end of the 1960s, and there he photographed Serene Velocity—one of the central texts of the American experimental cinema, as epoch-defining as Snow’s Wavelength (1967) or Kubrick’s 2001—over the course of a long night, in one of academia’s hallowed halls, after all the students had gone. The camera’s vantage is fixed at a standing person’s eye level, and a vanishing point has been drawn at the image’s dead centre: some distance down a cement corridor, at the end of a cold and clammily florescent-blue hallway, wait a pair of closed doors, EXIT signs glowing red above them. The camera never moves, there is no editing, yet what unspools is one of the most propulsive and visually assaultive films ever made: blunt force nirvana for the occipital lobe. There is no static starting or stopping point. Every four frames, we are slightly closer to that exit, then every other four frames, slightly further away: Gehr zooms in with his lens, clicks off four frames, zooms out, clicks four again, zooms in. (There are also minor adjustments of exposure from frame to frame.) No “motion” is depicted, only those fixed points along the zoom, but once projected the effect of this in-camera accordionization of the rigid space of the hallway becomes stroboscopic whammo!

Op art with a pounding pulp pulse, Serene Velocity pokes you in the mind: serenity is velocity in this “piston-powered mandala,” as J. Hoberman once described the film he dubbed Gehr’s “shock corridor.” And perhaps accordingly, in the history of the literature on the American avant-garde, Serene Velocity has been treated as an almost entirely optical/conceptual accomplishment, and almost never as a political one. Curious, no? Should an empty building on a college campus in the 1970s seem so empty, what with tin soldiers and Nixon coming?

At least as early as 1959’s Time Out of Joint, Philip K. Dick had begun to see the American reality all around him as a kind of cover story; a loosely fabricated front which could be steadily unravelled to reveal the machineries of control and annihilation lurking below. (The Matrix [1999] began there.) Daniel F. Galouye’s 1963 novel Simulacron 3, upon which Rainer Werner Fassbinder’s infectious 1973 future-shocker World on a Wire is based, explored related realms: in both the drearily written novel and the endlessly stylish and precisely designed film, a cybernetics engineer for an electronics megafirm which specializes in simulated realities discovers that his own reality is also simulated. He fights a revolution of the mind to break free. We see him here, Fassbinder’s pumped-up little-man hero Fred Stiller (Klaus Löwitsch), lying flat on his back, in a rather familiar corridor.

Stiller has just come his firm’s computer lab, a place which looks suspiciously like the coke-mirror-as-cavern cover of Fripp and Eno’s No Pussyfooting, where several of Fassbinder’s stock company—future “Franz Biberkopf” Günter Lamprecht, angst-eaten “Ali” El Hedi ben Salem, a shockingly bald Kurt Raab—have converged to watch what seems to be a German television variety show of some ornate and near-distant vintage. It is, in fact, the reality just “below” their own: a computer-simulated world where lo-res versions of themselves act out imitation lives. World on a Wire, over the course of four delirious hours, never ceases its almost imperceptible bellows-motion, inward and outward, between multiple reality-dimensions: is the sterile conference room in the film’s final scene a glimpse of freedom, or just another box? Serene Velocity, over the course of 23 minutes, uses a fixed vantage to obliterate the experience of a fixed vantage; it’s a throbbing meditation machine that pulls quattrocento perspective inside out and leaves viewers looking for somewhere to cling. No wonder Stiller is reclining: he has attained serene velocity. He is, like the viewer of Ernie Gehr’s film, locked in a fixed position, and yet neither here nor there. 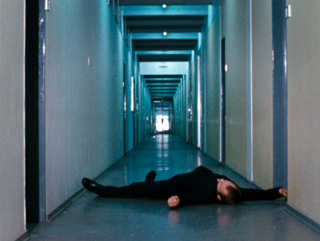 Posted in Columns, CS51, From The Magazine