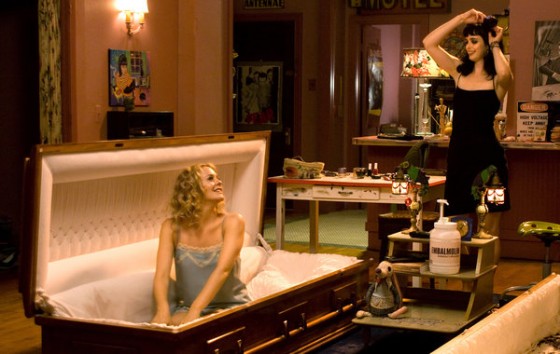 Several seasons back, before The Office became an unwatchable shell of its former self, the Dunder Mifflin crew had a customarily awkward Halloween party. Stanley was confused about Andy’s costume, mistaking him for a Twilight character. Andy patiently explained that he was in fact dressed as Bill Compton from True Blood. “Oh, that’s great,” Stanley grumped. “Now there’s some more damn vampires I’m supposed to care about!” This pretty much sums up our current pop-culture moment, so littered with assorted walking dead, lycanthropes, and creatures of the night that it’s getting tough for grad students to find much else to deconstruct. Although there is no sign whatsoever that we’re reaching a saturation point (i.e., a new embrace of non-allegorized, warm-blooded reality), one might reasonably think that Vamps, the latest comedy by Amy Heckerling, asks movie audiences to care about two vampires too many.

The film grossed less than $550 in its opening frame, and didn’t so much close as slam shut. This is, pun intended, a goddamned shame. Vamps’ theatrical failure was, to some extent, preordained. The release was cursory and contractual, as it seems like it’s really being handled as a direct-to-DVD property. Had it been released day-and-date, it might’ve made more of an initial splash. Nevertheless, the modestly budgeted Vamps is likely to recoup. It’s an ideal Tuesday night rental, and it should be assisted by the current success of one of its stars, Krysten Ritter (a.k.a. “the bitch in apartment 23”). Plus, for better or worse, Vamps is timely. Heckerling wrote Vamps before the present Drac-ubiquity, and although its contemporary release is hardly a cash-in, it can’t hurt.

But I’m not sure Vamps will find its audience through these usual channels, as it won’t tap into the same vein as all those other bloodsucker vehicles: Heckerling’s film is funny, and the vampires who dominate pop culture today take themselves with undeadly seriousness. In Vamps, Heckerling has produced a film that is, in equal measure, silly, corny, besotted by cinema, melancholy, feminist, literate, childlike, commercial, and fully auteurist. This is the kind of offbeat film that would have needed the slow build of support that comes from the film-festival circuit, yet it’s the type of film that festivals won’t normally touch with a ten-foot pole.  When cinematic works this cheeseball, heartfelt, and idiosyncratic do play festivals, it doesn’t go very well. (Consider Southland Tales [2006].) American comedies that aren’t of the indie-romantic variety are having a tough time, because unless they hit a particular sweet spot of subversion (e.g., Gregg Araki’s Kaboom [2010]), they have no clearly defined place in the landscape. As a result, significant works by master filmmakers like Abel Ferrara (Go Go Tales, 2007) and Hal Hartley (Meanwhile, 2011) land in the bargain bin.

Granted, Heckerling has a more populist sensibility, and isn’t as strictly concerned with articulation of mise en scène, although she’s certainly no slouch as a director of spatialized action. The basic plot of Vamps is extremely goofy. It’s a brief glimpse at the friendship of two party-girl vampires (or ELFs—“extended life forms”). Goody (Alicia Silverstone) was turned in the late 19th century, but lies about her “age.” Her BFF Stacey (Krysten Ritter) has only been undead since the ’80s, and Goody doesn’t want to seem too old-fashioned, so she claims to be from the ’60s. A surprising amount of incident unfolds within a relatively brief running time, mostly because Heckerling’s light tone insures little is at stake. Van Helsing (Wallace Shawn) works at Homeland Security and uses jury duty to persecute ELFs, but this problem is resolved quickly. Stacey ends up dating Van Helsing’s son, which is a conflict for about 15 minutes. Goody runs into an old flame (Richard Lewis!) from her college days as a ’60s radical, and has to explain that, yes, she’s a vampire.

The ladies are also having problems with Cisserus (Sigourney Weaver), their stem (or “maker” in True Blood lingo), because her murderous rampages are drawing undue attention. This crisis, which involves the older, more powerful woman lording her entitlement over Goody, Stacey, and virtually everyone else, is the closest thing Heckerling gives us to a throughline, and implies that some women are not invested in making the road easier for those who come behind them—surely a concern for anyone in “the business.” Aside from this intergenerational conflict, each time a potential narrative complication is introduced, it’s dispatched almost instantly. This is Vamps’ big gambit, and its spectatorial litmus test. Heckerling risks making the film look both frivolous and “poorly written” by conventional standards (and thus risks alienating her audience). This is because Vamps really cares only about its subtext.

In the animated prologue, Goody provides a quick history of her vampire life. She articulates some basic truths that most narratives of the undead elide, such as noting how miraculous it was when the electric light was invented, as it returned something she lost after her transformation. She also discusses the major urban and technological changes she’s witnessed over the years, the “flickers” being her favourite. Heckerling shows us Méliès’ Trip to the Moon (1902), while Goody enthuses over Chaplin and Keaton. In short, Goody is a child of modernity. She lived through the radical shifts in perception that Walter Benjamin, Wolfgang Schivelbusch, and others described. In fact, when Stacey and Joey Van Helsing study for their Intro to Cinema night class, Stacey specifically cites Siegfried Kracauer’s From Caligari to Hitler. (Van Helsing doesn’t get it. What does Hitler have to do with the movies? When you’re free to walk around in the daytime and live as the hunter, who needs subtext?)

Vamps is filled with cinema history, but in a manner neither overtly referential not superficial. We “get” the citations—key clips from Nosferatu (1922), Vampyr (1932), Metropolis (1927), The Cabinet of Dr. Caligari (1920)—but they aren’t there to allow Heckerling to show off (they’re far too obvious), nor do they imply some sort of conceptual heft. Instead, the interjection of cinematic history is decidedly playful, partly because it’s indirectly filtered through Goody’s consciousness. She’s a normal film lover for whom all these old movies are, if not “contemporary,” at least part of her active (un)living memory. And in that respect, Goody reflects Heckerling’s own cinephilia, as a kind of functional/functioning phenomenology, rather than the psychopathology that cinephilia is often castigated as. Being an undead immortal and a lover of cinema are two pathogens that cancel one another out, yielding a healthy framework for a life “in the dark.”

Goody explains to Van Helsing Sr. that she agreed to be turned to survive a cholera outbreak and raise her two children. But after this, her life was largely one of spectatorial disengagement. So for these vampires, being undead is a state of perpetual non-commitment, exemplified by nightclubbing and one-night-stands. It’s about loneliness and sacrifice. And ultimately, this is what makes Vamps such a special film. There are so many vampires in pop culture right now, but why are we supposed to care about them? Bram Stoker’s original was a story about exoticism and mobility, but our more recent vampire contingent is cut to the measure of current sociological demands. Twilight is about remaining in the throes of teenage stupidity forever, of literally never leaving high school. The Vampire Diaries is an Eve Kosofsky Sedgwick primer, an all-male homosocial revue as triangulated through one rather unremarkable young woman. True Blood is a conservative take on queerness, where everyone’s either decadent or miserable.

But Vamps is about time, its acceleration and inevitable slowing, its expanse and its finitude. When we meet Stacey and Goody, they pop out of their coffins with jerky cartoonish movements. It’s a dead ringer for the beginning of Vera Chytilová’s Daisies (1966), all perkiness and possibility: they have the world ahead of them. But Goody also carries the long, complicated past—her own, that of Manhattan, of modernity—everywhere she goes. Heckerling provides point-of-view shots in which Goody looks at a building and “sees” all the changes it’s undergone over the decades, and those changes are registered on/as film. The film’s penultimate scene is an aching tribute to what immortal eyes might see, as Goody ages into disintegration, her vision peeling away layer after layer of Times Square’s palimpsestic memory. Being a vampire, Heckerling proposes, is not unlike being a historian, forced to bear witness and largely withheld from intervention. Time embalmed. (By extension, we can intuit that Vamps’ memories are uniquely cinematic because they relied on Goody’s physical presence, and are therefore indexical. Goody’s perplexed plaint regarding the accelerated pace of digital technology is not a Luddite’s rant; it’s the eulogy of a mourner.)

This scene, in addition to clarifying the emotional logic of Vamps, also brings Heckerling’s feminist subtext front and centre. Here we have the auteur reuniting with Silverstone, but an ingénue in Clueless (1995), the biggest success either of the women would have in their careers. Silverstone never became the movie star she was meant to be, largely because of sexism. (First she wasn’t “thin” enough, then she wasn’t “young” enough.) It’s no accident that Vamps pairs Silverstone with current It-girl Ritter, that the plot revolves around Goody lying about her age, or that Vamps is finally about a beautiful young woman giving her life to the Age of Cinema, only to be left crumbling to dust. Stacey, not coincidentally, becomes flesh and blood, aging to the ripe old age of 40 with barely a blemish. (“I never smoked, drank, did drugs, or sunbathed!”) Ritter is 31. Silverstone is 36. Long may they run.