By Celluloid Liberation Front In Columns, CS76, Deaths of Cinema, From The Magazine 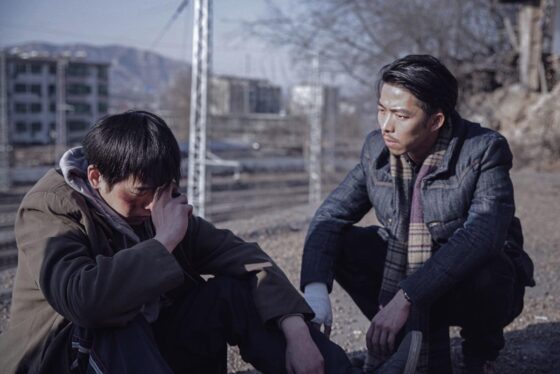 China’s growing economic clout and rising prominence in world affairs can help illuminate some essential if unflattering traits of the business we call show. Not even a decade ago, any mention of China was usually made in relation to the draconian censorship filmmakers there had to face, often at the expense of their own artistic freedom, if not worse. As the country’s finances improved, and its box office became something to be courted at the cost of self-censorship, the word “China” in trade magazines started being associated with much nobler notions. Suddenly, what had once been a veritable hellhole for freedom-loving directors became the dream co-production partner, a place where the inauguration of the Qingdao film studios in 2013, a mere $7.9 billion project, attracted the likes of Leonardo DiCaprio, Nicole Kidman, and John Travolta, who apparently had no qualms about lending their liberal star power to a totalitarian “communist” regime. While the irony may have been lost on many, or at the very least conveniently downplayed, China’s case is nothing but a cheerful reminder of what really drives the film industry. Like the world’s greatest power before her, China is using the wonders of cinema as a soft-powered machete on its way to global dominion. Unafraid to emulate Hollywood’s diplomatic persuasion, the world’s fastest-growing economy is already employing the seventh art for self-branding purposes, projecting the idyllic image of a prosperous land of happiness and economic opportunity. Which is where independent filmmakers usually come into the picture, with the vital intent of ruining it completely.

Chinese independent cinema is on the verge of extinction, which makes Hu Bo’s first and last feature film even more remarkable. A devastating counterpoint to the propagandistic frolic and box-office bonanza of franchises like Detective Chinatown or Wolf Warrior, Hu Bo’s An Elephant Sitting Still, which premiered earlier this year at the Berlinale, paints a thankless portrait of contemporary China where many of the country’s glaring contradictions are exacerbated to the point of no return. Taking place over the course of a single day in a featureless town in northern China, the film starts with its four protagonists, each for different but equally dismal reasons planning to escape the dread of daily life. Local thug Yang Cheng (Zhang Yu) looks on as his best friend, whose wife he has slept with, commits suicide. Simmering with anger towards his abusive father, Wei Bu (Peng Yuchang) shows his heels after pushing the school bully down a staircase, while his classmate and crush, Huang Ling (Wang Yuwen), reaches for her mother’s jugular when the latter finds out she’s been dating the married vice-principal. If youth doesn’t seem to be the ideal recipient for happiness, old age isn’t any better as the case of Wang Jin (Liu Congxi) proves: he’s an old pensioner waiting in anguish for his son to send him off to a nursing home. As life pushes them into a corner, there is no other choice but to run away. But where to? Awaiting in the far-north town of Manzhouli is an apathetic elephant which, legend has it, sits still in a zoo contemplating life in all its meaningless absurdity. It is indicative of the protagonists’ state that the promised land they’re trying to reach features a pachyderm that refuses to eat or move.

Born in 1988, Hu Bo graduated from the Beijing Film Academy in 2014 with a degree in Film Directing, and in the same year he made two shorts: Distant Father, which won Best Director at the Golden Koala Chinese Film Festival, and Night Runner, which was selected by the Taipei Golden Horse Film Academy. In 2016, what was to become his debut feature—at the time still in progress—was selected by the FIRST International Film Festival Financing Forum, and Hu attended the subsequent training camp where he worked under the supervision of Béla Tarr (which is when he made the short Man in the Well). Some critics pointed out the latter’s influence on Hu’s work, especially in relation to the long tracking shots that make up most of An Elephant Sitting Still’s 234 minutes. But whereas Tarr’s cinema articulates itself through metaphysical absorption, Hu’s films retain the carnality of punk and operate on a lower stratum of perception, like an obsessive bassline from a Joy Division song. Despite his very young age, the craft and style of his opera prima are anything but derivative, and are in fact the outcome of an uncompromising vision. An early supporter and financial backer of the film, the Chinese auteur Wang Xiaoshuai, was reportedly dissatisfied with the overlong director’s cut, and the name of his production company has since disappeared from the film’s credits; the rights of the film have since passed on to Hu’s parents. (Wang also submitted a recut, drastically shorter producer’s version to festivals in 2017.)

There is in fact very little if anything in the film that can be interpreted as redemptive or even remotely edifying. As the director stated in an interview, “There is simply no ideal life, it is only a matter of choosing what kind of regrets you are willing to live with.” This is a claim that An Elephant Sitting Still amplifies into a pictorial dimension where relations, very much like the landscape that frames them, seem to be poisoned beyond repair. The vast generational gap that divides Chinese millennials from their parents is tragically exemplified by Bu’s relationship with his father and Ling’s with her mother; incommunicability has warped into overt hatred. The only paternal teaching Bu gets from his old man is how to build a truncheon that leaves no marks on the skin. Fuelling the algid distance that keeps them apart is the traumatic speed at which things have changed in China within the span of only one generation. So profound and rooted is the estrangement between people in the film that not even a shared language, a native land, or blood ties are able to bridge it. Not that relations among peers are any easier: when Bu and Ling meet up, not a single trace of his infatuation with her can be detected in their conversations. The level of emotional repression is such that virtually every exchange in the film implies the possibility of an aggressive confrontation, with the film’s livid photography chromatically translating a ubiquitous feeling of resentment. The director’s own words elucidate further: “I hope the young people of our age will not undermine their own lives, because the emptiness that the flesh-eating savages faced in the woods, or a dying soldier faces on the battlefield, is not so different from the emptiness that they face today.”

Mostly composed of pensive tracking shots that circle around the characters as if looking for clues to their despair, the film hardly ever strays from them, leaving the background almost always out of focus. We learn of the outside world through the disclosure of the characters’ inner torment. Even when filming conversations, Hu avoids the classic shot-reverse shot, for it would inevitably suggest, at least visually, a dialectical possibility that the screenplay categorically rules out. Life appears to have been sucked out of everything and everyone: the unearthly pallor of greys, putrescent greens, and dispirited blues is as colourful as it gets. With human agency reduced to its basest instincts, the only way for the four protagonists to come together is by mere coincidence. Their convergence towards the sitting elephant is inertial rather than proactive, as much of their previous lives must presumably have been. The only moments where life is not stoically endured but actually lived are when the characters plot to or deliberately harm someone, be it a random passerby or a next of kin. Room for reciprocity has been privatized, and no one in the film seems to be able to afford it. It is this sensation of compulsive solitude that Hu Bo’s film not only explores but also manages to render in aesthetic terms. While the hypnotic pace of An Elephant Sitting Still hardly ever falters, the thinly stretched plotline leaves ample space for philosophical introspection, some of which, one suspects, gets lost in translation.

But the written and spoken word remain ancillary in a work that is primarily cinematic rather than literary, where images are invested with an existential agony so vivid that it can almost be touched. (The film is an adaptation of one of Hu’s stories collected in Huge Crack, one of the two books he published under the pseudonym Hu Qian.) Despite the intimate focus on individual existences of no exceptional significance, the film possesses a growing breadth that elevates the misery of the lives it chronicles to the narrative, novelistic heights of an epic. Though obviously stemming from the director’s own worldview, which is admittedly averse to any form of hope, the film resonates on a wider scale in that it exposes the painful inconsistencies of a country overwhelmed and left stunned by economic growth. “Class distinctions did not exist decades ago,” observed the director. “The youngsters today are burdened with something of enormous weight on their minds the day they step into the college gates.” It is this existential burden that the film makes visible, and that all the characters are trying to escape on their way to Manzhouli.

Hu’s talent was confirmed in Man in the Well, which received its international premiere at the Locarno Festival where Elephant was also screened in homage to the late Pierre Rissient. Man in the Well is possibly even bleaker than Hu’s feature debut, as here all is already lost: the film in fact takes place in a post-apocalyptic wasteland. Two young souls wander the ruins left in the wake of a nondescript disaster that has obliterated every living being from the face of the earth except for the unfortunate person the title alludes to, who will serve as the protagonists’ breakfast. Any form of salvation has already been excluded, and the humanity Hu Bo describes is one reduced to its survival instinct and nothing more. It is now literally impossible not to trace back to these two films the director’s tragic decision to take his own life in October 2017, before An Elephant Sitting Still was completed, though we could also ask ourselves how much of his own cynical perspective corresponds to reality. For if on the one hand the film represents its director’s personal take on the interpersonal dynamics at work in contemporary China, on the other hand the world it captures is not entirely fictional either. Possibly the film’s comfortless plea stands on the slippery crest that divides Hu’s depressive outlook from an outside world that does little to disprove it. In any case, rather than commemorate the birth of a cult figure, we should lament the loss of a precocious talent, one that thought that “the truly valuable things in life lie in the cracks of the world, and not pessimistically so.”

Tagged with → Hu Bo
Transit (Christian Petzold, Germany/France) First Person Plural: On Orson Welles’ The Other Side of the Wind