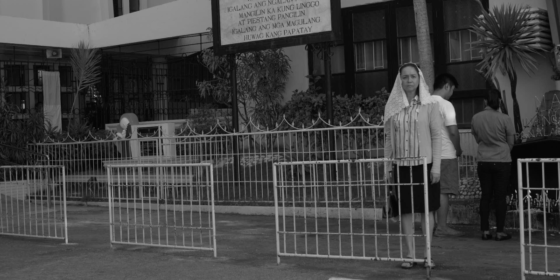 If there’s someone who thinks that The Woman Who Left is a minor Lav Diaz film—because it’s the second one this year, or because, at 227 minutes, it’s “short” for him (film critics’ clichés are both endless and predictable)—let’s say up front that this is one of his best. And this is not a coincidence. The film is part of Diaz’s greater project: dramatizing the history of the Philippines as the sign of a sort of philosophical fragility of the world (it’s not by chance the film is inspired by Tolstoy’s short story “God Sees the Truth, But Waits,” a parable about murder and forgiveness). Diaz also continues to challenge himself by looking for a new identity of cinema, rewriting rules, narration, and the senses of time and space. Just think about his two previous films, From What Is Before (2014) and this year’s Lullaby to the Sorrowful Mystery: the first tells the story of a perpetual civil war, while the second is an effort to make cinema an abstract, mysterious, and ambiguous experience. Diaz’s idea is, in fact, that there are no rules in cinema, in the same way that there are no easy answers in life.

The Woman Who Left is the story of Horacia (the legendary Charo Santos-Concio, who has returned to acting only for Diaz), a wrongly convicted woman who leaves prison and searches for the man who wronged her. It starts on June 30, 1997, the day that Hong Kong was returned to China, provoking a Filipino-Chinese community exodus. From there Diaz fashions an inexplicably transcendent journey to the end of the world, deeply soaked in melancholy and open to almost all possible interpretations. The more Horacia goes on her journey, the more the world seems to collapse, and while humanity falls, its misery takes the shape of both pure light and emptiness at the same time. She’s a ghost looking for ghosts, exactly as Diaz looks for what we always miss in the act of seeing itself. There’s no hope in The Woman Who Left, merely the image of what disappears.