What’s Out of Frame: Kazik Radwanski’s Scaffold and Ricky D’Ambrose’s Notes on an Appearance 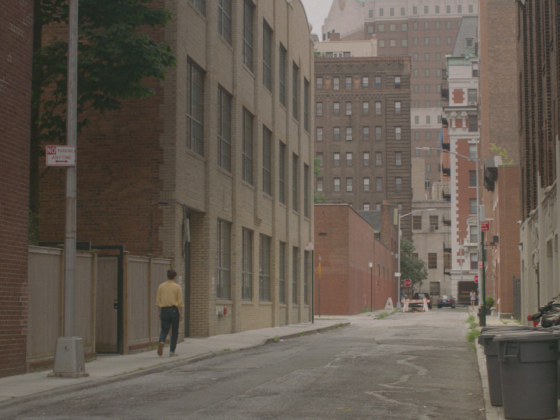 Notes on an Appearance

Scaffold and Notes on an Appearance screen together on Thursday, January 17 at TIFF Bell Lightbox as part of the screening series MDFF Selects: Presented by Cinema Scope and TIFF.

With his two most recent short films, Cutaway (2014) and Scaffold (2017), Toronto-based filmmaker Kazik Radwanski has deliberately offered an alternative formal approach from that of his features Tower (2012) and How Heavy This Hammer (2016). While the features revolve around long-take close-ups of their respective protagonists’ faces, these shorts avoid faces altogether. Cutaway follows a construction worker through elliptical snippets of his daily life (at his job, shopping, drinking, texting, etc.) exclusively through shots of his hands, cleverly teasing his inner world and pointing toward a conflict that exists entirely offscreen. Similarly, Scaffold primarily focuses on the abstracted limbs of two Bosnian immigrants who are fixing up a patio, their casual but revealing exchanges interspersed with glimpses of the surrounding neighbourhood, the home they’re working on, and its female owner.

At first appearance a study of the quotidian everyday, Scaffold expands into a resonant portrait of displacement and loss with a minimum of contextual details and a considered mise en scène that is at once expressive and points to what’s outside of frame, conjuring reality through subtle touches and asking the viewer to consciously complete the picture for themselves. There’s a stinging irony to the labourers working on a house when they are themselves far from home, the transient structure of the scaffolding on which they work adjacent to the woman’s house, which, obviously, has a fixed sense of place. Far from a stylistic gimmick, Radwanski’s refusal to show his characters’ faces poignantly echoes the way such people escape our notice in our own daily lives. Without depending on the emotive capabilities of the human face, Scaffold elicits our sympathies for its subjects by compelling us to weigh their situation and its implications first and foremost, and as they gaze at and remark upon their surroundings, recognizes them as agents of observation themselves.

Notes on an Appearance, the bold debut feature from New York-based filmmaker Ricky D’Ambrose, is another work of precise abstraction, employing a Bressonian emphasis on hands and gestures and using a minimum of in-frame detail to create something beyond what we see, ingeniously crafting a narrative that never fully forms and that begs audience participation. The film follows a young man named David (Bingham Bryant) who returns home after living abroad with the intention to assist his friend Todd (Keith Poulson) with his research on a controversial (and fictional) philosopher named Stephen Taubes, whose radical espousal of violence as a legitimate political tool pitted him against liberalism and conservatism alike. À la L’Avventura, our would-be protagonist abruptly disappears, his absence casting a shadow over the rest of the film; the traces of his presence are felt in the notes and objects he leaves behind, much like how Taubes’ presence is felt in newspaper clippings and book covers.

Working in the 4:3 aspect ratio, D’Ambrose alternates between shots of tabletops, insert shots of various, mostly text-based objects that provide expositional clues and context, and portraiture of the thirtysomething Brooklynite intellectuals that make up the film’s cast of characters. Mostly taking place in domestic spaces and cafes, Notes points to a violent outside world beyond the safety of the walls that surround its characters—in other words, what is in the frame and what is out. This sets up a dynamic between the realm of the theoretical and that of immediate reality, a gap that rarely reconciles in an easy way but always threatens to close.

Thought, action, and reality appear to be neatly separated categories in a capitalist, class-based society, a notion that underlies and troubles Notes on an Appearance in provocative and intriguingly ambiguous ways. There’s something productively disconcerting about the film’s core and peripheral mysteries, and as it gives way to an existential malaise that’s difficult to pin down, questions about personal responsibility and navigating the world begin to surface. With a sparse and rigorous style, D’Ambrose impressively draws a vision of the world made fuller by its own incompleteness, and offers a discreet yet telling window into his generation’s complex and quietly combative relationship to a present seemingly indifferent to those who wish to reshape it.