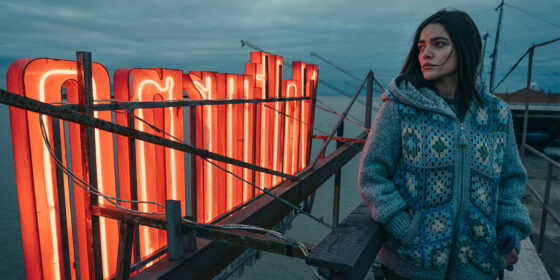 The Vice of Hope gets its title from a rather sanitized version of a phrase spoken several times during the course of the film. What the characters are actually referring to is “the bullshit of hope,” and although Edoardo de Angelis’ film does end on a somewhat upbeat note, there is no question that the milieu it depicts is one where wanton despair and hopelessness hold sway. In the run-down quarters of an old yacht club, Maria (Pina Turco) helps her surrogate mother and a madame called Aunt Mari run a brothel. But this is just a cover business. The real money comes from selling the young women’s babies in an illegal surrogacy ring.

While dealing with actual social problems of criminality and gendered poverty, The Vice of Hope manages to avoid the dull, prescriptive social realism so typical of “issue pictures.” Instead, there is a stark abstraction and artifice running through the film, from its opening images of the young Maria being fished out of the harbour with a net, to the garish neon and electric lights of the yacht club and the consistent magic-hour cinematography. De Angelis is a stylist of the Matteo Garrone/Ferzan Özpetek school, frequently using wide-angle imagery to turn otherwise naturalistic sequences into flattened panoramas.

Although The Vice of Hope is notable for its almost all female cast—Massimiliano Rossi, as a key male character, is the exception—virtually everything hangs on Turco’s performance as Maria. She is a conflicted figure, a “middleman” who sells her sisters down the river, providing them with comforting words as she facilitates the theft of their children. When she unexpectedly becomes pregnant herself, she is suddenly in need of help that she is acutely aware she’s in no position to demand. Everyone’s hands are dirty, and yet redemption might still be possible for Maria. Plus, as the film makes clear, it helps to be white.